In April, Justice Barrett urged everyone to "read the opinion." I did so with Netchoice LLC v. Paxton, and so can you. It will only take about fifteen seconds. Indeed, my prefatory remarks here are longer than the opinion itself. Ready, here goes!

The application to vacate stay presented to JUSTICE ALITO and by him referred to the Court is granted. The May 11, 2022 order of the United States Court of Appeals for the Fifth Circuit staying the district court's preliminary injunction is vacated.

Why was the stay granted? Who knows? The shadow docket works in mysterious ways. Indeed, in Doe v. Mills, Justice Barrett laid out an intricate framework to explain when the Court should grant emergency relief. Does the Netchoice case meet that standard? Who knows? Barrett was silent. Alas, there is no opinion to read. Indeed, Barrett has been silent in many cases on the shadow docket. By my count, since Tandon v. Newsom in April 2021, Barrett has ruled against every single religious liberty claimant on the shadow docket. Swipe right for big tech, swipe left for the Becket Fund.

The "read the opinion" line illustrates one of my ongoing concerns with Justice Barrett. In her brief tenure on the Court, she has made several unforced errors in public speeches. You can't tell people to "read the opinion" when you don't write an opinion on the shadow docket. It is such an obvious sinkhole that she fell into. Likewise, her "partisan hacks" line at the McConnell Center, of all places, was tone deaf. Both of these lines came during Q&A, so they were not part of her prepared remarks. Yet, she exercised poor discretion. But more importantly, she created wedges from which people can criticize her, and pressure her to adhere to certain positions.

Even before these two statements, I was extremely worried about the risks of Barrett's lucrative book deal. In April 2021, I wrote:

Second, my greatest fear for this book is that Justice Barrett will set lofty standards for judging that her detractors will use to criticize, and even pressure her. Let's say she praises the importance of stare decisis. What better way is there to keep feelings out of law than to stand by precedent? She may even cite her decision not to overrule Smith in Fulton. (She very conspicuously signaled that position during oral argument). Forevermore, if Justice Barrett wishes to overrule some precedent, her book can be used against her. . . . Justice Barrett's job is too damn important to make unnecessary concessions in a book. Anything that can be used to exert influence over her in the future is an unforced error. Why? Why write this book now? Why give Justice Kagan ammunition to cow you into submission?

Why is Justice Barrett making these errors? I have my own theories. Quickly peruse then-Professor Barrett's Senate Judiciary Committee questionnaire from 2017. Section 12.e asks the nominee to "List all interviews you have given to newspapers, magazines or other publications, or radio or television stations." At that time, Barrett was a professor for approximately fifteen years. Barrett lists 13 items. Most of entries are internal Notre Dame media sources. Barrett had only three interviews on national media. She was on NPR's On Point in 2005 and 2015, and appeared on CBS News in 2016. Section 12.a asks the candidate to list all "letters to the editor" and "editorial pieces." Barrett has none, though she does list comments she left on Prawfsblawg in 2008. 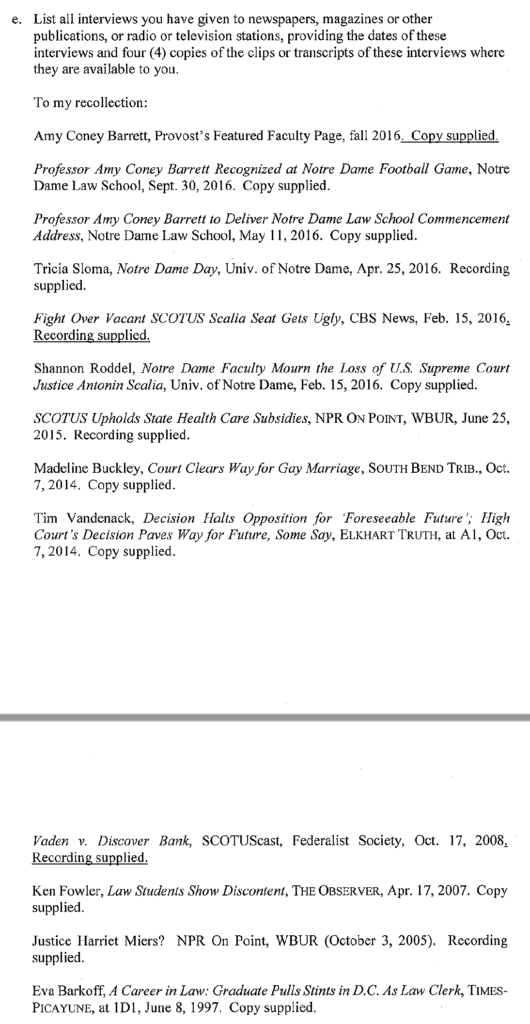 By contrast, then-Professor Stephanos Bibas, who was a professor for roughly the same period, had more than thirteen pages of media hits. Indeed, his questionnaire is nearly three times as long as Barrett's.

I've long worried about Barrett's lack of media experience. It is not a skill that comes naturally. (Over the years, I've worked very hard on my press chops; there is a reason reporters keep calling me back.) And on at least two prominent occasions, Barrett blundered. Twice, she made a tone-deaf statement that would be instantly turned around against her, and pin her into taking certain actions. She treats these discussions like she is still a law professor–open and frank high-minded discourse without much concern for the consequences. Alas, that life of near-anonymous intellectual curiosity must be relegated to her past. Take a page from Justice Kagan's CV, and focus on the job at hand.

Barrett should keep these lessons in her mind for future public events, and for certain when writing this book. Then again, Barrett said at Notre Dame that she has "a policy of trying not to read any coverage that addresses" her. So this message may never make it to her.