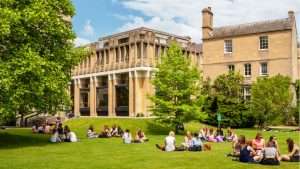 Libertarians have historically had an ambivalent and occasionally even antagonistic attitude towards higher education, in part because academics and administrators are overwhelmingly left-wing, including many who have a deep antipathy to libertarianism. That hostility, of course, is sometimes reciprocated.

Some libertarian criticisms of universities are well-founded. But it's also important for libertarians (and others) to recognize that the net effect of higher education is to make people more libertarian! A large-scale new study of British college graduates by political scientist Ralph Scott confirms and extends previous findings from the United States. Here is his summary of the results:

An individual's level of education is increasingly significant in explaining their political attitudes and behaviour, with higher education proposed as a new political cleavage. However, there is limited evidence on the causal effect of university on political attitudes, due to self-selection into educational pathways. Addressing this gap, this article estimates the change in political values that occurs within individuals who graduate from university by applying longitudinal modelling techniques to data from the 1970 British Cohort Study, overcoming the selection problem by accounting for time-invariant confounding. It provides the first causal estimate of higher education specifically, finding that achieving a degree reduces authoritarianism and racial prejudice and increases economic right-wing attitudes. This has important implications for the study of politics: as populations become more highly educated on average, we should expect continuing aggregate value change towards lower levels of authoritarianism and racial prejudice, with significant consequences for political behaviour.

By "economic right-wing attitudes" Scott essentially means support for free markets and limitations on government spending and regulation. By "authoritarianism," he means not support for dictatorship, but "support for social order over individual liberty," including on such things as weakening protections for criminal defendants, and the censorship of media to uphold traditional moral standards. This use of the term "authoritarian" is common in academic social science, though it is can be confusing for nonexperts. "Racial prejudice" means roughly the same thing as in ordinary usage. Among the questions Scott uses to measure it is opposition to interracial marriage and to people of a different race moving into your neighborhood.

On all three dimensions Scott finds that higher education moves people towards more libertarian positions, even if he doesn't use that term. For obvious reasons, libertarians oppose most government intervention in the economy and on "social" issues. Libertarianism is also deeply at odds with racial bigotry, which is both intrinsically inimical to an ideology that emphasizes individual rights over ethnic group loyalty (Ayn Rand rightly called racism "the lowest, most crudely primitive form of collectivism"), and a major source of oppressive government policies.

In each case, the impact of higher education holds true, even after controlling for other variables, including the student's family background and pre-college attitudes.

As Scott notes, these findings are consistent with those of previous research on the impact of higher education in the United States. Much of the latter research is summarized by libertarian economist Bryan Caplan in his important 2018 book, The Case Against Education (which I reviewed here). As the title indicates, Caplan is far from uncritical of higher education. But he does acknowledge its libertarianizing impact.

Scott discusses some possible reasons why higher education leads to more libertarian attitudes. With respect to racism and "authoritarianism," one obvious reason is that these ideas are decried by most academics and university administrators. In addition, going to college can expose students to people from different racial and ethnic backgrounds with whom they share common interests. They may take classes together, participate in extracurricular activities, and so on. This may lead them to realize they have more in common than previously thought, thereby breaking down some of the natural human tendency towards suspicion of members of "out" groups.

Perhaps the most surprising finding  of this and previous studies is that college education increases pro-free market economic beliefs. Obviously, that is not the view of the vast majority of faculty and administrators, and probably not the effect that most want to have on students.

The causes of this tendency are far from fully understood. But one factor may be courses in economics and finance, which many students take. Data indicates that studying economics increases pro-free market attitudes among students, even though the vast majority of economics professors are far from libertarian. Even left-liberal economics professors usually cover a variety of free market ideas in their courses. Many of these are counter-intuitive, and cut against the tendency to believe that the economic world is a zero-sum game in which government intervention is routinely needed to protect some groups against others.

Obviously the vast majority of UK and US college graduates are not libertarian. Studies like Scott's do not show that higher education makes people full-blown libertarians; it has that effect only on a small minority. Rather, the point is that it tends to make people more libertarian than they would be otherwise.

For libertarians, the implication of this research is not only that we should have a more favorable view of higher education, but that the university world is potentially fertile ground for recruiting new supporters. A group (students) that is already moving in an incrementally libertarian direction on many issues can more easily be influenced to go further than most other segments of society. This factor works in tandem with the reality that younger people are, on average, less set in their views than older ones, and thus easier to persuade to consider new ideas. Libertarians would do well to increase investment in groups like Students for Liberty and the Institute for Humane Studies, which focus on outreach to students and younger academics.

Another useful lesson for libertarians here is that, at least among the young, support for economic liberty tends to rise in tandem with racial and ethnic tolerance and with support for social freedom. Around the world, ethno-nationalist and socially conservative political movements tend to view economic liberty with suspicion, when they are not outright hostile to it. They fear (often rightly) that economic freedom will undercut some traditional values, and also break down the ethnic and cultural barriers nationalists value. Thus, it is no surprise that the US Republican Party has become more hostile to free markets and property rights as it has become more nationalistic. Right-wing nationalist movements in Europe, such as  Viktor Orban's movement in Hungary, and Marine Le Pen's National Rally in France (formerly called the National Front) are also economically statist.

The link between conservative nationalism and statism was long ago noted by the great libertarian economist F.A. Hayek:

Connected with the conservative distrust if the new and the strange is its hostility to internationalism and its proneness to a strident nationalism…. It is no real argument to say that an idea is un-American, or un-German, nor is a mistaken or vicious ideal better for having been conceived by one of our compatriots.

A great deal more might be said about the close connection between conservatism and nationalism . . . I will merely add that it is this nationalistic bias which frequently provides the bridge from conservatism to collectivism: to think in terms of "our" industry or resource is only a short step away from demanding that these national assets be directed in the national interest [by the government].

This does not prove there can never be any useful cooperation between libertarians and conservatives. Still less does it prove that the former will always see eye to eye with the political left. But it does suggest that cosmopolitan liberals have more affinity for free markets than nationalistic conservatives.

None of the above should cause libertarians to ignore the many flaws of the higher education system. It remains true that there is lots of wasteful spending in academia, that many faculty and administrators behave badly in various ways, and that too many are intolerant of opposing views (including, in some cases, libertarian ones).

These findings do not even prove that libertarians (or anyone else) should necessarily want to increase the percentage of high school graduates who go on to get college degrees. For many people, the benefits of higher education are likely to be outweighed by costs. There is a lot of truth to Bryan Caplan's critique of the education system along those lines.

But libertarians should be aware of the ideological impact of higher education and the ways in which it helps our cause. And we should adjust our political strategy accordingly.

While Scott's and other scholars' findings on the effects of higher education should cheer libertarians (who haven't had much else to cheer about in recent years!), they are bad news for right-wing nationalists. The latter's growing hostility towards the university world is somewhat understandable. Not only is academia filled with people who oppose their values. It also tends to influence students against them.

For left-wingers, the findings are equivocal. They should be happy to see that going to college moves people what they see as the right direction on "authoritarianism" and rejection of racism. But, obviously, they are likely to decry the impact on students' economic policy views.

UPDATE: I have corrected the initially incorrect link to Ralph Scott's article.