In the five decades since Lemon v. Kurtzman, there have been more puns about lemons that I could ever count. Perhaps the best barb came in Justice Scalia's Lamb's Chapel concurrence:

As to the Court's invocation of the Lemon test: Like some ghoul in a late night horror movie that repeatedly sits up in its grave and shuffles abroad, after being repeatedly killed and buried, Lemon stalks our Establishment Clause jurisprudence once again, frightening thelittle children and school attorneys of Center Moriches Union Free School District. Its most recent burial, only last Term, was, to be sure, not fully six feet under: our decision in Lee v. Weisman, 505 U. S. —-, —- (1992) (slip op., at 7), conspicuously avoided using the supposed "test" but also declined the invitation to repudiate it. Over the years, however, no fewer than five of the currently sitting Justices have, in their own opinions, personally driven pencils through the creature's heart (the author of today's opinion repeatedly), and a sixth has joined an opinion doing so.

Indeed, the Justice Scalia bobblehead depicts him shoving a pencil through a lemon. 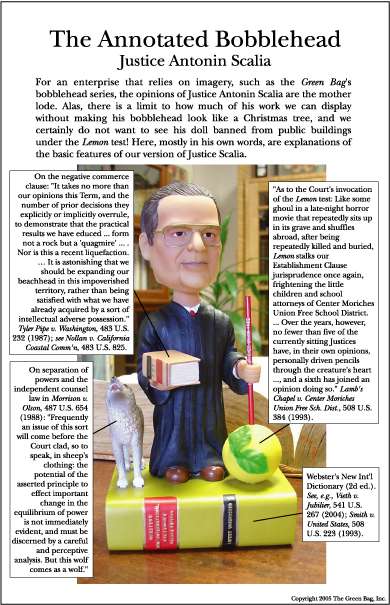 Today during oral argument in Kennedy v. Bremerton School District, Paul Clement riffed on Scalia's dissent, and improved on it! Enjoy this colloquy between Clement and Justice Kavanaugh:

MR. CLEMENT: Sure, but it's a --it --it's a stubborn --it's a stubborn fruit, and I don't think just pushing a pencil through it has done the trick. I mean, you really have to slice it in half and make clear to everybody--

Will Justice Kavanaugh merely jab another pencil into the stubborn fruit? And Justice Barrett? Or will they slice it in half, and make lemonade out of lemons? (Hopefully the last Lemon pun I'll have to make.)