I'm delighted to report that Prof. Steven Lubet (Northwestern) will be guest-blogging about this new book of his: 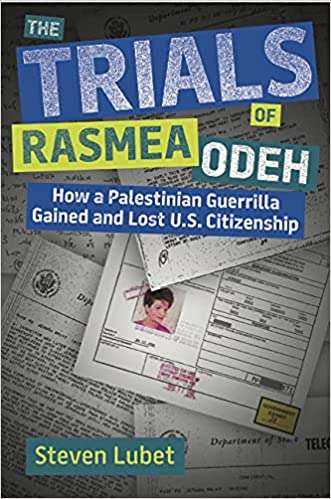 On February 21, 1969, a bomb exploded in the largest supermarket in Jerusalem. The blast killed two and injured many more, triggering an intense search for the terrorists behind the plot. Israeli security forces quickly apprehended, tortured, tried, and eventually convicted twenty-one-year-old Palestinian Rasmea Odeh for murder. Twenty-five years later, however, Odeh was not serving a life sentence in an Israeli prison but instead starting a new life in the United States, first in Detroit and later in Chicago, eventually becoming a naturalized citizen and working as a community organizer. Her arrest by U.S. federal authorities in 2013 on charges of unlawful procurement of citizenship and subsequent trial ignited defenders and detractors, even as the facts of the case, the previous conviction, and those of Odeh's life were obscured or ignored.

Based on extensive research, The Trials of Rasmea Odeh separates fact from fiction as it follows the remarkable twists of this story, even―or especially―where those facts subvert one political narrative or another. The result is that rare book that is both an extraordinary achievement of scholarly research and a gripping, accessible, and engaging narrative, making it an invaluable resource for discussion of the issues of citizenship, statehood, and the limits of legality this story engages.

"What an exemplary gem of scholarship. Combining thorough inquiry with critical empathy, Lubet has written a superb classic that young scholars whatever their field will benefit from reading. The Trials of Rasmea Odeh is truly one of the most impressive books I've ever read."―David J. Garrow, Pulitzer Prize–winning author of Bearing the Cross: Martin Luther King, Jr., and the Southern Christian Leadership Conference and Rising Star: The Making of Barack Obama

"Professor Lubet takes no shortcuts with this book, unflinchingly examining the record of Odeh's life … Professor Lubet is able to explain the underlying law and legal strategy in a way that is clear and comprehensible without losing any technical nuance. He brings the courtroom alive to the reader, showing how both political and legal strategies influenced how the case was litigated. [It] is beautifully written and will be of interest to a wide audience. "―Cassandra Burke Robertson, John Deaver Drinko – BakerHostetler Professor of Law and Director, Center for Professional Ethics, Case Western Reserve University School of Law

"The Trials of Rasmea Odeh weaves together an intricate historical and legal account of Middle Eastern conflict and U.S. denaturalization. Rasmea Odeh's story, told with nuance and in crisp prose, grips the reader every bit as much as a fictional thriller would. A highly informative and fascinating book of great value to scholars and general readers alike. "―Irina Manta, professor at Maurice A. Deane School of Law at Hofstra University

I much look forward to Prof. Lubet's posts!