I learned from Mark Walsh's column at SCOTUSBlog that Art Lien, the veteran Supreme Court artist, will retire at the end of this term.

[Art Lien] is entering his last few months of arguments before himself retiring at the end of the term. He first started sketching Supreme Court arguments in the 1977-78 term, when Regents of the University of California v.  Bakke, an affirmative-action case, was decided. I would like to prevail on him to go one more term and have some symmetry by sketching the Harvard and University of North Carolina affirmative-action cases, but it seems that his mind is made up. And unlike Breyer, Lien has not conditioned his retirement date on the confirmation of a successor.

Art provides such a valuable function. Even with the audio live-streamed, we still have no visuals from inside the chamber. How else will we know if the Justices are wearing masks? And today, for reasons unknown, there was a fire extinguisher to the left of the bench. Why? Who knows. But Art drew it. 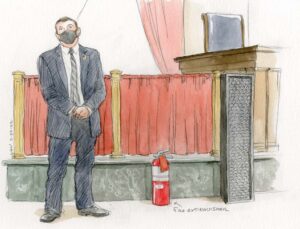 Mark Walsh had a comment that was just *fire emoji* (Reason.com blocks the inclusion of emoji in posts).

As we wait for the session to begin, the always astute Art Lien notices an object in the courtroom that is not usually there, at least not in so prominent a position. A fire extinguisher is resting on the floor just below and to the left of the bench. Perhaps the court has concluded that certain podcasters are in need of more fodder for their metaphors about the status of the court. Lien has, of course, quickly drawn a sketch of the fire extinguisher

We will miss you, Art.