I much enjoyed Jacob Mchangama's podcast on the history of free speech (Clear and Present Danger), so I'm particularly pleased to see his book is now out: 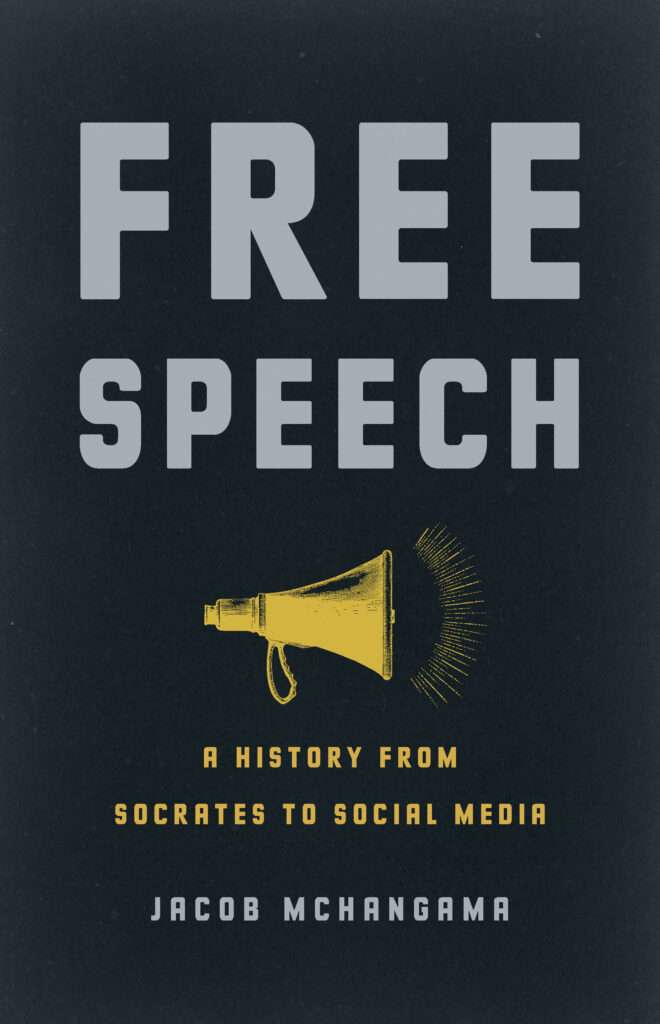 I asked him if he could pass along a guest post related to the book, and he graciously agreed:

According to Columbia University president and free speech scholar Lee Bollinger, the United States has become "the most speech protective of any nation on Earth, now or throughout history." Key to this development has been the Supreme Court´s gradual elevation of free speech to "a bedrock principle," barring the government from "prohibit[ing] the expression of an idea simply because society finds the idea offensive or disagreeable."

Most Americans seemingly approve of US free speech exceptionalism. According to a 2022 Knight Institute poll 63% of Americans find free speech "Extremely Important" while 28% find it "Very Important." But when the abstract ideal of free speech is put to the test against concrete and (supposedly) conflicting values, partisan cracks appear in the façade of American tolerance. 73% of Democrats find that kneeling or turning away during the national anthem is a legitimate expression of First Amendment rights, compared to a mere 35% of Republicans. Conversely, 57% of Republicans consider disseminating online misinformation about the 2020 Presidential election as consistent with the First Amendment, whereas Democrats´ tolerance drops to 20%. There are also significant partisan gaps when it comes to tolerance of Covid misinformation and protests against racial injustice. This selective and unprincipled defense of free speech—which I term "Milton´s Curse"—is nothing new, but has in fact been a recurrent theme throughout the history of free speech.

It might seem surprising and disrespectful to name a phenomenon that undermines free speech after the English poet John Milton, who in 1644 defied English censorship and published Areopagitica, his famous plea for press freedom. There is indeed much to admire in Areopagitica, and few writers have rivalled the eloquence of its prose. Milton's central argument was that censorship led to "the discouragement of all learning, and the stop of truth, not only by disexercising and blunting our abilities, in what we know already, but by hindering and cropping the discovery that might be yet further made, both in religious and civil wisdom." In a memorable passage that has lost none of its potency over the centuries, he declared, "Give me the liberty to know, to utter and to argue freely according to conscience, above all liberties."

However, on closer inspection Milton's defense of free speech came with rather significant ifs and buts. In fact, Milton stressed that, with press freedom, "I mean not tolerated popery, and open superstition, which as it extirpates all religions and civil supremacies, so itself should be extirpate." Nor did Milton wish to provide shelter to ideas that were "impious or evil … against faith or manners." If "mischievous and libellous" books were printed nonetheless, Milton's remedy was "the fire and the executioner" (i.e., book burnings). His chief goal was to facilitate the open discussion of "those neighbouring differences, or rather indifferences" that saw various Reformed Protestant sects at each other's throats, not free and equal speech for all. Milton also praised the enactment of a sweeping law from 1650 against "Atheistical, Blasphemous and Execrable Opinions." Eventually Milton even joined the corps of censors under the military dictatorship of Richard Cromwell. That Milton—the scourge of censors—would become a licensor himself (if apparently a lenient one) is indeed one of the great ironies of the history of free speech, though Milton is hardly alone when it comes double standards on censorship.

Still perhaps the subsequent history of free speech would have been less bumpy if the far more radical free speech ideals of the Levellers had become as prominent as those of Milton. They were a loose group of people in favor of universal tolerance, press freedom, equality before the law, and representative government. The most prominent Levellers were Richard Overton, William Walwyn, and John Lilburne. Between them, they published almost 250 pamphlets from 1645 to 1649—many of which were written from prison when their ideals and notions about liberty of conscience became too radical to tolerate. The Levellers used the language of individual and natural rights, with Lilburne often appealing to the rights of "free-born Englishmen."

A few months before Milton's Areopagitica was published, William Walwyn complained that Parliament and ministers

stop all mens mouthes from speaking, and prohibit the Printing of any thing that might be produced in way of defence and vindication; and if any thing bee attempted, spoken or published without authority or licence, Pursuivants, fines and imprisonments, are sure to wait the Authors, Printers and publishers.

In 1646 Overton demanded that the government "let the imprisoned Presses at liberty, that all mens understandings may be more conveniently informed." Precisely where the Levellers drew the red line when it came to free speech and tolerance is difficult to say. They were neither of one mind nor entirely consistent, though at times they appeared to be almost free speech absolutists. Facing severe attack in 1649, the Levellers complained that censorship had "ever ushered in a tyranny; men's mouth being to be kept from making noise, whilst they are robbed of their liberties." And so, even "the least restraint upon the press" must be removed, since the people cannot enjoy liberty if stopped from "speaking, writing, printing, and publishing their minds freely." The Levellers also used the very modern argument that more speech was the best weapon against bad speech, and explicitly arguing for the importance of being principled and defending the freedoms of both friend and foe, lest the temptation to use the law selectively end up "overwhelming your own liberties." Alas, even the Levellers were not 100% consistent. In 1649—with their lives and liberties under severe threat—the Levellers adopted a more pragmatic stance and opened the door for excluding Catholics refusing to reject Papal supremacy from holding public office. Lilburne even pressed for stricter licensing of royalist books that might contribute to "the ruine of the Kingdome."

Nonetheless, the Levellers were far ahead of their time (and of Milton) and as Professor Michael Kent Curtis has argued there are "echoes of Leveller doctrines in America." Arguably this includes Madison's draft of what would become the First Amendment which fused the idea that egalitarian free speech is necessary for a sovereign people to rule itself with the assertion that free speech is the guardian of all other individual liberties.

Still even America's founding generation was not immune to Milton's Curse, as proved by the adoption of the Sedition Act in 1798. In 1765 John Adams had attacked the Stamp Act as a British design to "strip us in a great measure of the means of knowledge, by loading the Press…with restraints and duties." Yet he found the Sedition Act "warranted by the Constitution," signed it into law, and used his powers to authorize several prosecutions of his critics, including newspaper editors. But it was not only the Sedition Act's Federalist supporters who were willing to compromise free speech for political gain.

Thomas Jefferson had been a fierce critic of the Sedition Act and after winning the 1800 Presidential Election, he struck a unifying and bipartisan note in his first inaugural address:

We are all republicans: we are all federalists. If there be any among us who would wish to dissolve this Union, or to change its republican form, let them stand undisturbed as monuments of the safety with which error of opinion may be tolerated, where reason is left free to combat it.

However, like Adams before him, President Jefferson quickly found himself the target of newspaper smear campaigns. In a private letter he complained that Federalist newspapers undermined press freedom "by pushing it's licentiousness and it's lying to such a degree of prostitution as to deprive it of all credit" and argued that a "few prosecutions of the most eminent offenders would have a wholesome effect in restoring the integrity of the presses."

The fact that not even Jefferson was immune to Milton's Curse is a good reminder to think twice whenever we have convinced ourselves that in this specific instance, restrictions are necessary to limit hate speech, online misinformation, educational indoctrination or the myriad other reasons we might invoke to justify our all too human tendency towards intolerance.

Mchangama, by the way, is also the coauthor of an article that we recently accepted at the Journal of Free Speech Law (through blind peer review); that should be out within several weeks.