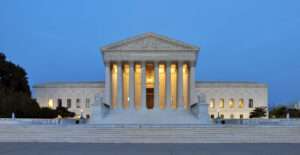 Today the Supreme Court rejected former President Donald Trump's request to issue an injunction blocking release of presidential documents to Congress, related to the January 6, 2021 attack on the Capitol and Trump's own role in inspiring it. The documents have been demanded by the congressional select committee investigating the attack; the Biden administration supported the congressional committee's demands. The Supreme Court's ruling on this point essentially affirms an earlier DC Circuit decision against Trump, and clears the way for release of the documents.

However, the per curiam majority opinion leaves open the issue of whether former presidents might be able to use executive privilege to block release of documents  demanded by Congress in at least some future cases:

Justice Clarence Thomas indicated he would have ruled in favor of Trump in this case, though without writing an opinion explaining why.

In a concurring statement, Justice Brett Kavanaugh wrote that, while Trump should not be permitted to block the release of these particular documents, former presidents should be allowed to do so in at least some situations:

If Presidents and their advisers thought that the privilege's protections would terminate at the end of the Presidency and that their privileged communications could be disclosed when the President left office (or were subject to the absolute control of a subsequent President who could be a political opponent of a former President), the consequences for the Presidency would be severe. Without sufficient assurances of continuing confidentiality, Presidents and their advisers would be chilled from engaging in the full and frank deliberations upon which effective discharge of the President's duties depends.

I think Kavanaugh is wrong about this. If it exists at all (some scholars argue it does not), executive privilege is a power of the office of the presidency, and can only be wielded by the person who occupies the office at the time in question. Once he leaves office, he loses all the power and privileges associated with it, except perhaps those specifically extended by laws enacted by Congress (e.g. – pension rights and continuing security provided by the Secret Service). As the Court of Appeals opinion in this case explains, "the privilege, like all other Article II powers, resides with the sitting President."

No one claims that a former president can continue to issue executive orders, receive ambassadors, or act as commander-in-chief of the armed forces. He cannot keep on wielding any of those powers, even if he feels he needs to do so to prevent a successor from embarrassing him. The same logic applies to executive privilege. These are all powers of the office that expire as soon as the president's term in office at ends. At that point, he has no more executive authority than any other private citizen.

It's true, as Kavanaugh and others have pointed out, that this approach allows current presidents to release predecessors' documents in ways that might embarrass the latter. Fear of such an eventuality might indeed inhibit current presidents' deliberations with their advisers. But there are many things incumbent presidents can do that might embarrass predecessors, including reversing the latter's policies in ways that make them look bad, blaming them for various problems, and so on. The possibility that such things might happen can potentially inhibit presidents from adopting various policies, as well as inhibit advisers from recommending a given course of action.

But the Constitution does not give former presidents any general power to block successors' actions that might embarrass them. And, while fear of future embarrassment might sometimes inhibit good policies, it also can prevent bad ones. If future revelation of your activities in office might prove embarrassing, that may be because you're doing something wrong!

Regardless, the Constitution does not grant executive privilege – or any other official power – to former presidents. Absent specific laws to the contrary, they should be treated as private citizens, on par with everyone else.

In sum, the Court got this case right. They and the DC Circuit are, I think, correct to conclude that this particular claim of executive privilege should have been rejected even if asserted by an incumbent president. But the issue of when and whether a former president can block release of documents demanded by Congress (with the approval of the incumbent president) in other cases may well come back to the Court in the future.