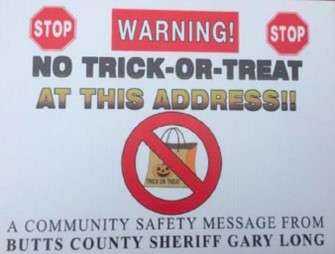 From McClendon v. Long, decided today by the Eleventh Circuit, in an opinion by Judge Frank Hull, joined by Chief Judge William Pryor and Britt Grant:

In October 2018, two deputies from the Butts County Sheriff's Office placed signs in the front yards of the residences of all 57 registered sex offenders within the County, warning "STOP" and "NO TRICK-OR-TREAT AT THIS ADDRESS." Before Halloween 2019, three registered sex offenders living in Butts County sued, seeking to enjoin the Sheriff from placing the signs again. The district court denied a permanent injunction and granted summary judgment in favor of the Sheriff…. [W]e conclude that the Sheriff's warning signs are compelled government speech, and their placement violates a homeowner's First Amendment rights. Thus, we vacate the district court's judgment in favor of the Sheriff and remand for further proceedings consistent with this opinion….

The Sheriff's Office placed these warning signs in front of the listed homes of all registered sex offenders in Butts County, without considering whether the State had classified any of them as posing an increased risk of recidivism. The deputies collected the signs on November 1…. 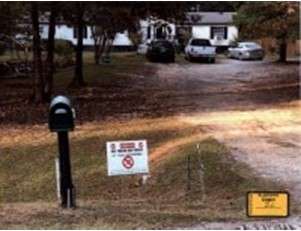 In Wooley, the Supreme Court held that it was unconstitutional for the State of New Hampshire to prosecute a citizen for covering the State motto, "Live Free or Die," on his license plate. Specifically, the Court held that a state could not "constitutionally require an individual to participate in the dissemination of an ideological message by displaying it on his private property in a manner and for the express purpose that it be observed and read by the public." The Court stated that the New Hampshire statute "in effect requires that appellees use their private property as a 'mobile billboard' for the State's ideological message or suffer a penalty."

This case is materially similar to Wooley…. [T]he Sheriff required the use of private property as a stationary billboard for his own ideological message, "for the express purpose that it be observed and read by the public." …

In concluding otherwise, the district court erred in two ways. First, it determined that a compelled government speech claim requires a finding that a reasonable third party would view the speech as "endorsed" by the plaintiff. Wooley contains no such requirement….

Second, the district court erred by determining that the plaintiffs' ability to place their own yard signs disagreeing with the warning signs could cure the original violation. This ignores that the harm here is the forced display of a government message on private property in violation of the "right to refrain from speaking at all," not the "forced appearance of endorsement" of that message. Indeed, yard signs at "one's own residence" are a "distinct and traditionally important medium of expression." Residents, then, should be able to decide whether to use that traditional medium for speech in the first instance. [Note also that precisely the same argument as the district court's was made by the dissent in Wooley, but didn't carry the day. -EV] …

When the government "compel[s] speakers to utter or distribute speech bearing a particular message," as the Sheriff does here, such a policy imposes a content-based burden on speech and is subject to strict-scrutiny review…. Thus, to be valid under the First Amendment, the placement of the warning signs must be a narrowly tailored means of serving a compelling state interest….

[T]he Sheriff's interest in protecting children from sexual abuse is compelling. However, the yard signs are not narrowly tailored to achieve that goal.

In 2018, the Sheriff's deputies placed the signs in the yards of all 57 registered sex offenders in Butts County. Prior to placing the signs, the Sheriff did not consider whether any of the registrants were classified by Georgia as likely to recidivate. He even admitted that, since he took office in 2013, he had never had an issue with a registrant having unauthorized contact or reoffending with a minor on Halloween or at any other time. The Sheriff has not provided any record evidence that the registrants in Butts County actually pose a danger to trick-or-treating children or that these signs would serve to prevent such danger. And the Sheriff bears the burden of proof on the issue of whether his signs are narrowly tailored.

Assuming that yard signs alerting people to the residences of registered sex offenders on Halloween would prevent the sexual abuse of children (which, we repeat, is not supported by any record evidence), the signs are not tailored narrowly enough. Sheriff Long testified that the sex-offender registry, which contains each registrant's name, address, and photograph, is available on the State of Georgia's website, on the Butts County website, at Butts County administrative buildings, and at the Butts County Superior Court Clerk's Office. The Sheriff has made the sex offender registry widely available through government sources, diminishing the need to require residents to disseminate the same information in yard signs on their private property. And, while "narrowly tailored" does not mean "perfectly tailored," the Sheriff has not met his burden to show the yard signs were narrowly tailored, because he has not offered evidence that any of the yard signs would accomplish the compelling purpose of protecting children from sexual abuse….

The court also rejected the sheriff's argument that the signs were placed on a publicly-owned easement (a right-of-way): "the Sheriff has not shown that a government entity—much less the Sheriff—owns a right-of-way in fee across the front yards where the plaintiffs reside."

I think this is quite correct, given Wooley v. Maynard. Congratulations to lawyer Mark Yurachek on the victory.