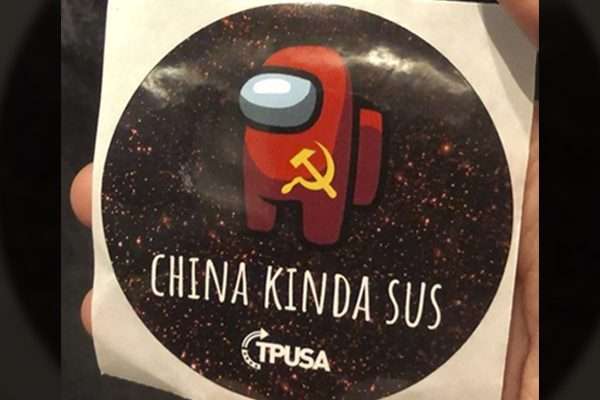 The Foundation for Individual Rights in Education (FIRE) has the details:

Emerson College suspended a campus chapter of conservative student group Turning Point USA on Oct. 1 after members passed out stickers critical of China's government. Today, the Foundation for Individual Rights in Education is demanding the private institution drop its investigation against the students and reaffirm its promises of free expression.

On Sept. 29, several TPUSA members passed out stickers featuring a hammer and sickle with the caption "CHINA KINDA SUS" — slang for "suspicious."

The next day, Emerson's International Student Affairs team sent out a statement to the college's international students decrying the "stickers that expressed anti-China hate." Emerson Interim President William Gilligan sent a separate email to the student body in which he promised that "the College will initiate an investigation."

Under pressure from other student groups who accused TPUSA of anti-Asian bias and xenophobia, including the Emerson Chinese Student Association, the college launched an investigation into the group. In an Instagram video, the TPUSA chapter said the stickers are critical of the Chinese government, not the Chinese people.

On Oct. 1, the TPUSA chapter's leaders received a letter from Julie Rothhaar-Sanders, Emerson's director of community standards, stating that the college had launched a formal investigation of TPUSA under Emerson's Bias-Related Behavior and Invasion of Privacy policies. While the investigation is active, TPUSA faces "interim action," meaning the group is barred from normal activities, such as hosting events or reserving campus space for meetings.

"If anything is 'kinda sus,' it's Emerson's overblown response to the stickers," said FIRE attorney Adam Steinbaugh, who wrote today's letter to Emerson. "This investigation will cause students and faculty to suspect that their rights mean nothing to the college. Emerson must make this right by immediately dropping the investigation and affirming that criticism of a foreign government is not discriminatory harassment."

FIRE's letter reminds the college — whose motto is "Expression Necessary to Evolution" — that "freedom of expression entails the right to criticize not only our own governments, but those of foreign nations, even when that criticism is offensive."

While Emerson is a private institution not bound by the First Amendment, it must honor its Statement on Freedom of Expression, which touts "the high importance" of the First Amendment on campus and "encourages students to present ideas, express their individuality and culture, and be open to thoughts or life styles [sic] that differ from their own."

As FIRE's letter explains, this sticker was critical of China's government, not its people, but would be protected even if it had been [critical of Chinese people generally]:

The stickers do not invoke or traffic in stereotypes associated with people of Chinese descent or origin. Instead, the stickers are speech critical of China's government. The stickers utilize the familiar emblem of the sole governing party of the country, superimposed over a video game character bearing the same red color of China's flag. The sticker's text ("China kinda sus") refers to the name of the country, not its people. Criticism of a foreign government is not inherently criticism of the people it purports to represent, even if people who hail from, descend from, or support that particular nation find that criticism personally offensive.

[E]ven assuming the stickers' message was capable of being construed as speech based on race, ethnicity, or national origin, it does not rise to the level of peer-on-peer harassment as properly defined under the law.

This isn't the first time a student has come under fire because of speech criticizing China's government. Fordham University student Austin Tong sued his college after he was banned from campus and placed on probation for a June 2020 Instagram post memorializing the Tiananmen Square massacre. Similarly, University of San Diego School of Law professor Tom Smith was investigated for criticizing the Chinese government in a personal blog post in March. Almost two months and multiple letters from FIRE later, USD ended the investigation, deeming that Smith's post was protected speech.

For more on attempts to suppress criticism of foreign countries, see my post from 2018, Department of Education Decision May Pressure Universities to Restrict Some Anti-Israel Speech.