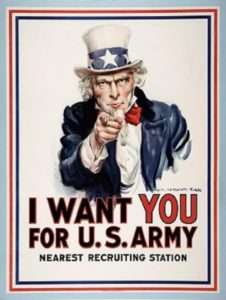 It attracted relatively little attention, because of all the other political issues in the news. But, a few days ago, the House of Representatives voted to expand mandatory "Selective Service" draft registration to include women. The system currently applies only to men aged 18-25. The National Defense Authorization Act (NDAA) that passed the House last week would apply the system to women of the same age. Since the Senate version of the NDAA includes a similar provision, it is highly likely that women will soon be subject to mandatory draft registration, on par with men.

The move is likely, at least in part, a reaction to recent indications that the Supreme Court is likely to strike down the present system on the ground that it engages in unconstitutional sex discrimination. In June, the Supreme Court refused to hear a case challenging the male-only system. But three justices, including conservative Brett Kavanaugh, filed an opinion arguing that the system is unconstitutional, and suggesting that the Court should invalidate it in the near future, if Congress does not act.

If Congress expands the system to include women, it would indeed put an end to the problem of unconstitutional sex discrimination in draft registration. But it would do so at the cost of subjecting both men and women to potential forced labor. In testimony before the National Commission on Military, National, and Public Service (whose report was cited by the justices) and elsewhere, I explained why such a policy is deeply unjust, and the better way to end sex discrimination is simply to abolish draft registration for everyone. By that means, we can simultaneously promote liberty and gender equality, instead of sacrificing one to the other.

It so happens I have both a son and a daughter. Both should be free of sex discrimination. But I also don't want either of them to be subjected to forced labor by the state.

For the foreseeable future, the expansion of the draft registration system might make little difference. There is no military draft, and no politically significant movement to reinstate it. But when and if such a movement reemerges (as it has several times in earlier American history), the existence of the draft registration system would make it easier to implement its agenda.

In addition, the same registration system that is currently meant only to serve as the basis for a potential military draft, could easily be repurposed to impose a system of civilian forced labor, as urged by some advocates of mandatory "national service," such as 2020 Democratic presidential contender John Delaney. Right now, this idea probably has even less support than reimposition of the military draft. But, it too, could potentially gain popularity, as has  happened in France, which recently introduced mandatory national service, scheduled to begin in 2026. The National Commission on Military, National, and Public Service, whose recommendations on draft registration influenced both Congress and the Supreme Court justices, included people sympathetic to the idea, though its final report stopped short of it.

As I explained more fully in my testimony to the Commission, a nationwide system of forced labor isn't just another debatable policy option, or one of many potential infringements of liberty. It would be a massive assault on the basic principles of a free society. Instead of expanding a draft registration system that might facilitate such a grave injustice, Congress should abolish it root and branch, for men and women alike. We should strive for equal liberty regardless of sex, not equal potential subjection to forced labor.