In recent years, the number of amicus briefs submitted to the Supreme Court, as well as to the lower courts, has increased. Generally, at the beginning of every brief is a "Statement of Interest," which explains why the brief was filed. The statement of interest tends to convey two broad ideas. First, the brief purports to introduce some argument that is different than the arguments presented by the parties. An amicus brief that merely repeats what the parties argued is not very helpful. Second, the brief is signed by people who bring novel perspectives to the case. For example, they have relevant experience or expertise.

We can graph these two related concepts on an x-y axis.

Second, the x-axis plots the identity of the signatories. There are many ways to measure this characteristic. To mirror the y-axis, I consider whether those who signed the brief are expected, or unexpected. Expected signatories are those people who are expected to support a specific result. At the other end of the spectrum are unexpected signatories. These are people you would not expect to support a particular side. 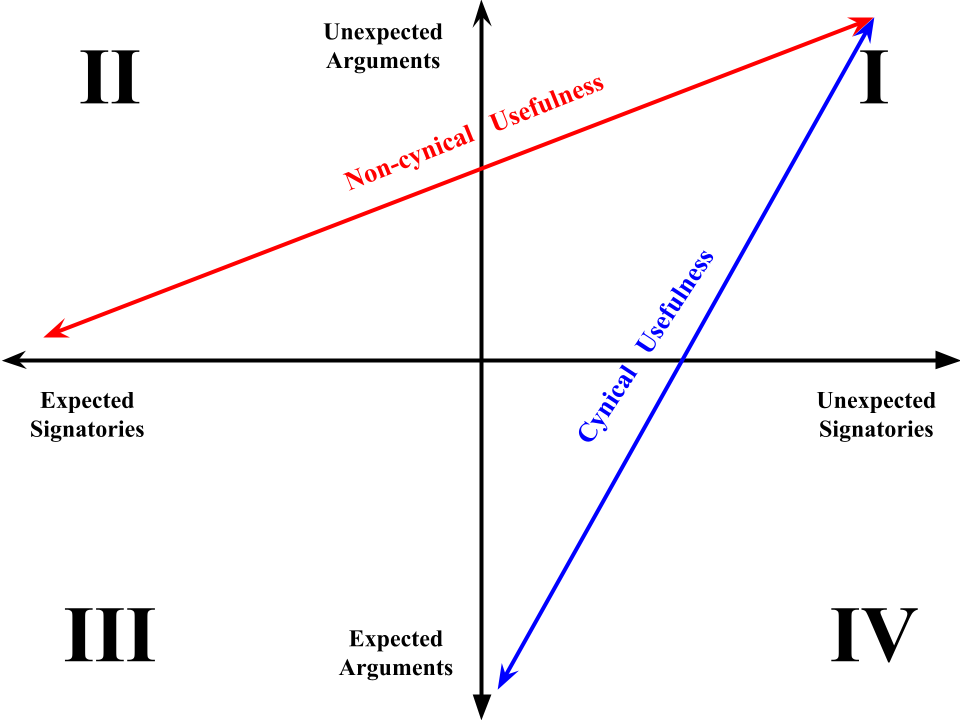 One way to assess the usefulness of an amicus brief is to measure whether the arguments advanced are expected or unexpected. Briefs at one end of the spectrum simply parrot the sorts of arguments advanced by the parties. Perhaps amici provide a new spin on these arguments, but there is not much new. These briefs are not particularly helpful. Briefs on the other end of the spectrum make novel contributions. For example, scholars who write in a niche area of the law introduce some new argument that was not developed in the litigation. These briefs may be filed in support of neither part. Or, the brief offers an innovative way to read or reconcile older precedents. Most lawyers would boast that their arguments are unexpected. I'm doubtful. To be candid, most amicus briefs do not tread new ground–present company included. Usually, by the time a case gets to the Supreme Court, the issues have been fully and thoroughly vetted. These sorts of cases are won and lost based on well-honed briefing by the parties. From time to time, these unexpected briefs are written. But they are rare.

More often than not, the signatories on a brief are entirely expected. Scan through the docket on any Supreme Court case. If you look at the party who submitted the brief, you can guess–with a high degree of accuracy–what the brief says. For example, in a case where the plaintiffs challenged a gun control law, there is no surprise if a gun-rights group supports the plaintiffs. Or, in a case where the plaintiffs challenge an abortion law, there is no surprise if an abortion-rights group supports the plaintiffs. These ideologically-sympathetic briefs are predictable. Briefs with expected signatories can still advance unexpected arguments. That metric is plotted on the y-axis. But any such novelty must be assessed against–and even discounted by–the philosophical simpatico between the group and the supported litigant. Expected signatories are not neutral arbiters. They have a vested interest in the outcome of the case.

First, there is the strange-bedfellows brief. Here, people on opposite sides of the ideological spectrum, who tend to see things differently, reach a common consensus on a specific legal issue. These briefs signal that a given case need not be resolved on a strict ideological divide. Often, the Cato Institute and the Constitutional Accountability Center join forces for these sorts of briefs. In McDonald v. Chicago, a cohort of right-of-center and left-of-center scholars filed a joint brief to reinvigorate the Privileges or Immunities Clause. These briefs signal that there is broad support for a position.

Second, there is the against-interest brief. Here, people who previously took some position on an issue, now take a position that is against their prior interest. To use a familiar example, my colleagues Jonathan Adler and Ilya Somin filed amicus briefs in the ACA litigation. Both scholars were involved in other Obamacare challenges and did not support the law as a policy matter. But in California v. Texas, they argued that the courts should not rule against the ACA based on severability doctrine. I think these briefs were especially effective because these signatories were unexpected: their current positions stood in principled tension with their prior positions.

Third, there is the former-government-official brief. Here, the signatories previously served in government, and they argue that current administration is doing something different than they did. These types of submissions are especially effective where government officials who served in both Republican and Democratic administrations agree. These briefs were very prominent during the Trump Administration. For example, in Department of Commerce v. New York, former directors of the Census Bureau filed a brief. They argued that inquiring about citizenship status would yield a lower response rate. Chief Justice Robert favorably cited this brief to show that the Trump Administration failed to justify its policy.

Measuring the Usefulness of Amicus Briefs

Type I briefs are the most useful briefs: unexpected arguments are advanced by unexpected signatories. These positions are treated as more reliable because the signatories bucked conventional wisdom. Perhaps they aligned with cross-ideological groups. This sort of brief would minimize differences and find common ground. Or former government officials repudiated their successors–always a fraught task. Or, in some cases, a brief is filed in support of neither party.  In any event, the Type I brief is the gold standard. Very few briefs fit within this taxonomy.

Type II briefs are the second-most useful briefs. They advance novel arguments that may facilitate deliberations. But there may be reason to doubt the objectivity of the brief because of the identity of the signatories. To use my prior examples, briefs from abortion rights groups who file a brief in an abortion case are not neutral. Ditto for gun rights groups who file a brief in a gun rights case. These groups have a vested stake in a particular outcome. They may be less friends of the Court and more friends of the cause. For Type II briefs to be useful, their novelty must exceed the novelty of a Type I brief. On the plot, I have drawn a "Non-cynical Usefulness" line in red. It illustrates how briefs can be cited in a non-cynical fashion. This line favors unexpected arguments, and gives a preference to those unexpected arguments advanced by unexpected signatories.

I also plotted a "Cynical Usefulness" line in blue, which stretches between Type III briefs to Type I briefs. Why is this line dubbed cynical? Here, the focus is less on the novelty of the arguments, and more on the identity of the signatories. For example, imagine that an unexpected group of signatories puts forward a mediocre brief. The only valuable aspect of the brief is that a cross-ideological group of people agreed on an issue; or that former government officials were willing to criticize the incumbent administration; or people who were thought to favor some policy filed a brief against that interest. With these submissions everything between the statement of interest and the signature block is window dressing. This brief is quite literally judged by its cover. Still, these briefs can be cited in a cynical fashion–not to develop reasoning, but to make an ideological point. I think these missives are especially useful in dissents: see, even people who usually agree with the majority reject the majority's argument! Tu quoque!  Of course, the cynical line stretches to Type I briefs. Where useful amici make useful arguments, there is a plus. But that benefit is not necessary.

Finally, Type III briefs are the least useful: the usual suspects round up the usual arguments. These sorts of briefs are not designed to change hearts or minds. At best, they may be useful tools for fundraising or virtue signaling.

This taxonomy is not a substitute for studies on citation patterns. In many cases, briefs from expected signatories are far more useful than briefs from unexpected signatories. The ACLU, Cato, CAC, and other groups are frequent players, but routinely submit high quality briefs with novel arguments that aid the deliberations. And I suspect that ideologically-sympathetic Justices favor briefs from certain groups over others. Rather, this taxonomy is designed to asses how the arguments presented in statements of interest affect–in an abstract sense–the utility of a brief.