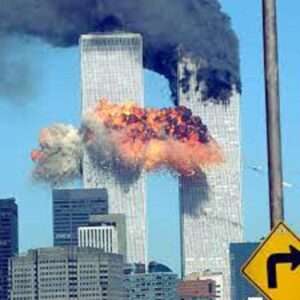 Today is the twentieth anniversary of 9/11, and many are recounting their memories of that day. In this post, I describe some of mine. But I warn in advance that my story is nowhere near as dramatic as many others. I was too far from Ground Zero for things to be any other way.

On the day of 9/11, I was clerking for a federal judge in Houston, Texas. I first heard about the attacks listening to the radio on my way to work that morning. The dial was tuned to a "top 40" station that almost never had any news. So when they interrupted the usual programming to say that a plane had crashed into the World Trade Center, I assumed it must be some sort of hoax. I had read about the 1938 "War of the Worlds" radio program scare (some listeners were convinced there was an actual alien invasion). I thought this might be the same sort of thing.

When I got to the office and turned on my computer, I could not load the CNN website; too many other people were trying to access it. That's when I knew the attack was real.

Business in our judge's chambers went on more or less normally for most of the day. But I did call some people I knew in the New York area to see about their safety. The longest of these conversations was with the brother of a Muslim friend who worked near the Twin Towers. By the time we spoke (it was late morning), we already knew the attack was likely the work of radical Islamist terrorists. We discussed the implications for US foreign policy, and also the possibility of an upsurge of anti-Muslim bigotry at home. We both thought there would be a strong military response, and also both were in favor of the idea; I still think it was necessary, though many in retrospect disagree.

With respect to the other issue, I said historical precedent (I had in mind things like the persecution of Japanese-Americans after Pearl Harbor), suggested such a backlash could well happen. But I also thought there would be more resistance to it than in earlier eras.

To an extent, I turned out to be right; but only to an extent. The initial upsurge of hate crime incidents subsided after a few months, though still above pre-9/11 levels. Bad as it was, it was still fairly modest, by historical standards. To their credit, both George W. Bush and (later) Barack Obama condemned anti-Muslim bigotry, and did what they could to forestall it. The War on Terror did lead to some racial/religious profiling and other civil liberties violations. But nowhere near the scale of what happened during World War I and World War II. On the other hand, the conflict helped spur the rise of a new and dangerous nativist movement on the right, lowlighted by Trump and his anti-Muslim travel bans. I did not foresee that would happen to anything like the extent that actually occurred.

A few weeks after 9/11, I saw my first instance of post-9/11 "security theater," while getting on a plane along with a group of other federal court personnel, on our way to a court sitting. One of the people in the group was a federal court of appeals judge (not the one I clerked for). The security people insisted on confiscating his fingernail clippers.

The judge, who was about 70 years old, pointed out he was a federal judge (showing the guard his judicial ID), and that there was no way he could possibly hijack a plane with those tiny clippers, even if he wanted to. It is indeed true that even the most ferocious terrorist would be hard-pressed to take over a plane with such a "weapon." But the security people insisted they had to enforce the rules, no matter how absurd. That small bit of mindlessness was a harbinger of things to come, including during the Covid crisis, which has led to far more severe violations of liberty than the War on Terror.

Despite these events, 9/11 had much less impact on my life than might have been expected. I knew two people who were killed that day, but both were very distant acquaintances. In 2005, I was scheduled to to go to Iraq to meet with members of the Commission drafting the new Iraqi Constitution to advise them on federalism issues. But my trip was scuttled at the last minute, because the Commission members went into lockdown due to the threat of terrorist attacks. The failure to institute an appropriate federal system was one of the main flaws of "nation-building" efforts in both Iraq and Afghanistan. I  foresaw that problem even back then (as did plenty of other, far more distinguished, federalism specialists). But I am under no illusion that my efforts would have made a meaningful difference, though I badly wanted to try to do so.

I know people who served in Iraq and Afghanistan, whose sacrifices put my own very small ones to shame. But their experiences impacted me only peripherally.

I will not go further into the moral and policy issues surrounding the conflict that began that day. There is plenty of blame to assign to all four presidents from that time to the present. At the moment, I am so angry at both Trump and Biden's handling of Afghanistan, that I am in no mood to discuss it, beyond what I have said already. Of course, many veterans and others who experienced the conflict far more directly than I did, are likely feeling much greater pain today.