This is an unusual case. On one side is a major public university that seeks to use our nation's trademark laws in novel ways in an effort to combat the COVID-19 pandemic. On the other side is a deeply unsympathetic John Doe defendant ("Doe") who posted a series of vulgarity-filled messages on Instagram in an attempt to persuade college students to attend maskless COVID-19 parties during the peak of the first wave of the pandemic, whose answer was stricken for litigation misconduct, who stopped participating in this action after his answer was stricken, and whose identify was never discovered during subsequent proceedings. All of this has culminated in the plaintiff, the Arizona Board of Regents ("ABOR"), filing a motion for default judgment that seeks the entry of a permanent injunction against Doe.

As discussed below, although ABOR's motivations for bringing this lawsuit are understandable, ABOR has not established that Doe's challenged conduct (however odious it may be) implicates the trademark doctrines identified in ABOR's complaint. Accordingly, ABOR's motion is denied and this action is dismissed….

"'COVID-19 Parties because they're during this pandemic era' Not a contest to catch COVID. THROWING HUGE PARTIES AT ASU. Follow before we go private."

Also on July 19, 2020, Doe posted the first message on the "asu_covid.parties" account. It provided as follows: 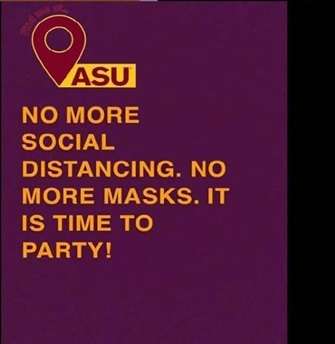 As the complaint notes, this post included "the ASU logo within the body of the message" and was formatted "in ASU's maroon and gold color trade dress."

At some unspecified time after he created this post, Doe wrote a comment in the public comment bar that appears next to the post. The comment provided as follows: "Those of you coming back to Phoenix. We about to get fucking lit."

On July 20, 2020, Doe posted his second message on the "asu_covid.parties" account. Unlike the first message, this message was not formatted in maroon and gold (it was set against a black background, with neon pink and yellow text) and did not include the ASU logo. Its text provided as follows: "OUR FIRST PARTY WILL BE CALLED HOAX-19 BECAUSE THE IDEA THAT COVID IS ONLY RAMPANT IN AMERICA COMPARED TO OTHER COUNTRIES IS A HOAX! COME TO HOAX-19. POSTING ADDY SOON!"

Doe proceeded to post a series of additional messages on the "asu_covid.parties" account. Although the complaint only discusses some of those messages, more are provided in an attachment to the complaint. Notably, none of the later messages prominently featured the colors of maroon and gold and only one displayed the ASU logo. The text of each subsequent message is as follows:

[I've moved the remaining messages to the end of the post. -EV]

[T]hese claims require a showing of a likelihood of confusion (or some variant thereof). "The 'likelihood of confusion' inquiry," in turn, "generally considers whether a reasonably prudent consumer in the marketplace is likely to be confused as to the origin or source of the goods or services bearing one of the marks or names at issue in the case."

Here, a reasonably prudent consumer would not be deceived or confused into believing that ASU was the "source or origin" of the posts and messages emanating from the "asu_covid.parties" account. Only one of the 19 posts (the first post) featured both ASU's distinctive maroon and gold colors and ASU's logo. The post itself only contained the words "No more social distancing. No more masks. It is time to party!" However, the "surrounding context on the user's screen" is "important here." Anyone viewing this post online would immediately see the string of comments accompanying the post. The "asu_covid.parties" accountholder posted the first two comments in the thread, the second of which was: "Those of you coming back to Phoenix. We about to get fucking lit." Although it is not uncommon for universities to attempt to appeal to students by imitating their vernacular, no university would drop the f-bomb in an official party invitation. Also, the speaker ("we") plans "to get … lit," which, in context, clearly means "drunk." A reasonably prudent consumer would not have construed this as an invitation from ASU to come to an ASU-sponsored party.

Many of the subsequent messages from the "asu_covid.parties" account affirmatively criticized—often in profane and vulgar terms—ASU's leadership and official policies. For example, Message Six quoted from a newspaper article about ASU's opposition to COVID parties, then stated that "[t]hey"—which, in context, obviously means ASU—"are trying to slander this account," assured readers that "ASU will not be able to punish you" for attending a COVID party, and closed with the promise that "[w]e will not release the names of people who sign waivers to the University under any circumstance." No reasonably prudent consumer would have thought the origin or source of these statements was ASU. Other messages followed the same pattern….

Then there are the Nazi analogies. Message Fifteen compares ASU unfavorably to "the USSR, Nazi Germany, North Korea, China or Venezuela" and then refers to ASU's president, Michael Crow, as "Führer Crow." Similarly, Message Seventeen warns readers that "Führer Crow … wants to track you with an app even when you're off campus." And Message Eighteen again includes a reference to "Führer Crow," this time accompanied by a stream of vulgarities. Many things can be said about these offensive and outrageous statements, but it is not plausible (to put it mildly) that a reasonably prudent consumer would believe ASU was the source or origin of them….

ABOR's arguments to the contrary are unavailing…. [T]he sole instance of [actual] confusion cited by ABOR is a typo-laden Twitter post from an unidentified individual who claimed to be an ASU graduate. Although the post called out "#ASU," it's not clear from the haphazardly worded tweet whether this individual was actually confused (e.g., believed ASU was sponsoring COVID parties) or simply disgusted that ASU students were sponsoring COVID parties…. The threatened actions (revoking alumni membership and sending back an alumni plate) might have been motivated by a desire not to be associated with such students.

At any rate, even assuming that one out of the "nearly 500,000 Sun Devils worldwide" … believed that the profanity-laden posts coming from the "asu_covid.parties" account were actually coming from ASU, this would not establish a likelihood of confusion…. "[A] showing of actual confusion among significant numbers of consumers provides strong support for the likelihood of confusion." … Tellingly, the comments to the posts suggest that readers believed the "asu_covid.parties" account belonged to a student or group of students, not the university. (See, e.g., ["Since none of you learned critical thinking skills, drop out. [Y]ou don't deserve to be in college."]; ["They gon switch us to all online by September bc of you DUMB mfs."]; ["This is embarrassing. I haven't even started at ASU yet and you're telling me I'm gonna have to go to school with idiots like you? Bye."].)

In seeming anticipation of this conclusion, ABOR argues that "even if a consumer were to conclude, after reading one or more posts by 'asu_covid.parties' that the account may not be affiliated with ASU, there is nevertheless actionable initial interest confusion in the sense that 'asu_covid.parties' improperly benefits in the first instance by using the goodwill developed in the ASU Marks to drive consumers to its account." Although it is true that "initial interest confusion" may qualify as infringement "even though no actual sale is finally completed as a result of the confusion," that doctrine is factually inapplicable here. Admittedly, Doe's initial post on the "asu_covid.parties" account was written in maroon and gold and included a logo that potentially could be confused with ASU's logo, but as discussed above, the accompanying comment—"Those of you coming back to Phoenix. We about to get fucking lit."—was too crude and profane to create initial confusion as to its source and origin. More broadly, it cannot be the case that every social media post written by a college student that happens to use the school's colors and/or logo in the post, and identifies the school's location as the location of the poster, creates initial interest confusion and qualifies as an actionable trademark violation….

"[T]he injury from dilution usually occurs when consumers aren't confused about the source of a product." "Whereas trademark law targets 'interference with the source signaling function' of trademarks, dilution protects owners 'from an appropriation of or free riding on' the substantial investment that they have made in their marks." Put another way, "[d]ilution … does not require a showing of consumer confusion." As a result, the likelihood-of-confusion analysis set forth above is not controlling here.

Here are the remaining messages: