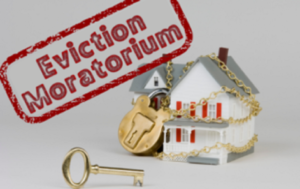 Earlier today, the Centers for Disease Control extended its nationwide eviction moratorium order until July 31 (it would otherwise have expired on June 30). The Washington Post reports that this is intended to be the final extension of a moratorium that was first instituted by the Trump administration, and then revived and extended under Biden:

The Biden administration on Thursday extended the nationwide ban on evictions for a month to help millions of tenants unable to make rent payments during the coronavirus pandemic, but said this is the last time it plans to do so.

Dr. Rochelle Walensky, director of the Centers for Disease Control and Prevention, extended the evictions moratorium from June 30 until July 31. The CDC said "this is intended to be the final extension of the moratorium."

A Biden administration official said the last month would be used for an "all hands on deck" multi-agency campaign to prevent a wave of evictions. One of the reasons the moratorium was put in place was to prevent further spread of COVID-19 by people put out on the streets and into shelters.

The legality of the CDC eviction moratorium has been challenged in court in multiple cases, and has so far been the subject of eight rulings by federal trial and appellate courts, five ruling against it and three in favor. I have written about these cases and the issues they raise in numerous previous posts, including here, here, and here. From the start, my view has been that the order is illegal, and that upholding it would set a very dangerous precedent. For what it's worth, I said that when the order was first enacted under Trump, and I have continued in the same vein since Biden revived it.

This new extension of the order ensures that the legal battle over the moratorium will continue. But perhaps not too much longer. If this really is the final extension, the litigation might end before many additional court decisions come out, and almost certainly before the issue gets to the Supreme Court. It's possible that the administration seeks exactly that outcome, because—if present trends continue (with most conservative judges voting to strike down the order and liberal ones to uphold it)—a trip to the Supremes might result in an embarrassing defeat for the administration and the CDC.

Meanwhile, the Supreme Court's recent ruling in Cedar Point Nursery v. Hassid opens up a new possible line of attack for plaintiffs challenging the legality of the moratorium. And this one could continue even after the moratorium ends.

Up until now, most cases challenging the order have not even raised the argument that it violates the Takings Clause of the Fifth Amendment. Those few who did raise it had no success.

A key reason why such claims faced bleak prospects is that Supreme Court precedent made it very difficult for property owners to prevail in a takings case if the government imposed a merely "temporary" physical occupation of their land. It was often difficult to tell the difference between a temporary occupation and a permanent one. But the CDC had a strong argument that the eviction moratorium was temporary, because each successive extension of the order included a specific time limit, generally only a few weeks in the future.

Cedar Point changes that. Now, at least a as a general rule, "a physical appropriation is a taking whether it is permanent or temporary." This makes potential takings challenges to the CDC order much stronger. A moratorium on evictions in situations where the property owner would otherwise have a right to remove the tenant pretty clearly imposes at least a temporary physical occupation against the owner's will. And the federal government isn't paying "just compensation" to affected landlords, as the Takings Clause requires.

Even after Cedar Point, the CDC can still make various arguments claiming there is no taking here. I will likely have more to say about that in future posts. But, at the very least, there is now a much stronger takings claim than before.

I expect more plaintiffs to raise this issue. And such takings claims might continue even after  the moratorium expires, because the plaintiffs can still seek compensation for the period during which eviction was delayed while the moratorium was in effect.

Whether they can actually get any substantial sum if they prevail is a different question. Courts could conclude the landlords suffered only very modest financial losses, and thus deny more than minimal compensation. Nonetheless, the takings issue here deserves close attention, and I hope to write about it further in the near future, especially if it becomes a bigger part of the legal battle over the eviction order.

NOTE: The plaintiffs in some of the lawsuits against the eviction moratorium are represented by the Pacific Legal Foundation, where my wife works (though she is not part of the litigation team handling the issue). I myself have played a minor (unpaid) role in advising PLF on this litigation.