On Wednesday, President Biden's Commission on the Supreme Court will hold its first public meeting. (I've registered to attend on Zoom). I am fairly certain Justice Breyer will not be invited to testify. His new book throws down the gauntlet to the Court Packers.

Adam Liptak has the details:

Justice Breyer has been particularly adamant that politics plays no role in judges' work, and he recently suggested that it should also not figure into their decisions about when to retire.

"My experience of more than 30 years as a judge has shown me that, once men and women take the judicial oath, they take the oath to heart," he said last month in a lecture at Harvard Law School. "They are loyal to the rule of law, not to the political party that helped to secure their appointment."

In the speech, a version of which will be published in September as a book called "The Authority of the Court and the Peril of Politics," Justice Breyer said that the odor of partisanship damages the judiciary.

"If the public sees judges as politicians in robes," he said, "its confidence in the courts, and in the rule of law itself, can only diminish, diminishing the court's power." 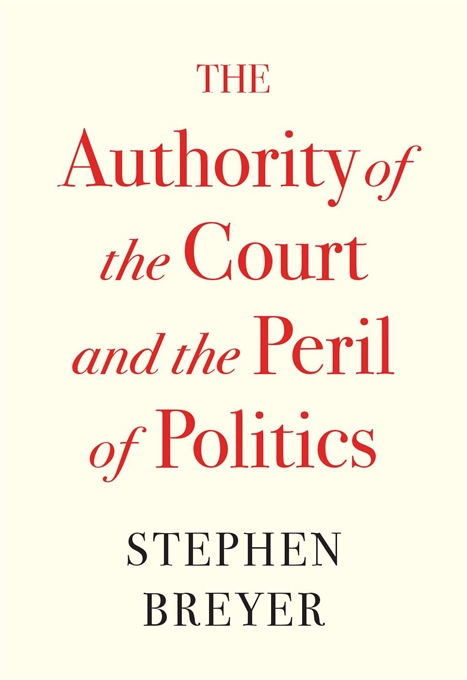 Here is the description of his new book:

A sitting justice reflects upon the authority of the Supreme Court—how that authority was gained and how measures to restructure the Court could undermine both the Court and the constitutional system of checks and balances that depends on it.

A growing chorus of officials and commentators argues that the Supreme Court has become too political. On this view the confirmation process is just an exercise in partisan agenda-setting, and the jurists are no more than "politicians in robes"—their ostensibly neutral judicial philosophies mere camouflage for conservative or liberal convictions. As a result of this perceived crisis, and for the first time since the New Deal era, there is serious talk of court packing in the name of ideological balance.

Justice Stephen Breyer sounds a cautionary note. Mindful of the Court's history, he suggests that the judiciary's hard-won authority would be marred by reforms premised on the assumption of ideological bias. Having, as Hamilton observed, "no influence over either the sword or the purse," the Court earned its authority by dispensing impartial justice and thereby accumulating public trust. If public trust is now in decline, the solution is to promote better understanding of how the judiciary actually works: overwhelmingly, judges adhere to their oath to avoid considerations of politics and popularity. The peril facing the Supreme Court comes less from partisan judges than from citizens who, encouraged by politicians, equate impartial justice with agreeable judicial outcomes.

Breyer warns that public trust would be eroded by political intervention, dashing the authority of the Court. Without the public's trust, the Court would no longer be able to act as a check on the other branches of government and a guarantor of the rule of law, threatening the foundations of our constitutional system.

You hear that Dean Chemerinsky? Judges should "adhere to their oath to avoid considerations of politics and popularity." You hear that Court Packers? There is only a "perceived crisis" to gin up support for "court packing in the name of ideological balance." You hear that Senator Whitehouse? Politicians should not "equate impartial justice with agreeable judicial outcomes."

Justice Ginsburg refused to step down because of her narcissism. Justice Breyer is refusing to resign because of his principles. My respect for Justice Breyer continues to grow. He has a backbone of steel. I wish some of the conservatives would exemplify such fortitude.

The book will be released on September 7. I've pre-ordered my copy.