Alas, the movie didn't include Flynt's bizarre behavior during the proceedings. Now, we have even more insights. Vice Magazine sent a FOIA request to the FBI for Flynt's files. Some of the stories are bonkers. Here are six highlights.

First, Flynt wanted to represent himself in Keeton, but the Court denied that request. And Flynt had an outburst in the Court!

At 10 o'clock that morning, Flynt arrived in the Supreme Court surrounded by bodyguards. U.S. Marshals were prepared for an outburst, as Flynt had a history of misbehaving in court, and Flynt delivered. As the justices wrapped up the hearing, Flynt shouted: "Fuck this court! You denied me counsel of my choice. I won't be judged by nine assholes and one token cunt—goddamn motherfuckers!" according to a transcript of audio recordings from the court that was part of the FBI file.

This colloquy does not appear in the Oyez transcript.

Joe DiGenova, who was the U.S. Attorney for D.C. offered this statement:

"On Nov. 8, 1983, the dignity and decorum of the United States Supreme Court—pristine for nearly two centuries—was shattered by the deliberately outrageous conduct of the defendant," was how the episode was described in a charging document signed by Joe DiGenova, the then-U.S. Attorney for the District of Columbia. DiGenova has more recently been in the limelight as a pro-Trump analyst and Fox News regular.

Second, Flynt had a Cohen v. California moment. But his shirt didn't say "Fuck the Draft." It said "Fuck this Court."

Flynt attempted to open his coat to reveal a T-shirt reading "Fuck This Court" underneath, but the marshals quickly whisked him out of the room to a side chamber, where he was placed under arrest. 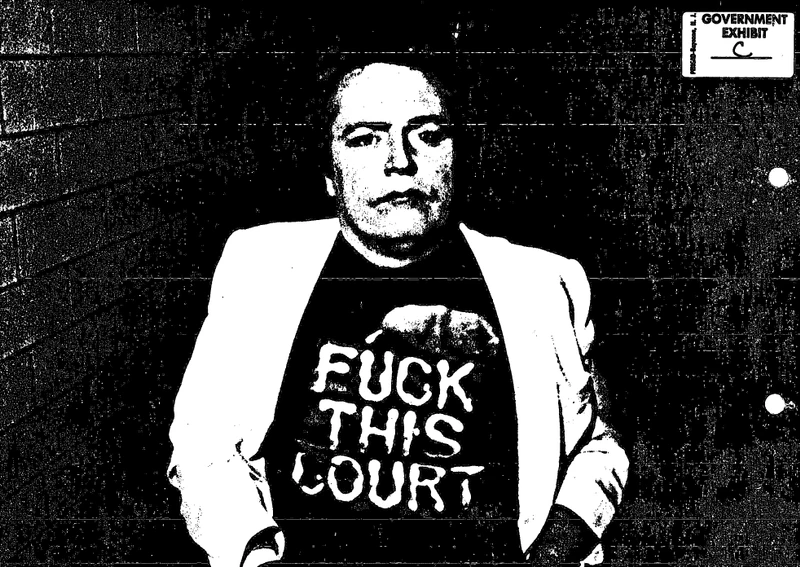 Third, Flynt needed to use the bathroom. But the Court did not have wheelchair-accessible toilets, so he was brought to a hospital!

Flynt, paralyzed from the waist down, told officers he needed to use the bathroom, several of the affidavits revealed. But as this was 1983, the Supreme Court's bathrooms were not wheelchair-accessible. Neither were the toilets at central booking. The only option was to take him to a hospital emergency room.

Officers attempted to place him in a police wagon to take him to the hospital, but they couldn't get him in with the wheelchair. A police cruiser also didn't work. Then, Flynt's lawyers offered the use of a limo they had rented that day. The offer was accepted and Flynt was driven to the clink in style.

Later that day Flynt was brought before Judge Jean Dwyer in Washington on charges of disrupting the court. He arrived still wearing the "Fuck This Court" shirt. According to a transcript of the proceeding that had been placed in Flynt's file, the judge agreed to allow him to be released if he complied with  a prosecution request that he not go to the Supreme Court again.

Flynt refused, with a rousing endorsement of the First Amendment:

"Free expression is absolute. The First Amendment is the most important amendment of the Constitution. It cannot be compromised. You do not have the right to compromise it. Neither does the Supreme Court have a right to compromise it, and when I am the next president, anybody that is responsible for perverting the constitution of this great land will be put in a glass cage and I will sell tickets so people can come to Washington and see what evil perverts really look like."

Eventually, Flynt agreed to not visit the Court during the pendency of the contempt case. And he kept his shirt:

Dwyer informed Flynt that the Supreme Court ban wasn't absolute but only for the duration of the contempt case against him. He then agreed. Before the proceeding ended, federal prosecutors asked that Flynt's shirt be taken as evidence in the case. The judge said a photograph of the offending shirt would be sufficient.

Fifth, we learn that before Keeton was argued, Flynt had sent Justice O'Connor a complimentary subscription of Hustler magazine. Generally, litigants are not allowed to engage in ex parte communications with judges. And litigants are definitely not allowed to give valuable gifts to judges. Of course, Flynt did both!

O'Connor's secretary wrote back, and asked that Flynt take her off the list. Flynt declined.

A list included in the file that detailed the subsequent correspondence noted that O'Connor's secretary wrote back asking Flynt to remove the justice from the magazine's subscription list. Flynt replied: "Fuck you, cunt. I'll take you off Hustler's subscription list when you resign from the court." He then added her to the subscription list of other magazines he published.

In 2016, I sent a copy of my book, Unraveled, to all nine Justices. I received several letters of thanks. Other Justices sent nothing. Justice Sotomayor's secretary returned the book, with a letter stating that she could not accept any writings that affected pending litigation. I framed that letter, with the other thank you notes, on my office wall. I trust that Justice O'Connor's secretary returned each issue of Hustler to the publisher.

Sixth, there is a crazy report about an attempt to put explosives in the tubing of Flynt's wheelchair.

A statement in the file from an unnamed informant claimed Flynt had sought help from an alcoholic mercenary and a private investigator to wire his wheelchair with explosives so he could blow himself up during his 1983 Supreme Court hearing and take all the justices with him.

Flynt allegedly asked Mitch WerBell, a weapons expert who ran a guerrilla training school in Georgia, and Gordon Novel, a private investigator, to fill the hollow metal tubes of his wheelchair with C-4 explosives impregnated with needles for the maximum effect, the informant said. The men refused, and WerBell later discussed swapping out Flynt's wheelchair before the hearing, in the event he managed to convince someone else to do it for him, the informant said.

Prosecutors ultimately decided not to charge Flynt with a crime, determining that any discussion of detonating himself in the Supreme Court was just idle talk.

Absolutely bonkers. What a litigant!