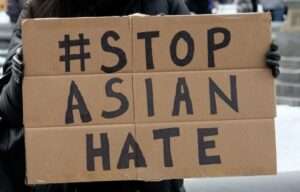 The Hill just published my new article about discrimination against Asians on both left and right. The article also explains how the two have much in common. Here is an excerpt:

The dramatic increase in hate crimes against Asian-Americans over the last year has focused attention on ongoing prejudice and discrimination against this minority group. Many on the left understandably blame Donald Trump's and other right-wing politicians' irresponsible rhetoric about the Coronavirus crisis, which often blurred the line between blaming the Chinese government (which does indeed deserve condemnation for its actions), and blaming Chinese people more generally. The right also deserves condemnation for its increasing hostility to Asian immigrants and refugees, epitomized by GOP Sen. Ted Cruz's scuttling of efforts to grant asylum to Hong Kong refugees fleeing Chinese repression, on the specious ground that they are a threat to national security.

For their part, many conservatives have highlighted the growing trend of elite universities and high schools seeking to reduce the percentage of Asian-Americans in their student bodies. This type of anti-Asian discrimination is primarily driven by left-wing public officials and university administrators.

Lost in this partisan war of words is the reality that both the right and left-wing versions of anti-Asian bigotry deserve condemnation. The two rest on similar flawed foundations and perpetrate similar injustices….

While superficially different, left- and right-wing versions of anti-Asian discrimination actually have much in common. Both rely on crude ethnic generalizations about a highly diverse group. Lumping such different groups as Chinese, Japanese, Indians, and Filipinos into a single category — as school and university administrators routinely do — makes no sense under either the "diversity" or compensatory justice rationales offered to justify racial preferences in education. Among other things, it ignores the fact that many Asian-American groups themselves have historically been victims of discrimination. The same goes for right-wing tendencies to paint Chinese immigrants and students as a threat to our culture and national security — a generalization that ignores the fact that many of them are here precisely because they wish to escape the repressive policies of the Chinese government. In these instances, both right and left judge Asians by the color of their skin and their racial and ethnic ancestry, not by the "content of their character."

Right and left-wing hostility to Asians also often rests on the fallacy that there is a zero-sum game between the interests of different ethnic groups….