Terry v. United States has a fascinating procedural posture. The petition presented a question about the application of the First Step Act as applied to "pre-August 3, 2010 crack offenders." In December 2020, Acting SG Jeff Wall opposed the petition. And on January 8, 2021–twelve days before the inauguration–the Court granted certiorari. On March 12, the Court set oral argument for April 20. Three days later, on March 15, the government's reply brief was due. Beware the Ides of March. The United States did not file a reply brief.  Instead, Acting Solicitor General Prelogar filed a letter. She wrote that after the "change in administration," the government switched positions:

Following the change in Administration, the Department of Justice began a process of reviewing the government's interpretation of Section 404 of the First Step Act. As a result of that review, the Department of Justice has concluded that petitioner's conviction is a "covered offense" under Section 404, that petitioner is entitled to request a reduced sentence, and that the court of appeals erred in concluding otherwise.

As a result, the government suggested the Court appoint an amicus curiae to defend the judgment below. Generally, given the late nature of this switch, the Court would simply reschedule the case for the October 2021 Term. But that option would create other problems. Prelogar explained that under the government's new position, Terry would complete his sentence on September 22, 2021–before the start of the new term. The Acting SG explained "[w]ere the case not to be decided before September 22, a question of mootness would arise that would need to be addressed before any decision on the merits." Terry also filed a letter that same day, urging the Court to "resolve the question presented this Term, as the Court originally intended."

In response, the Court moved quickly. One week after the government's letter, on March 19, the Court removed the case from the calendar. Next, the Court appointed Professor Adam Mortara to argue in support of the judgment below. I think this was Circuit Justice Amy Coney Barrett's first amicus appointment. (Update: I made an error here. This case arose from the 11th, not 7th Circuit. Circuit Justice Thomas would have made the appointment). Mortara is well equipped to handle this case on an expedited basis. At the time, the Court indicated that "The case will be rescheduled for argument this Term." On March 25, the Court set a super-expedited briefing schedule. Mortara's brief would be due on April 13. The reply brief was due on April 28. And the case was set for argument on May 4–about one week after the final scheduled argument date on April 28.

The SG really jammed up the Court here. The SG took two months to reverse positions. And it waited till the reply brief was due. This late switch tells me that the SG probably had a brief ready to file, but at the last minute, the powers-that-be made the final decision. No doubt criminal justice groups were lobbying the government.  Had the decision been made earlier in the term, the Court could have maintained it April argument date. But instead, the Department of Justice waited till the last conceivable moment. Indeed, Terry faulted the government for the undue delay:

That the United States waited to confess error until today—the day its merits brief was due and three months after the change in administrations—should not be allowed to prejudice Petitioner and others who are similarly situated.

Terry is right. The government's indecisiveness put the Court and the petitioner in a very difficult position. By waiting so long, the SG forced the Court to schedule a very rare May sitting.

In 2017, I researched all of the May sittings over the past quarter century. I was able to find three. All involved pressing matters. First, Raines v. Byrd (1996) involved the constitutionality of the Line Item Veto Act. Second, Felker v. Turpin (1996) involved the constitutionality of AEDPA. Third, Swidler & Berlin v. U.S. (1998) involved the Independent Counsel's request for handwritten notes from Vince Foster's attorney. Fun Fact: this case case was Brett Kavanaugh's first, and only argument before the Supreme Court.

Terry presents a legitimate circuit split, but it doesn't come even remotely close to the imperative nature of these other cases. The Court was forced to schedule a May sitting to avoid a mootness argument the following term for a single petitioner. (I wonder if the cert pool memo flagged this possible vehicle issue).

This extended calendar also led to another first. On March 31, the United States filed a motion for leave to file a brief out of time. Based on my quick research, I was only able to find one other instances in which the government filed such a motion. (I excluded cases where the government wished to file an amicus brief)). Court watchers may be able to guess. Hint: the case was decided in 1983. Another hint, I wrote about the case in a recent post.

The answer is Bob Jones v. United States (1983). Not the best company to be with. The posture of Bob Jones was tortured. You can find the docket of this case on p. 36 of this archive.

In February 1982, the Government filed a motion to file a brief out of time. 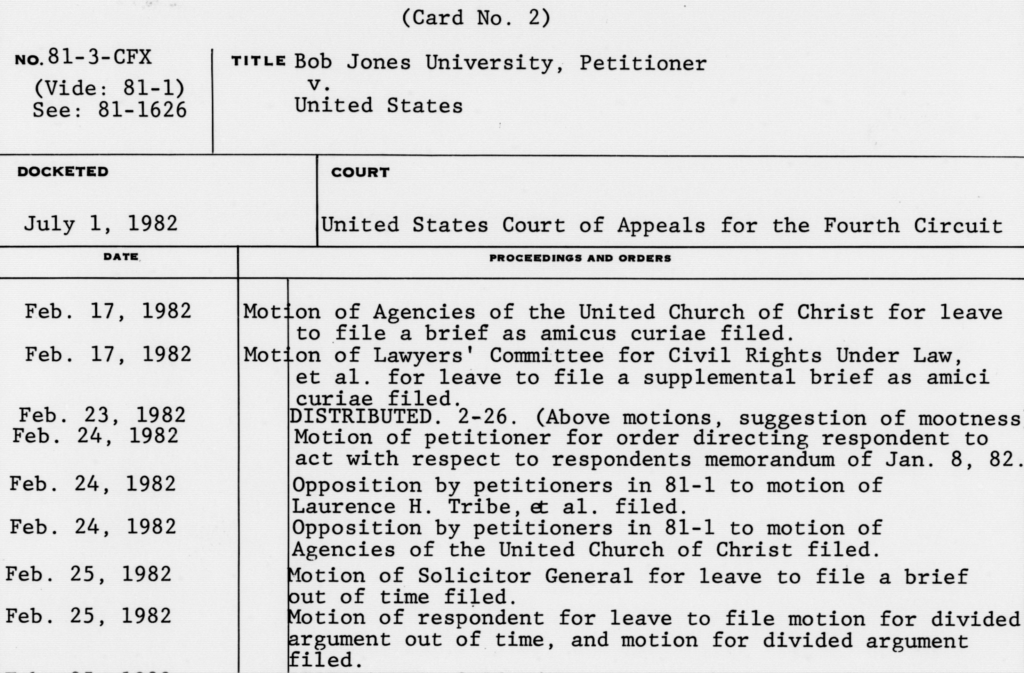 And that motion was granted in April 1982:

Law students everywhere can now cite this practice as an excuse for tardy submissions. (Not in my class). If I missed any other such motions, please email me.

On Monday, April 5, the Court granted the Acting SG's motion to file the brief out of time. The Court also gave the SG divided argument time in Terry. I would not be surprised if the Justices vent their frustration over the government's litigation position. I recognize that many of the Biden Administration's reversals are due to genuine differences of position. But the Acting SG bungled Terry. And President Biden's failure to timely nominate an SG may have had negative consequences on the government's positions before the Court. (And there is still no nomination).