This post is adapted from our new book, Mine!: How the Hidden Rules of Ownership Control Our Lives, available March 2. To learn more about the book, visit minethebook.com. 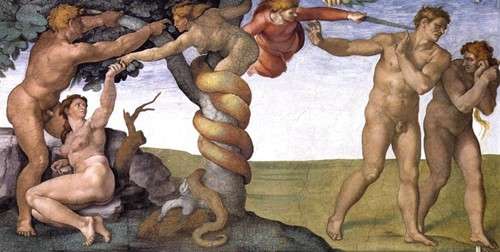 The idea of ownership seems natural and beyond contest.  You know what it means to own stuff, whether you're buying a new home or claiming the last slice of pie.  Mine couldn't be simpler.

But a lot of what you know about ownership is wrong.

As we have shown in the blog posts this week, once you understand how the rules actually work, you will see the drama taking place beneath our workaday ownership.  Governments, businesses, and ordinary people are constantly changing the rules on who gets what and why.  Each of these choices creates winners and losers.  And this has always been so. At its core, human society exists to help us deal with competing claims to scarce resources—whether it's food, water, gold, or sexual partners—so that we don't kill each other too often.

Even the Garden of Eden story turns on ownership.  God instructs Adam and Eve that the Tree of Knowledge and its fruit belong to God alone.  It's mine.  Don't touch.  But the first people pluck the apple, are evicted from the Garden, and human history begins.  Since then, ownership has been up for grabs. And ownership conflicts present themselves where you might least expect.

Ownership invisibly shapes every single day of our lives. Every minute. These are the rules that determine who gets what and why. Whether you stand at the front of the line or the back. It's the medications you take, what you drive, where you live. What you can listen to and watch. We encounter the rules of ownership all the time without noticing, like fish swimming in water.

It's no coincidence that in every culture "mine" is one of the first words babies speak. Spend any time in a playground, and all you will hear is kids shouting mine, mine, mine. One kid shouts, "I had it first. It's mine!" The other cries back, "Mine! I'm holding the shovel."

You may tune out this shouting match. But if you listen carefully, you can learn something subtle and revealing about ownership. Each child is asserting an ownership story – in our example, it's "first come, first served" versus "possession is nine-tenths of the law." First-in-time and possession are two of the six stories that everyone uses to claim everything in the world. Only six:

Owners of valuable resources are always trying to figure out the particular story for "mine" that will influence others to do their will at the lowest cost and with the least hassle.  Simply by tweaking each story, they can steer you and everyone around you invisibly, gently, but powerfully to act how they want.  Yet notions of "mine" are so incorporated into our everyday behavior that we don't even notice how the rules have been chopped up, fine-tuned, and redefined to push us this way or that.

Don't be fooled.  Each side claims the moral high ground, each side wants the law bent towards its view. But there is no natural, correct rule for who owns what. It all comes down to competing stories. And because ownership is a story-telling battle, that also means it's up for grabs. The prize goes to those who know how its hidden rules really work.

Once you start looking for competing ownership stories, you will see them everywhere. We guarantee there's a newspaper headline today that snaps into focus once you understand how ownership really works—just look at current debates over who counts as "first" for the Covid-19 vaccine.

In Mine! we explore fun, surprising, and often infuriating real-life stories that reveal who gets what in the 21st century. Remarkably, governments and businesses use the exact same six simple stories kids assert to solve fights on the playground—and these stories offer our best chance to address really big problems like preserving online freedom, cooling our warming planet, and curbing America's new wealth aristocracy.

If the tools of modern microeconomic analysis interest you, then look at Freakonomics, where Steven Levitt and Stephen Dubner explain everything from cheating and crime to parenting and sports.  If you're more psychologically minded, read Nudge, where Cass Sunstein and Richard Thaler show how to improve our decisions on health, wealth, and happiness.  Economics and psychology are great tools.  They explain a lot.  But they also miss a lot.  Both tend to take ownership for granted, when it is anything but fixed.  If you want to see how the hidden rules of ownership really work, then Mine! is for you.

Thank you so much to the Volokh Conspiracy for inviting us to guest post over this past week.  If you are interested in having us talk at your business, organization, or school, please get in touch.  We love to discuss all things Mine!