From the New York Times obituary for Walter Bernstein (no relation), a blacklisted Hollywood screenwriter, has this to say about his ties to the Communist Party, USA:

"I didn't join the party until after the war," Mr. Bernstein said, although the events of the '30s, including the Depression, the Spanish Civil War and the rise of fascism in Europe, made the Communist cause attractive to him. "The Communists," he said, "seemed like they were doing something."….

Mr. Bernstein was considered untouchable both in Hollywood and in the fledgling television industry in New York once his name had appeared in "Red Channels," an anti-Communist tract published in 1950 by the right-wing journal Counterattack.

"I was listed right after Lenny Bernstein," Mr. Bernstein recalled. "There were about eight listings for me, and they were all true." He had indeed written for the leftist New Masses, been a member of the Communist Party and supported Soviet relief, the Loyalists in the Spanish Civil War and civil rights.

If I had read this without knowing Bernstein's biography, I would have been led to believe that Bernstein became interested in the Communist Party in the 1930s [he in fact joined the Young Communist League, the Party's youth wing, in 1937] because of despair over the Depression and concern about fascism. He was later punished for having once belonged to the Party, as well as his support for the leftists in Spain and for civil rights.

In fact, Bernstein was a member of the American Communist Party and remained so until 1956. In other words, he remained a[n affiliate and then] member of the Soviet-controlled and overtly pro-Soviet CPUSA through Stalin's pact with Hitler, through the antisemitic post-World War II purges, through the Soviet domination of Eastern Europe–through the point where any reasonable person would have been aware of Stalin's crimes.

[UPDATE from Prof. Harvey Klehr, an expert on American Communism:

Some additional details that reveal both the Times inability to ever get a story about American communists right and Bernstein's own mendacity. Bernstein admitted in his autobiography that he joined the Young Communist League in 1937;claiming he joined the Party after WWII was not entirely honest. And, in the Venona decryptions, there is a 1944 message wherein the New York station of the KGB reported that he had met with "Khan," likely Avrom Landy, an American communist who acted as a liaison with the KGB. Bernstein, whose name is given in plain text- no code name- "welcomed the re-establishment of liaison with him and promised to write a report on his trip by the first of November." The trip was quite probably a journey to Yugoslavia while a correspondent for Yank, during which Bernstein became the first Western newsman to obtain an interview with Josip Tito. In his autobiography Bernstein admitted that the interview was an act of subversion, "against American policy in Yugoslavia." And, he claimed that a Soviet diplomatic official asked him about the trip but he refused to answer his questions. But he admitted speaking to Landry!]

When the blacklist was started, Joseph Stalin, one of the great mass murderers in human history, controlled the Soviet Union, a totalitarian, repressive, imperialist nation that was involved in a Cold War with the United States. As we have seen, hardcore CPUSA members were as a rule loyal to this dictatorship and not the United States,and screenwriters were obligated to try to use their positions to promote Communism….

[M]ost of those blacklisted were at least as morally complicit in Stalinist crimes100 as a typical American Nazi of the 1930s and 40s was complicit in Nazi crimes. Communist screenwriters, in particular, "defended the Stalinist regime, accepted the Comintern's policies and about-faces and criticized enemies and allies alike with infuriating selfrighteousness …. screen artist reds became apologists for crimes of monstrous dimensions. … film Reds in particular never displayed any independence of mind or organization vis-a-vis the Comintern and the Soviet Union." Nor was the screenwriters' Communist activism irrelevant to their jobs, as they actively sought to maximize Communist and pro-Soviet sentiment in films, and minimize the opposite. Screenwriter and leading Communist John Howard Lawson urged his comrades to "get five minutes of Party doctrine into every film, and to place such moments in expensive scenes so that they would not be cut by the producer."

One can certainly debate whether, in the absence of criminal liability, being a Soviet stooge during Stalin's reign merited blacklisting. One cannot argue, however, that Soviet stooges were not Soviet stooges, but that seems to have become the default assertion about blacklisted Hollywood writers among the cultural elite.

[Update: I'm getting feedback that the Hollywood blacklist mostly caught up people with left-wing politics who were not involved in Communism. This is a myth, as discussed here: "According to Ronald Radosh, co-author of Red Star Over Hollywood: The Film Colony's Long Romance With The Left (2005), and an expert on American Communism, not only were all of the Hollywood Ten members of the CPUSA at the time they were blacklisted, so were approximately 98 per cent of all of the Hollywood blacklist's targets."]

The Jewish Telegraphic Agency (the Jewish media's equivalent of the AP) does the Times one better:

Walter Bernstein, a proudly "secular" Jewish screenwriter best known for his 1960s and '70s dramas and for being blacklisted during the McCarthy era, has died at 101….

Bernstein, born to a Jewish family in Brooklyn, called himself a "secular, self-loving Jew of a leftist persuasion," according to the Times.

That persuasion got him labeled as a communist sympathizer in the 1950s, when the infamous House Un-American Activities Committee cracked down on leftist attitudes in Hollywood.

Quite obviously, what got him labeled as a "communist sympathizer" was that he was a member of the Communist Party USA. As for being a self-loving Jew, I can't speak to his later sentiments, but any Jew who continued to support Stalin through his murder of leading Jewish cultural figures and the "Doctors' Plot" isn't at the top of my list for a B'nai B'rith award.

The way domestic pro-Soviet Communism is treated in popular culture, as if it was a figment of the right-wing imagination (as suggested by the term "witch hunts" and Arthur Miller's play on that topic) is bizarre. In addition to the persistent insistence that actual members of the CPUSA like Bernstein were either never Communists or just had a brief dalliance with Communism, we have the consistent attribution of JFK's murder by Lee Harvey Oswald, who by then had graduated from pro-Soviet to pro-Cuban Communism, to vague right-wing forces. We also have the remarkable heroine status of Angela Davis (she stars, for example, in Ibram Kendi's work), despite her long history as a shill for the USSR and East Germany. (She is pictured below with East Germany's dictator Erich Honecker. She remained an active member of the CPUSA until its collapse in 1991.) 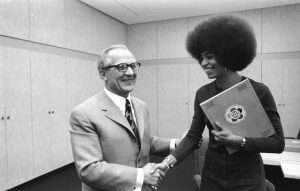