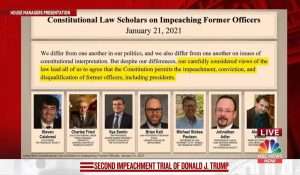 A letter on the constitutionality of impeachment of former officials signed by some 170 legal scholars made an appearance in today's Senate impeachment trial presentation the House managers making the case against Trump. A TV image of the slide the managers used is reproduced above.

The letter was signed by a wide range of constitutional law scholars across the political spectrum, including VC bloggers Jonathan Adler, Sasha Volokh, and myself. Other prominent conservative or libertarian signers include include Steve Calabresi (co-founder of the Federalist Society, and leading academic expert on executive power) and Michael Stokes Paulsen (a prominent academic expert on impeachment and executive power). It was also signed by Prof. Brian Kalt, author of the leading academic article on the subject of impeaching former officials.

Another VC co-blogger, Prof. Keith Whittington of Princeton University, did not sign the letter, but has written an excellent article on Lawfare reaching the same conclusion. Keith is one of the nation's leading right-of-center originalist legal scholars. I myself previously wrote about the issue here. I previously blogged about the letter and its significance here.