Reason is supported by:
Nickolas Fink

From the Complaint in Diei v. Boyd, filed Wednesday by the Foundation for Individual Rights in Education:

[1.] Kimberly Diei brings this First Amendment lawsuit because her public university is violating her constitutional rights by policing her personal, off-campus expression on social media. Diei was nearly expelled from the University of Tennessee Health Science Center College of Pharmacy after university officials twice investigated her personal social media activity, concluding some of her posts were too "crude," "vulgar," or "sexual." Because of the vague, subjective standards employed by university officials during this shocking ordeal, Diei fears that participating in everyday discussions online may again put her doctoral degree at risk. The First and Fourteenth Amendments do not allow this result.

[2.] A University of Chicago graduate now pursuing a Doctor of Pharmacy degree, Diei is an excellent student. Outside of school, Diei expresses herself on social media using the pseudonym "KimmyKasi." In particular, Diei enjoys commenting on topics of interest to her and other young, black social media users, occasionally using profanity and freely expressing her views about sexuality. None of her posts identify her as a College of Pharmacy student or indicate any affiliation with the University of Tennessee.

Despite punishing Diei twice under these "various professionalism codes," the Committee never provided them to Diei. To this day, Diei does not know what policy she violated or what expression the College of Pharmacy considers too "sexual," "crude," or "vulgar" for its doctoral students' social media activity. Although Diei successfully appealed her expulsion, Diei fears that it is simply a matter of time before the Committee begins another investigation into her protected expression on social media.

[4.] The College of Pharmacy cannot police and punish the protected expression of students like Kimberly Diei simply because officials do not like or understand it. Papish v. Bd. of Curators of Univ. of Mo., 410 U.S. 667, 670 (1973) ("[T]he mere dissemination of ideas—no matter how offensive to good taste—on a state university campus may not be shut off in the name alone of 'conventions of decency.'"). "[S]tate colleges and universities are not enclaves immune from the sweep of the First Amendment." Healy v. James, 408 U.S. 169, 180 (1972). Accordingly, public institutions cannot investigate or discipline—let alone expel—students for speech protected by the First Amendment. See Speech First, Inc. v. Schlissel, 939 F.3d 756, 765–66 (6th Cir. 2019). But that is exactly what the University of Tennessee Health Science Center College of Pharmacy tried to do…

[60.] For example, in the following tweet, Diei contributed to a trending discussion on Twitter about the song "WAP" by Cardi B featuring Megan Thee Stallion by suggesting lyrics for a possible remix:

[62.] In another tweet, Diei defended the lyrics of "WAP" against criticism from other users—who were arguing that those lyrics were inappropriate—by pointing out that humans are inherently sexual beings:

[63.] And in another tweet, Diei joked about the amount of time she spends getting prepared to go out for the evening by referencing the popular song "Partition" by Beyoncé: 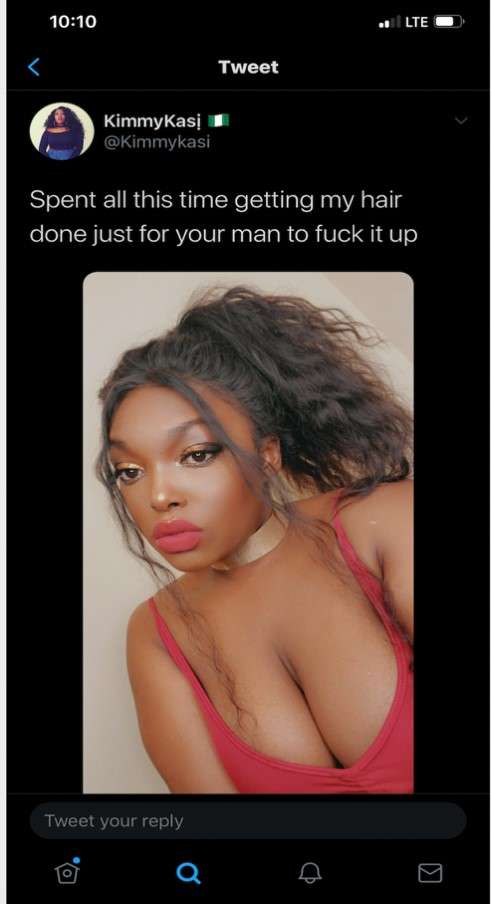 FIRE is clearly right here. Indeed, Diei's speech would be protected against expulsion or other university discipline even if it were said on campus, or with an indication that Diei was a University of Tennessee pharmacy student. The right to speak includes the right to speak about sex, without euphemism and circumlocution; the law still recognizes a narrow obscenity exception, but none of this would qualify. (Such speech could be excluded, alongside a good deal of other speech, from faculty- or administration-curated discussions or publications, for instance class conversations or alumni magazines, but that's a separate matter.)

Here's my casebook's excerpt from Papish, the 1973 precedent that FIRE cites:

Petitioner [Barbara Papish], a graduate student in the University of Missouri School of Journalism, was expelled for distributing on campus a newspaper "containing forms of indecent speech" in violation of a bylaw of the Board of Curators…. The particular newspaper issue in question was found to be unacceptable for two reasons. First, on the front cover the publishers had reproduced a political cartoon previously printed in another newspaper depicting policemen raping the Statue of Liberty and the Goddess of Justice. The caption under the cartoon read: "… With Liberty and Justice for All." Secondly, the issue contained an article entitled "M_____f_____ Acquitted," which discussed the trial and acquittal on an assault charge of a New York City youth who was a member of an organization known as "Up Against the Wall, M_____f_____."

Healy v. James (1972) makes it clear that the mere dissemination of ideas—no matter how offensive to good taste—on a state university campus may not be shut off in the name alone of "conventions of decency." Other recent precedents of this Court make it equally clear that neither the political cartoon nor the headline story involved in this case can be labeled as constitutionally obscene or otherwise unprotected…. [Nor can] the University's action here … be viewed as an exercise of its legitimate authority to enforce reasonable regulations as to the time, place, and manner of speech and its dissemination…. [P]etitioner was expelled because of the disapproved content of the newspaper rather than the time, place, or manner of its distribution.

Since the First Amendment leaves no room for the operation of a dual standard in the academic community with respect to the content of speech, and because the state University's action here cannot be justified as a nondiscriminatory application of reasonable rules governing conduct, [the expulsion] below must be reversed.

[That] petitioner could not be criminally prosecuted by the Missouri state courts for the conduct in question … [does not mean that] she may not therefore be expelled from the University of Missouri for the same conduct. A state university is an establishment for the purpose of educating the State's young people, supported by the tax revenues of the State's citizens. The notion that the officials lawfully charged with the governance of the university have so little control over the environment for which they are responsible that they may not prevent the public distribution of a newspaper on campus which contained the language described in the Court's opinion is quite unacceptable to me.

But that view was rejected by the majority.

As you might gather, the word expurgated in the opinion, though not by the dissenting opinion in the Court of Appeals, was "motherfucker." It seems likely that the decision to expurgate stemmed from the preference of the author of the per curiam, who was later revealed to be Justice Powell; compare Cohen v. California (1971), Hess v. Indiana (1973) (including Justice Rehnquist's dissent, likewise joined by Chief Justice Burger and Justice Blackman), and FCC v. Pacifica Foundation (1978), which fully spell out vulgarities.

UPDATE: For a similar case, involving discipline of a medical student for harsh criticism of abortion right supporters, see here. Unfortunately, that student's lawsuit was dismissed on qualified immunity grounds, and the Tenth Circuit affirmed the dismissal (wrongly, I think). The Diei lawsuit I'm discussing here, though, also seeks declaratory relief and an injunction, and the qualified immunity defense won't apply to that.

Dallas Police Took $106,000 From a Traveler. They Haven't Explained Why.

Elon Musk: Government Is 'the Biggest Corporation, With a Monopoly on Violence, Where You Have No Recourse'

New York City's Bryant Park Was a Hot Mess. Then It Was Privatized.