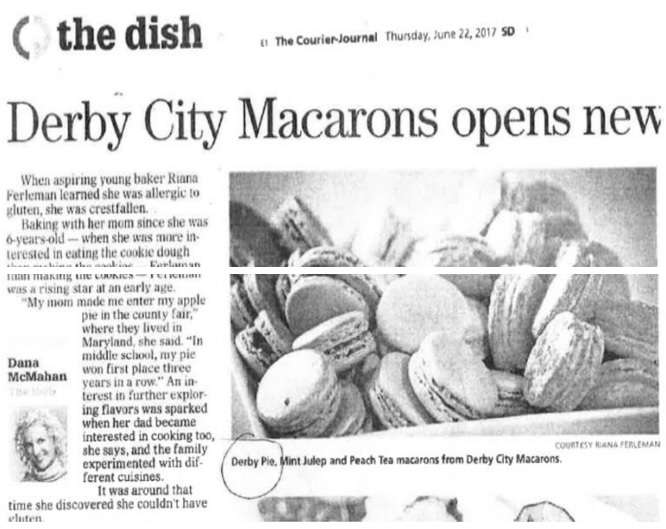 This led to a trademark lawsuit by Alan Rupp, who "owns DERBY-PIE®, a federal trademark for a 'well-known chocolate nut pie'"; but the Sixth Circuit rejected the claim:

"The touchstone of [trademark infringement] liability … is whether the defendant's use of the disputed mark is likely to cause confusion among consumers regarding the origin of the goods offered by the parties." "[T]he likelihood of confusion analysis … involves a preliminary question: whether the defendants 'are using the challenged mark in a way that identifies the source of their goods.' If they are not, then the mark is being used in a "'non-trademark" way' and trademark infringement laws … do not even apply." …

The second article at issue here is a biographical piece about a Louisville baker who makes various flavors of macarons, one of which is "Derby Pie[.]" Since the article is an in-depth look at the story of an independent, small business owner, i.e., a baker, who makes "Derby Pie" flavored macarons, not pies, a reader could not possibly "notice [Rupp's trademark] … and then think that the ['Derby Pie' macaron] may be produced by the same company (or a company affiliated with the company) that makes [DERBY-PIE®]."

"Derby Pie[,]" like "Mint Julep" and "Peach Tea" as used in the article, informs the reader of the general flavor, not the origin, of the macaron. Importantly, the origin of the "Derby Pie" macaron is explicitly identified as the independent baker discussed in the article, not Rupp (or Kern's Kitchen, which appears to be the company that actually makes the DERBY-PIE®)—"Derby Pie" cannot be said to identify the source of the macaron when the actual source of the macaron is explicitly identified in that article. Nor can it be said that an association between Rupp and the "Derby Pie" macaron was suggested. Although Rupp's complaint states he "ha[s] applied … DERBY-PIE® to various products sold on a nationwide basis[,]" he has never specifically asserted that he (or Kern's Kitchen) produces macarons, nor has he alleged error in the district court's finding that "[a] DERBY-PIE® is a pie[,]" not a macaron.

Similarly, "Derby pie" as used in the first article does not denote the recipe for the DERBY-PIE® but a recipe for a "Derby pie": "'It happens all the time,' says [counsel for Rupp]. People say Derby-Pie® as shorthand for chocolate nut pie the way they say Xerox when what they mean is copy or copier." As used in the article, "Derby pie" simply informs the reader of the type of pie—a chocolate-walnut pie—that the reader can make from the recipe provided. Rupp's own evidence indicates that "Derby pie" can be used in this way, similar to the way that "Chess pie" would be used were that phrase trademarked. Such a non-trademark use of "Derby pie" is also supported by the fact that the Courier-Journal, like it did in the second article, twice identified the source of the recipe as Captain's Quarters (restaurant), not Rupp (or Kern's Kitchen).

Nor can it be said that an association between Rupp and the "Derby pie" recipe was suggested. The "Derby pie" described in the first article is "sufficiently different" from DERBY-PIE®. An exhibit submitted by Rupp himself in support of his response to the Courier-Journal's motion to dismiss notes that "Derby-Pie contains no bourbon …."  Although just a difference of one ingredient, Rupp's own evidence reveals that no reader of an article describing a "Derby pie" with bourbon, especially one called a "state original[,]" would associate such a pie with DERBY-PIE®. And, the recipe does not simply differ from DERBY-PIE® in the addition of one ingredient, but it is also missing a key ingredient present in DERBY-PIE®—vanilla….

The district court further justified such a conclusion by pointing to the structure of the phrase "Derby pie" as used in the first article. Because the first article was published "[o]n the same day as the 2017 Kentucky Derby," the district court found that "the headline … uses 'Derby' to modify 'pie,' not to identify the source of the product as DERBY-PIE®. This is analogous to using 'Derby' to modify 'horse,' 'hat,' or 'party' and does not constitute an impermissible use of the Mark." In other words, the district court recognized that the Courier-Journal's use of "Derby pie" in its first article is a typical play on words seen in newspapers that, here, both tips off the reader to the generic flavor of pie discussed and the event celebrated by the making of that pie. In neither of these ways, however, is the phrase used to designate the product as DERBY-PIE®….