Whether to impeach the President need not depend on whether he incited the attack on the Capitol or stopped just short of incitement. (A sentence I never expected to write.) One proper ground for impeachment is rather simpler, and a matter of public record.

Last Wednesday, Trump publicly urged Vice President Pence to interfere with the counting of the electoral votes. He maintained that Pence, and Pence alone, could "send it back" to the states for the appointment of different electors. And he complained bitterly when Pence failed to do so: 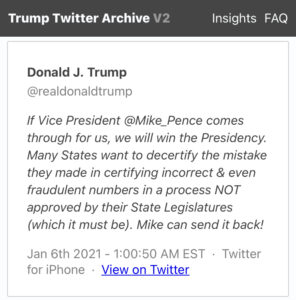 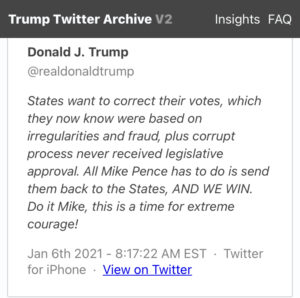 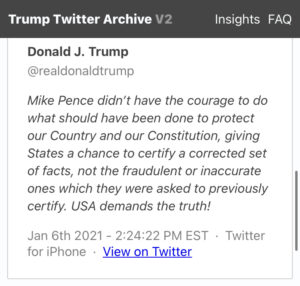 Suppose that Pence had listened. Suppose that he had announced from the dais, when Arizona's electoral votes were opened, "I am sending this certificate back to Arizona for the appointment of new electors."

That would have been impeachable. The Twelfth Amendment required Pence, "in the presence of the Senate and House of Representatives, [to] open all the certificates," at which point "the votes shall then be counted." Whether the states ought to have appointed different electors was the subject of much litigation, now resolved. Whether these certificates were the authentic certificates, listing the votes of those electors they did appoint, even the President did not dispute. And whether or not the Electoral Count Act empowered Congress to vote on objections, Pence had no authority to decide the matter on his own. For Pence to interfere with the count, hoping to remain in office beyond the end of his term, would have been a plain breach of his constitutional duties.

Many people saw Trump's efforts as foolish, and the hopes he held out of continuing in power (notwithstanding the electoral college vote) as unserious. But other people took them seriously. Thus the Capitol was attacked. The President's faithlessness has cost five people their lives, and his impeachment is already overdue.