There are rumblings that President Trump's cabinet may invoke Section 4 of the 25th Amendment.

JUST IN: "This is not news we deliver lightly," @margbrennan says as she reports: Trump Cabinet secretaries are discussing invoking the 25th Amendment to remove President Trump. Nothing formal yet presented to VP Pence.

"I'm talking about actual members of the Cabinet," she says

I am deeply grateful to Professor Brian Kalt, who wrote the definitive book on this once-obscure provision of the Constitution. He created this helpful graphic to explain how the 25th Amendment operates. 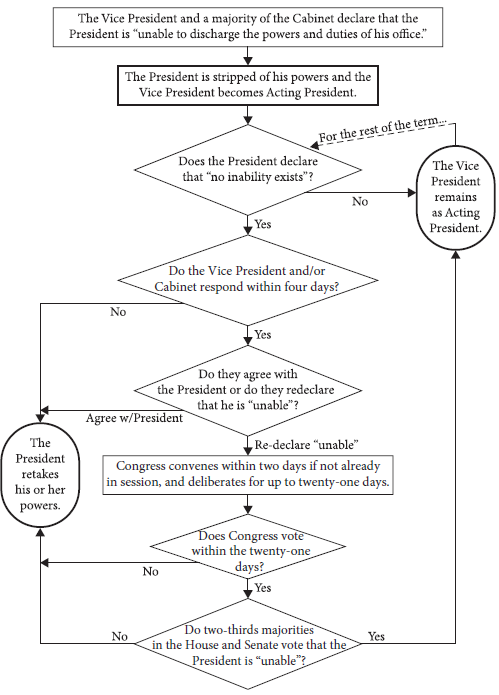 Here, I wish to break down the logistics. There are currently 15 Cabinet Members who could vote on a 25th Amendment declaration. According to Professor Kalt, acting members should be allowed to vote. Professor Anne Joseph O'Connell disagrees.

The 15 current members are:

If Vice President Pence, and eight of these fifteen cabinet members, "transmit to the President pro tempore of the Senate and the Speaker of the House of Representatives their written declaration that the President is unable to discharge the powers and duties of his office," then Mike Pence immediately becomes Acting President. Because there is some debate about whether acting cabinet members can vote, it would be safe to have at least 8 confirmed cabinet members vote to remove.

At that point, Trump would "transmit[] to the President pro tempore of the Senate and the Speaker of the House of Representatives his written declaration that no inability exists." Thereafter, The Vice President, and the cabinet members have four days to take another vote. During that four day period, Pence remains as Acting President. If Pence and eight members of the cabinet agree that Trump is still "unable to discharge the powers and duties of his office," then Pence remains as Acting President.

At that point Congress has up to 21 days to determine whether Trump is "unable to discharge the powers and duties of his office." It would take 2/3 of the House and Senate to remove Trump from office. That vote would likely fail. But, we are less than 21 days till the inauguration. In theory, Speaker Pelosi and Leader McConnell could simply run out the clock, and not bring up a vote in two weeks. On January 20 at noon, Joe Biden will take the oath of office.

In short, if VP Pence and a majority of the cabinet vote to remove Trump, there is little chance that Trump would return to the Presidency–absent another election.

I raise one possible cliffhanger. Trump could preemptively fire everyone in his cabinet who does not pledge fealty, and then use the Vacancies Reform Act to install loyalists as acting cabinet heads. That could deprive Pence of a majority. It is also possible that cabinet members may resign. There are further rumblings of possible resignations.

Based on some of my conversations today I think 1600 is going to be a pretty solitary place for the next couple weeks.

With resignations, Trump may also be able to appoint loyalists as cabinet members. The denominator remains 15, no matter what.

Now Trump would need help to execute that sort of Vacancies Reform Act move. I suspect White House Counsel Pat Cipollone would resign rather than help with this purge.

Stay tuned. And please email me if I made an error. I wrote this post in haste.

Update: Tonight I appeared on Houston's NBC Affiliate, and spoke briefly about the 25th Amendment.