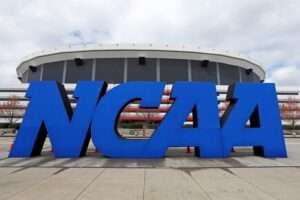 The Supreme Court will hear a landmark antitrust case against the NCAA that could upend the business model for college sports by allowing colleges to compensate student athletes.

A group of current and former players challenged the NCAA rules that prohibit athletes from accepting money or other forms of compensation. Following a 2019 trial, a federal judge found the restrictions anti-competitive and said the NCAA must allow colleges to offer student athletes education-related benefits, such as graduate school scholarships, study abroad opportunities or computers for educational use.

The U.S. Court of Appeals for the 9th Circuit affirmed that decision earlier this year.

Economists have long argued that the NCAA rules barring compensation for athletes are essentially a thinly veiled cartel, complete with severe punishment for defecting participants, all the way up to the "death penalty." The main difference with other cartels is that the NCAA system has better PR, and has thereby managed to persuade many people that they are actually serving the public interest by promoting tradition and protecting the integrity of "student athletes." That said, I don't know enough about antitrust law to know who should prevail on the legal issues in the case. I will leave those questions to others with greater relevant expertise.

Legal issues aside, however, there is a strong policy rationale for ending restrictions on student athletes compensation. I summarized it back in 2010 and 2011, building on earlier pieces by economists David Henderson and Nobel Prize winner Gary Becker. Most of what they and I said remains relevant today. As Henderson put it:

The NCAA runs a tightly controlled cartel whose "profits" go to colleges and coaches. It's not simply a private cartel but one backed by government force. Armen Alchian and William Allen, in their 1964 textbook, University Economics, were the first people I know to point this out. They pointed out that those colleges that decided to pay athletes would find their academic accreditation at risk. So why don't new schools sense a profit to made and then enter and compete players away by paying them? Alchian and Allen answer: "[N]o new school could get subsidies from the state or major philanthropic foundations without recognition by the present accreditation group." They add, "We have finally arrived at the source of the value of membership in the NCAA and related organizations: subsidized education."

One could argue, "Well, the student athletes will cash in on their skills later when they go on to become professional athletes." Not so, as the NCAA admits in its advertising [noting that most players don't go on to professional careers].

The toughest competition for basketball and football players occurs at the Division I level. These sports have both large attendances at games-sometimes, more than 100,000 persons attend college football games- and widespread television coverage…. Absent the rules enforced by the NCAA, the competition for players would stiffen, especially for the big stars…

To avoid that outcome, the NCAA sharply limits the number of athletic scholarships, and even more importantly, limits the size of the scholarships that schools can offer the best players….

It is impossible for an outsider to look at these rules without concluding that their main aim is to make the NCAA an effective cartel that severely constrains competition among schools for players. The NCAA defends these rules by claiming that their main purpose is to prevent exploitation of student-athletes, to provide a more equitable system of recruitment that enables many colleges to maintain football and basketball programs and actively search for athletes, and to insure that the athletes become students as well as athletes.

Unfortunately for the NCAA, the facts are blatantly inconsistent with these defenses….

A large fraction of the Division I players in basketball and football, the two big money sports, are recruited from poor families; many of them are African-Americans from inner cities and rural areas. Every restriction on the size of scholarships that can be given to athletes in these sports usually takes money away from poor athletes and their families, and in effect transfers these resources to richer students in the form of lower tuition and cheaper tickets for games…

A few of my own thoughts from those earlier posts:

[T]he NCAA cartel is not just a private arrangement. It is propped up by the federal government, which uses the threat of denying federal funding to force schools to comply with cartel rules. If this federal intervention were lifted, the cartel might well fall apart…

The traditional NCAA response to such criticism is that the players are "scholar-athletes" who get compensated with education. This is probably true for many college athletes in lesser-known sports. In Division I football and basketball however, the players are essentially full-time professionals. Most of them have little time to spend on their studies, and many have academic credentials far weaker than those of the regular students at their schools. Few people can do well academically if placed at an institution where their credentials are far below the norm and they had to work at a demanding full-time job at the same time.

I don't believe that student athletes are morally entitled to be paid for playing. If no one wants to pay to watch them, I have no objection. The reality, however, is that there is a high demand for their services which is being artificially suppressed by government coercion. Indeed, some schools and boosters pay players under the table despite the threat of severe NCAA sanctions if they get caught.

Another particularly galling element of the NCAA cartel system is the way in which it is surrounded by a veneer of righteousness. The NCAA has managed to persuade the media and most of the public that the real bad guys are actually those schools that try to undermine the cartel and pay their players at something more closely resembling market rates. Few people seem to care that most of the athletes who get shortchanged are poor minorities who are being deprived of a key opportunity to create a nest egg for their future. As [David] Henderson points out, only a small percentage of them go on to make big bucks in the pros.

There is a conceptually simple, though politically difficult, solution to this problem. The government should withdraw its support for the NCAA cartel. Universities will gradually stop pretending that Division I football and basketball players are primarily students, and start treating them as the employees they actually are. The players will get paid for their work, and they and the universities won't have to waste time and money forcing players to attend bogus classes in order to keep up appearances. Those who have the desire and academic credentials to do real coursework should of course be allowed to do so….

It's also worth noting that the same universities who loudly condemn the very thought of paying players often pay huge salaries to coaches and athletic administrators. I don't begrudge these people their riches. But it seems strange to claim that paying players any salary at all will somehow sully the academic ethos, while simultaneously contending that there's nothing wrong with paying big bucks to Mike Krzyzewski or Jerry Tarkanian.

If the Supreme Court rules against the NCAA, perhaps things will move in the direction I advocated. It is also possible that some universities will reconsider whether it is actually desirable for academic institutions to be so heavily involved in what are essentially professional sports.

UPDATE: It's perhaps worth noting that this is the second time in three years that the NCAA will have a major case before the Supreme Court. In 2018, the NCAA (along with the Trump administration and various professional sports leagues) was on the losing side in Murphy v. NCAA, a major victory for constitutional federalism and for sanctuary cities.