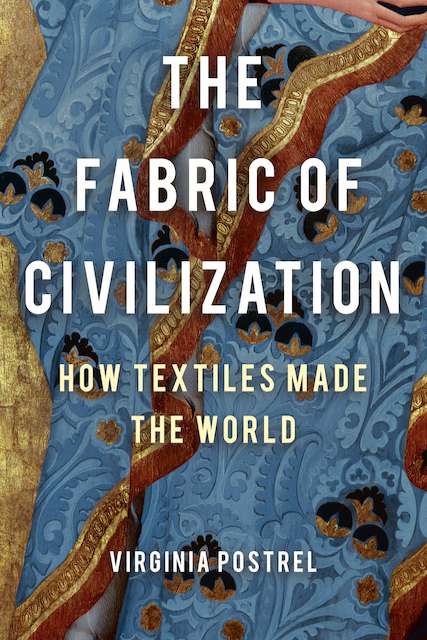 I was flattered but also surprised when Eugene Volokh kindly invited me to contribute a week of guest posts, since my new book, The Fabric of Civilization: How Textiles Made the World, is not about the law. It examines the central role textiles have played in the history of innovation, from pre-history to the near future. Fortunately, Eugene and his fellow conspirators are as guided by intellectual curiosity as by legal reasoning, and mixing it up, he assured me, would make the blog "fun and eclectic."

In this post, drawn from the book's introduction, I start with an insight from the influential computer scientist Mark Weiser, writing in 1991. "The most profound technologies are those that disappear," he wrote. "They weave themselves into the fabric of everyday life until they are indistinguishable from it."

Do you see what he did there?

We hairless apes co-evolved with our cloth. From the moment we're wrapped in a blanket at birth, we are surrounded by textiles. They cover our bodies, bedeck our beds, and carpet our floors. Textiles give us seatbelts and sofa cushions, tents and bath towels, bandages and duct tape. They are everywhere.

But, to reverse Arthur C. Clarke's famous adage about magic, any sufficiently familiar technology is indistinguishable from nature. It seems intuitive, obvious—so woven into the fabric of our lives that we take it for granted. We no more imagine a world without cloth than one without sunlight or rain.

We drag out heirloom metaphors—"on tenterhooks," "tow-headed," "frazzled"—with no idea that we're talking about fabric and fibers. We repeat threadbare clichés: "whole cloth," "hanging by a thread," "dyed in the wool." We catch airline shuttles, weave through traffic, follow comment threads. We speak of lifespans and spinoffs and never wonder why drawing out fibers and twirling them into thread looms so large in our language. Surrounded by textiles, we're largely oblivious to their existence, and to the knowledge and efforts embodied in every scrap of fabric.

Cloth-making is a creative act, analogous to other creative acts. It is a sign of mastery and refinement. "Can we expect, that a government will be well modelled by a people, who know not how to make a spinning-wheel, or to employ a loom to advantage?" wrote philosopher David Hume in 1742. The knowledge is all but universal. Rare is the people that does not spin or weave and rare, too, the society that does not engage in textile-related trade.

The global story of textiles illuminates the nature of civilization itself. I use this term not to imply moral superiority or the end state of an inevitable progression but in the more neutral sense suggested by Mordecai Kaplan's definition: "the accumulation of knowledge, skills, tools, arts, literatures, laws, religions and philosophies which stands between man and external nature, and which serves as a bulwark against the hostility of forces that would otherwise destroy him." This description captures two critical dimensions that together distinguish civilization from related concepts, such as culture.

First, civilization is cumulative. It exists in time, with today's version built on previous ones. A civilization ceases to exist when that continuity is broken. Minoan civilization disappeared. Conversely, a civilization may evolve over a long stretch of time while the cultures that make it up pass away or change irrevocably. The Western Europe of 1980 was radically different in its social mores, religious practices, material culture, political organization, technological resources, and scientific understanding from the Christendom of 1480, yet we recognize both as Western civilization.

The story of textiles demonstrates this cumulative quality. It lets us trace the progress and interactions of practical techniques and scientific theory: the cultivation of plants and breeding of animals, the spread of mechanical innovations and measurement standards, the recording and replication of patterns, the manipulation of chemicals. We can watch knowledge spread from one place to another, sometimes in written form but more often through human contact or the exchange of goods, and see civilizations become intertwined.

Second, civilization is a survival technology. It comprises the many artifacts—designed or evolved, tangible or intangible—that stand between vulnerable human beings and natural threats and that invest the world with meaning. Providing protection and adornment, textiles are themselves among such artifacts. So, too, are the innovations they inspire, from better seeds to weaving patterns to new ways of recording information.

Along with the perils and discomforts of indifferent nature, civilization protects us from the dangers posed by other humans. Ideally, it allows us to live in harmony. Eighteenth-century thinkers used the term to refer to the intellectual and artistic refinement, sociability, and peaceful interactions of the commercial city. But rare is the civilization that exists without organized violence. At best, civilization encourages cooperation, curbing humanity's violent urges; at worst, it unleashes them to conquer, pillage, and enslave. The history of textiles reveals both aspects.

Every scrap of cloth  represents the solution to innumerable difficult problems. Many are technical or scientific: How do you breed sheep with thick, white fleeces? How do you maintain enough tension to spin fibers together without breaking them? How do you prevent dyes from fading? How do you construct a loom that can weave complex patterns?

Some of the trickiest, however, are social: How do you finance a crop of silkworms or cotton, a new spinning mill, or a long-distance caravan? How do you record weaving patterns so someone else can duplicate them? How do you pay for textile shipments without physically sending currency? What do you do when the law forbids the cloth you want to make or use?

In the posts that follow, I'll concentrate on some of the institutions and practices—"social technologies"—that addressed these types of questions.