The United States Supreme Court conceals the names of lawyers that belong to the Supreme Court Bar. This lack of transparency is unusual and raises multiple concerns. If the Supreme Court fails to follow the example set by courts across the country and publicize its bar membership, then Congress ought to intervene.

Later, the essay concludes, "For the time being, the Supreme Court Bar's membership remains shrouded in secrecy."

For example, turn to page 649 of the October 2015 Journal. You will find the notation of my admission to the Supreme Court bar. (Zubik v. Burwell was argued that day). 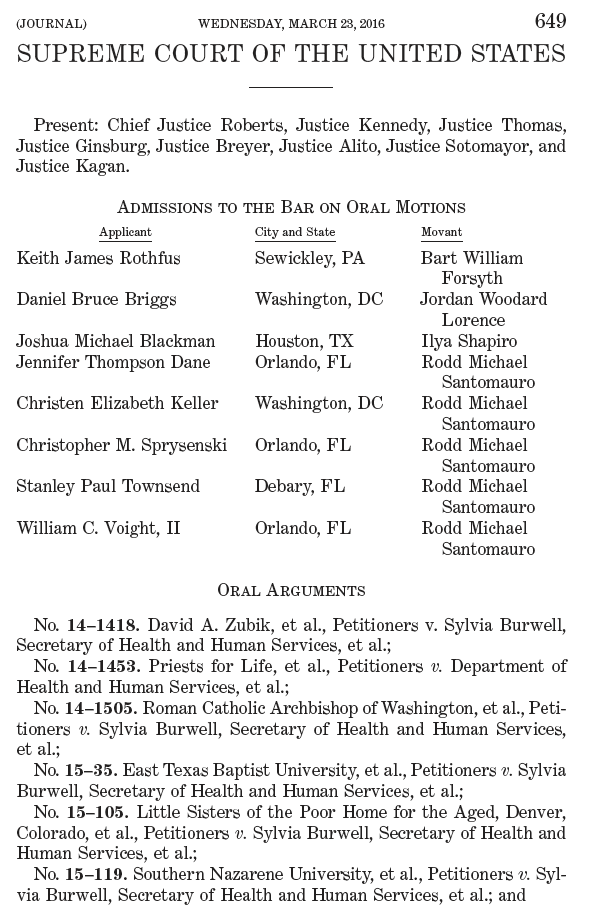 The Journal also indicates all members who are disbarred.

True enough, the Supreme Court does not have a searchable database of all members. And there is no easy way to determine whether members have passed away. But it is simply not true that the membership of the Court is "shrouded in secrecy."

Update: Yesterday I emailed the Georgetown Journal of Policy. The Online Editor promptly wrote back, and told me that the Author has made revisions to the essay. The piece now includes the follow two notes:

My thanks to Josh Blackman of the Volokh Conspiracy for noting that the Supreme Court Journal lists members of the Supreme Court Bar for the year in which they are admitted. While such measures are better than nothing, they fall far short of a best practice with regard to transparency and would actually make the creation of a searchable database similar to those documented in this article even easier for the Court to establish. Minor changes have been made for clarity and to address this valid point.

This article was originally published on November 28, 2020, and included an italicized dek at the beginning of the piece that was written by GPPR Online Editorial Staff. It inaccurately summarized the author's argument, and has been revised.

I appreciate that they made these corrections so quickly. The original version is preserved here.