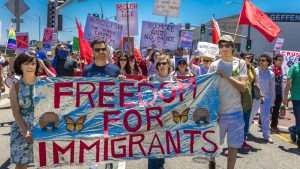 Earlier today, The Hill published my article on similarities between immigration restrictions and racial discrimination. Here's an excerpt:

On few if any issues was there a bigger contrast between the parties in the 2020 election than on immigration. President-elect Joe Biden has made it clear that he intends to reverse Donald Trump's highly anti-immigrant policies, including repealing his travel bans and greatly increasing the number of refugees allowed into the U.S. Race discrimination has likewise been a major focus of public debate, and Biden promises to make combatting it a major focus of his administration.

But the link between the two issues is often ignored. Exclusionary immigration policies are unjust for many of the same reasons as is racial discrimination by the state. Both restrict freedom and opportunity based on arbitrary circumstances of birth. And both have historic roots in bigotry…

Racial discrimination is a grave injustice because it penalizes people for a morally irrelevant characteristic over which they have no control. When racial segregation in the United States prevented black Americans from living where they wished, their liberty and opportunity was constrained based on an arbitrary trait determined by parentage. As Martin Luther King famously put it, people should "not be judged by the color of their skin, but by the content of their character…."

While most Americans condemn racial discrimination, it is much less widely recognized that our immigration restrictions violate the same principles. Like racial segregation, immigration law restricts where people live and work based on circumstances of birth….

Whether your parents were American citizens is just as much beyond your control as whether they were black or white. The same goes for whether you were born in the U.S. Neither trait says anything about the "content of your character…."

In many cases, immigration restrictions stifle liberty and opportunity even more than domestic racial discrimination. Many excluded migrants are consigned to a lifetime of poverty and oppression under the control of brutal regimes whose depredations go beyond those currently experienced by any American minority group.

Consider, for example, the fate of Cuban refugees forced to live under a totalitarian state, or Syrians forced to endure mass murder and terror….

[T]here should be a strong presumption against migration restrictions. Perhaps it can be overcome in situations where violating it is the only way to prevent some great harm. But, as with racial discrimination, a heavy burden of proof must be met before we consign people to oppression and poverty based on circumstances of birth.

I address many of the issues covered in the article in much greater detail in Chapters 5 and 6 my recent book Free to Move: Foot Voting, Migration, and Political Freedom. In that book, I also criticize claims that particular ethnic or racial groups are the "true" owners of various territories, and thereby entitled to exclude those with different backgrounds.