A grand jury has issued two indictments​ charging the Santa Clara County Undersheriff, a previously indicted sheriff's captain, a local business owner, and the head of Global Security for Apple, Inc. with bribery.

The defendants will be arraigned on January 11, 2021 at the Hall of Justice in San Jose. If convicted, the defendants could receive prison time.

The two-year investigation by the District Attorney's Office revealed that Undersheriff Sung, aided by Captain Jensen in one instance, held up the issuance of CCW licenses, refusing to release them until the applicants gave something of value.

In the case of four CCW licenses withheld from Apple employees, Undersheriff Sung and Cpt. Jensen managed to extract from Thomas Moyer a promise that Apple would donate iPads to the Sheriff's Office. The promised donation of 200 iPads worth close to $70,000 was scuttled at the eleventh hour just after August 2, 2019, when Sung and Moyer learned of the search warrant that the District Attorney's Office executed at the Sheriff's Office seizing all its CCW license records.

In the case of the CCW license withheld from Harpreet Chadha, Sung managed to extract from Chadha a promise of $6,000 worth of luxury box seat tickets to a San Jose Sharks hockey game at the SAP Center on Valentine's Day 2019. Sheriff Laurie Smith's family members and some of her biggest political supporters held a small celebration of her re-election as Sheriff in the suite.

The various fees required to obtain a CCW license generally total between $200 and $400. Under state law, it is a crime to carry a concealed firearm without a CCW license. Although state law requires that the applicant demonstrate "good cause" for the license, in addition to completing a firearms course and having good moral character, the sheriff has broad discretion in determining who should qualify.

The may-issue states today are California, Connecticut, Delaware, Hawaii, Maryland, Massachusetts, New Jersey, New York, and Rhode Island (though I've heard mixed things on just how available permits are in Connecticut, Delaware, and Rhode Island). In 1986, this roughly 80%-20% split in favor of broad concealed carry rights was roughly 80%-20% in the opposite direction; one of the key gun control stories of the last 35 years has been the decontrol of concealed carry. Here is the Wikipedia map of the rules as of 2019, county-by-county; it seems generally right, though I can't speak for all the details: 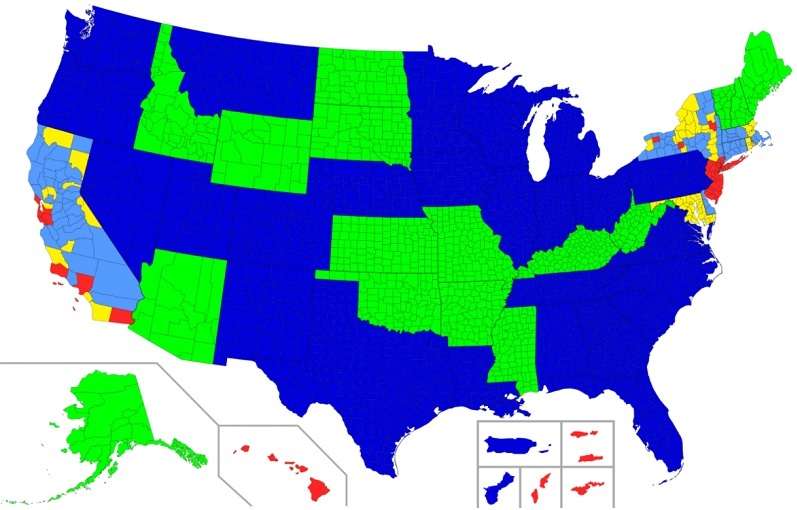 ("Constitutional carry" refers to concealed carry being allowed without a license; shall-issue refers to a regime where law enforcement is required to issue a license so long as the recipient is a law-abiding adult who satisfies some largely objective criteria.)