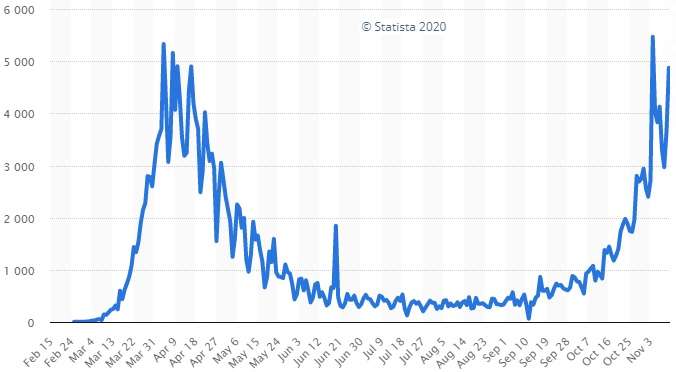 You can see the original here on the Statista site, which I much recommend for this. The surge is a mix of a second wave in some Western European countries (e.g., Belgium, Spain, France, UK, Italy) and a first wave in some Eastern/East-Central European countries (e.g., Czechia, Hungary, Poland, Bulgaria, Romania). Indeed, some countries which had a relatively mild first wave (Austria, Switzerland, Portugal) are now having more deaths per day in the second wave than in the first.

At this point, the per-capita death coronavirus rate over the last several days in Europe as a whole appears to be materially higher than in the U.S.; this is particularly striking, for instance, in the larger Western European countries that had already experienced the first wave (I include here just countries with population of 10M or above), though it's even more visible in some of the first-wave Eastern countries:

But the U.S. death rate may yet be on the way up as well (given the increase in U.S. cases over the last few weeks).