Reason is supported by:
Dave Mamer 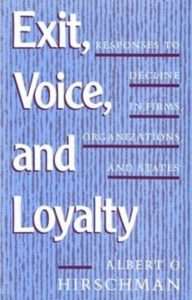 The Cato Unbound  symposium on the 50th anniversary of economist Albert O. Hirschman's classic work, Exit, Voice, and Loyalty: Responses to Decline in Firms, Organizations, and States now has multiple additional contributions. Mercatus Center scholar Adam Thierer, author of the lead essay, has now posted a response to the three commentators, including pieces by, sociologist Mikayla Novak, Max Borders, and myself. Borders' commentary itself was posted only recently.

Here's an excerpt from Thierer's reply:

The response essays by Mikayla Novak, Ilya Somin, and Max Borders demonstrate the continuing relevance of Albert Hirschman's Exit, Voice, and Loyalty fifty years after its publication. Each author makes important contributions to a better understanding of what Hirschman's book—and each of the terms in its title—mean today.

Somin stresses "the continuing importance of physical freedom of movement" in ensuring that our rights our honored. "No technological innovation provides an adequate substitute for the power to 'vote with your feet' by choosing where to live and work." Somin's latest book, Free to Move: Foot Voting, Migration and Political Freedom, drives that point home powerfully.

I agree wholeheartedly that we must never ignore the physical component of the exit equation. In fact, in an essay earlier this year, I made "The Case for Sanctuary Cities in Many Different Contexts," as "a way to encourage experiments in alternative governance models and just let people live lives of their choosing." In theory, sanctuaries can help advance exactly the sort of foot voting Somin desires. Unfortunately, today's sanctuary movements are quite one-dimensional, focusing exclusively on single causes like immigrant rights, gun rights, or marijuana decontrol. Worse yet, selective morality runs deep when it comes to the support they garner…

Consistent with what Somin advocates in his essay and recent book, I believe there is a profoundly positive case for embracing sanctuaries and the free movement of people among them regardless of what the cause is. Greater localized decisionmaking, policy experimentation, and alternative governance arrangements have value in and of themselves. The question is whether sanctuaries can scale and become a more meaningful and lasting form of exit to help us capitalize on the dream Somin and I both share….

Max Borders calls me out for adopting this more incrementalist approach. Borders is distressed that I am even willing to entertain the idea of seeking small victories when we should be swinging for the fences instead…

Jefferson's call for a rebellious spirit and periodic resets of government has long animated my life's work, but, as I noted I my opening essay, "repeated revolutionary acts… would be difficult to accomplish and certainly highly disruptive to society and economy alike." Borders prefers we go further, so much so that his essay raises the question whether we should have any loyalty whatsoever to our current constitutional order. Alas, he shies away from discussing just how far we should go, preferring instead to merely say that we need to be "constructive revolutionaries, accelerating those innovations most likely to undermine the apparatuses of state power."

As can be seen from this excerpt, Thierer has more disagreements with Max Borders than with the other two commentators. I actually agree with most of what Thierer says in the response essay, including his reply to Borders, and most of his comments on sanctuary jurisdictions.

I myself have written extensively about immigration sanctuary cities (e.g. here and here). I am even one of the relatively few people who is sympathetic to both liberal immigration sanctuaries and conservative gun rights sanctuaries. Thierer is right that there is a good deal of inconsistency and "selective morality" in the discourse over sanctuary cities. But even hypocritical sanctuary movements can still provide valuable foot-voting options, and protect people against overreaching federal government policies.

I will likely have more to say in further comments at the Cato Unbound website, as the symposium continues. Stay tuned!