As alleged in the complaint, Ms. Clifford began an intimate relationship with Mr. Trump in 2006. Five years later, in 2011, Ms. Clifford agreed to cooperate with a magazine that intended to publish a story about the relationship. Ms. Clifford alleges that a few weeks after she agreed to assist with the magazine story, she was approached by an unknown man in a Las Vegas parking lot who told her "Leave Trump alone. Forget the story," and threatened that harm would come to her if she continued to cooperate with the magazine. Ultimately, the story was not published.

In 2018, after Mr. Trump became President, Ms. Clifford went public with her account of this incident. With the assistance of a sketch artist, she prepared a composite sketch of the man from the parking lot, which was disseminated publicly.

Ms. Clifford's defamation claim is based on a tweet Mr. Trump published about the composite sketch. Shortly after the sketch was released, a Twitter user unrelated to the parties here tweeted the sketch juxtaposed with a photograph of Ms. Clifford's ex-husband, with a mocking message suggesting that the two men resembled one another. Mr. Trump retweeted this tweet, adding his own message: "A sketch years later about a nonexistent man. A total con job, playing the Fake News Media for Fools (but they know it)!"

The two tweets appeared together as depicted below: 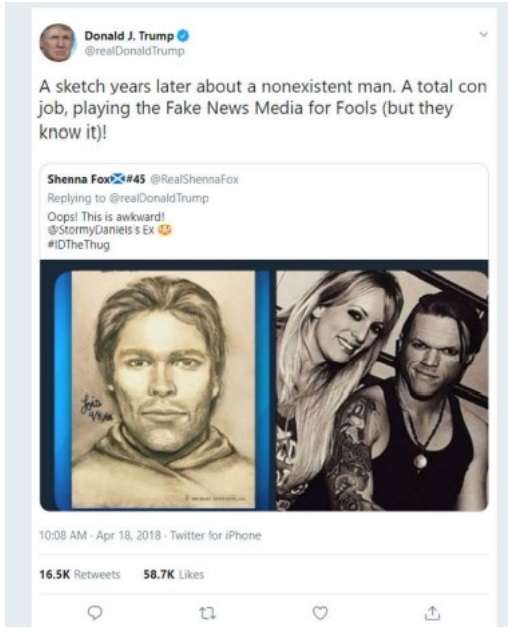 "[S]tatements that are not verifiable as false are not defamatory. And even when a statement is verifiable, it cannot give rise to liability if the entire context in which it was made discloses that it was not intended to assert a fact." … [S]tatements that fail either test—"verifiability or context"—[are treated] as "opinion[s]." The determination of whether a statement is "reasonably capable of a defamatory meaning" focuses on how the statement would be interpreted by an "objectively reasonable reader."

Ms. Clifford advances two arguments for why the tweet at issue is defamatory. First, citing the Black's Law Dictionary definition of "confidence man," she argues that the use of the term "con job" implied that she had literally committed the crime of fraud. But it would be clear to a reasonable reader that the tweet was not accusing Clifford of actually committing criminal activity. Instead, as used in this context, the term "con job" could not be interpreted as anything more than a colorful expression of rhetorical hyperbole. Greenbelt Coop. Publ'g Ass'n v. Bresler (1970) (description of the plaintiff's negotiating position as "blackmail" could not reasonably be interpreted as having accused him of committing the crime of blackmail)….

Next, Ms. Clifford argues that the tweet is defamatory because it accused her of lying about having been threatened because of her participation in a magazine story about her relationship with Mr. Trump. We agree that this is a reasonable interpretation of the tweet, but conclude that it is not actionable.

Under Texas law [which applies to this case, presumably because Daniels is a Texas resident], a statement that merely interprets disclosed facts is an opinion, and, as noted, statements of opinion cannot form the basis of a defamation claim.. Viewed through the eyes of an objectively reasonable reader, the tweet here reflects Mr. Trump's opinion about the implications of the allegedly similar appearances of Ms. Clifford's ex-husband and the man in the sketch. Mr. Trump's reference to a "sketch years later of a nonexistent man" signals that the allegedly defamatory conclusion that followed—that Ms. Clifford was pulling a "con job" and "playing the Fake News Media for Fools"—plainly concerns the similarities between the sketch and the photograph of Ms. Clifford's ex-husband.

Because the tweet juxtaposing the two images was displayed immediately below Mr. Trump's tweet, the reader was provided with the information underlying the allegedly defamatory statement and was free to draw his or her own conclusions. Moreover, the tweet does not imply any undisclosed facts. Accordingly, the tweet, read in context, was a non-actionable statement of opinion. … "[T]here is no defamation liability for a statement of opinion when a report sets out the underlying facts in the publication itself, thereby allowing the listener to evaluate the facts and either accept or reject the opinion." …

Resisting this conclusion, Ms. Clifford argues that the tweet is reasonably construed as disputing not only her account of having been threatened over her cooperation with the magazine but also her broader allegation that she had an intimate relationship with Mr. Trump. Construed this way, Ms. Clifford contends that the tweet is actionable because a reasonable reader would appreciate that Mr. Trump had personal knowledge about whether there had in fact been a relationship, such that the tweet would be understood as a statement, based on undisclosed facts, that Ms. Clifford had fabricated her account of the relationship. We find this argument unpersuasive.

As an initial matter, in evaluating whether Ms. Clifford adequately pleaded a defamation claim, we are limited to the allegations in the complaint. The operative complaint specifically alleges that Mr. Trump's tweet was defamatory because it "falsely attack[ed] the veracity of Ms. Clifford's account of the threatening incident that took place in 2011." …

More importantly, even if this theory had been properly presented, we do not believe the tweet could be reasonably read as addressing Ms. Clifford's account of her relationship with Mr. Trump. The tweet did not reference the alleged relationship and instead focused on the sketch of the ostensibly "nonexistent man." This was plainly a reference to Ms. Clifford's account of having been threatened by a man in a Las Vegas parking lot. It follows that the statement in the following sentence that Ms. Clifford was pulling a "con job" and "playing the Fake News Media for Fools" was referring to her account of that same incident, not more broadly to other, unreferenced, statements by Ms. Clifford about the alleged relationship.

Because the complaint failed to plead an actionable false statement, the district court correctly granted the motion to dismiss.

Seems right to me.