[T]he self-proclaimed leader … host[ed] the Bowl Cast, a podcast spewing hateful rhetoric and language … [and has been] identified … as … Andrew Casarez….

"For a little over three weeks our detectives, along with multiple federal agencies, have been looking into Andrew Casarez," sheriff's office spokesperson Lacey Nelson said….

"We're able to obtain a gun violence restraining order against him and a search warrant, and a firearm was seized," Nelson said.

"This search warrant it's the first of its kind at least in the country. As far as how we obtained it and were able to serve it," Nelson said. "He was posting enough racist rhetoric and propaganda on Facebook that it was concerning that his behaviors could become violent in retaliation." …

As for the FBI, they don't police ideology. They will only take action if a person threatens violence or actually commits a crime. But the Sacramento County Sheriff's Office wasn't willing to wait.

"Instead of waiting for him to go out and commit acts of violence, per se, they were able to ideally stop it before it started. But he did have a firearm in his possession," Nelson said….

If Casarez was actually involved in specific acts of violence, or conspired to commit violence, or solicited specific acts of violence against particular people, he could certainly be arrested for those crimes (again, whether the completed crimes, or conspiracy or solicitation, which are themselves crimes). His gun could then potentially be seized, either if they were evidence or perhaps as a condition of pretrial release; and some courts have upheld restrictions on gun possession by people who are under indictment, especially if there is some specific reason to be concerned that the person will use the guns illegally. And the TV segment in the story above suggests that Casarez had mentioned that some particular (bleeped-out) person "still deserves to be raped and murdered," which might in context justify at least a search and perhaps a charge for solicitation of crime (though it all depends on exactly what Casarez was said, which isn't clear).

But nothing in the quoted statements from Sheriff's Office officials suggests that the "gun violence restraining order" and gun seizure stemmed from any crime he had committed (including conspiracy or solicitation); it sounds like the basis for the "gun violence restraining order" is his political rhetoric. I found online what is claimed to be an excerpt from the application for the order, though I can't vouch for its authenticity (I'm trying to get the court file myself): 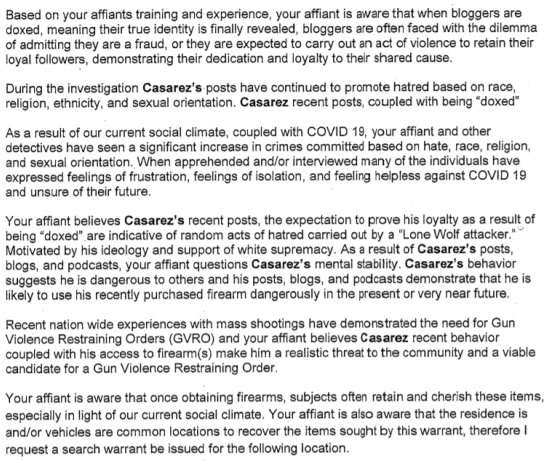 And while it does lay out a specific theory as to why he is likely to commit violence, I don't think this can be enough. A person's hateful and pro-violence rhetoric—whether it's hatred for blacks and Jews, as Casarez seems to espouse, or for police officers or capitalists or government officials—is by itself the exercise of First Amendment rights, and the government can't retaliate against such speech by using it as a basis to deny Second Amendment rights. While the government can use speech as evidence of what one has done or why one has done it (a common use in criminal procedures), I don't think it can use it as evidence of future dangerousness sufficient to deny someone a constitutional right.

In any case, I look forward to blogging about the gun violence restraining order file when I get it, and updating my analysis as necessary; please keep me in mind that what I've written above is based on the limited information I now have.

UPDATE: A commenter pointed to what purports to be the gun prohibition order; the law enforcement declaration says,

I continue to be skeptical that this speculation based on Casarez's speech is sufficient to justify the restraint on his constitutional rights. (If he actually had attempted or conspired to violate California gun laws related to the AR-15, then they can prosecute him for that, but I note they don't seem to have done that.)