It's no secret to readers of the Volokh Conspiracy, nor to readers of our host site Reason.com, that the American criminal justice is in dire need of reform. Police are generally unaccountable for misbehavior (which, among other things allows a small number of sociopaths to consistently engage in excessive force), militarization of local police forces creates opportunities for excessive use of force, no-knock raids create all sorts of problems leading to all sorts of abuses, the drug war has been a disaster for civil liberties, coercive tactics by prosecutors lead the innocent to plead guilty to "lesser charges" to avoid total ruin, and so on. Even in the absence of racism, these problems would fall more heavily on the poor and those living on the margins of society, a population that is disproportionately African American. The presence of racism makes matters worse for them.

All that said, we rely on the media to inform us about these issues, but instead we get a preconceived narrative, as illustrated by the graphic from the Washington Post, below. I take it that readers are supposed to look at this graphic, be outraged at the disparities, and then draw whatever conclusions may follow.

But, assuming these statistics are correct, we can in fact parse them in ways that make us think more deeply about what they mean and why they are presented this way.

First, note that over a five year period, 1,262 Blacks, 887 Hispanics, and 2412 Whites were shot to death by police. In aggregate, that's a lot of people, and we should hope (and perhaps demand) that cops can be trained to use non-lethal force more often in many situations in which they feel threatened. Police in other countries seem to manage it. On the other hand, I've heard a great deal of rhetoric over the past week to the effect that police officers are basically just looking for black men to hunt down, and that there is a decent chance that any encounter between the police and a black man will result in the black man's death. That is simply not borne out by the data (even if we note that some smaller number of deaths from police violence are not from shootings). Looking just at deadly shootings, black men get arrested two million times or so each year.  Many millions more times, police have other adversarial encounters with black men, such as traffic stops, or confrontations that don't lead to arrest. A tiny percentage of those encounters lead to deadly shootings, and in some fraction of those, the police use of force was justified by the threat faced by the officer. So the odds of an unjustified deadly shooting of a black man in a confrontation with police in any given instance is tiny.

Don't get me wrong. EVERY SINGLE unjustified police shooting is a horrible crime, which not only may steal the victim's life but tears at the fabric of society. But the notion that police are generally trigger happy and shooting to death anyone in sight, especially if he is black? The data don't support even a moderate version of that rhetoric.

I'm also not arguing that there is not a serious problem with routine excessive use of force by some police officers and perhaps some entire departments. But the data suggest that "police brutality" rarely takes the form of shooting to kill, and is much more likely to be "routine," non-deadly force.

Second, the number of whites shot and killed by police is surprisingly high, at least if one has assimilated the rhetoric out there. African Americans are getting shot disproportionately often compared to whites on a per capita basis, but if you look at arrest data, you see that African Americans are arrested for violent crime much more often per capita than whites. This creates more opportunities for confrontations between violent criminals and the police, and undoubtedly explains at least some of the disparity.

Even if there were no disparity once arrest rates were taken into account, that would not necessarily be evidence that racism does not cause fatal shootings. Just for example, African American deaths may be concentrated in big cities, where the police have better equipment and are better trained than in small rural sheriff's departments. Better training and equipment should lead to fewer shootings. African Americans may also be less confrontational with police as they are more likely to expect to be subject to violence if they don't cooperate, which should also lead to fewer shootings.

Regardless, what the data show is that to the extent the police are using excessive force in shootings, they are doing so against whites (and Hispanics) as well, so even if it's more of a problem for African Americans, it's not solely a problem for African Americans. Eliminating racism, in short, would still leave the U.S. with far more deaths from police shootings than seems reasonable.

Third (and this is what struck me the most), the Post could hardly be more transparent about the narrative it's trying to push. The graphic shows that blacks are shot to death by police more than Hispanics who are shot more than Whites who are shot much more often than… "other". Other is about 49 million people, which would include about 21 million Asian Americans, who likely have an even lower rate of being shot to death by police than the full "other" category. But if you are trying to frame the narrative as an uncomplicated "cops shoot people of color more than whites" you can't actually break out "Asians" because that undermines the narrative and means you have to dig a bit beyond the simple formula.

This reminds me of Justice Sotomayor's dissent in the BAMN case, in which she provided statistics purporting to show that affirmative action was needed to ensure educational attainment for "racial minorities," but she excluded Asian Americans (who can at least in some sense be considered a "racial minority") but included Hispanics, who can be of any race (and about half of whom consider themselves to be white). It's understandable if a story wants to highlight black-white differences, for obvious historical reasons. But whenever you see someone include Hispanics as a "minority" category, but exclude Asians, you know there is a political or ideological agenda behind it. 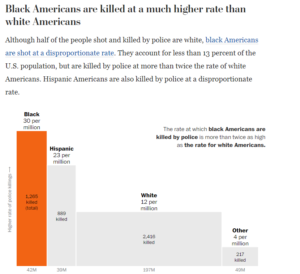 Abortion Rights Under the 9th and 14th Amendments