In State v. Anonymous (1976-8), 6 Conn. Cir. Ct. 751, 360 A.2d 909 (App. Div. 1974), the defendant had been convicted under a statute with the heading "Breach of the peace. Intimidation. Libel", which forbade anyone from "disturb[ing] or break[ing] the peace … or writ[ing] or print[ing] and publicly exhibit[ing] or distribut[ing] … any offensive, indecent or abusive matter concerning any person." The matter was this: 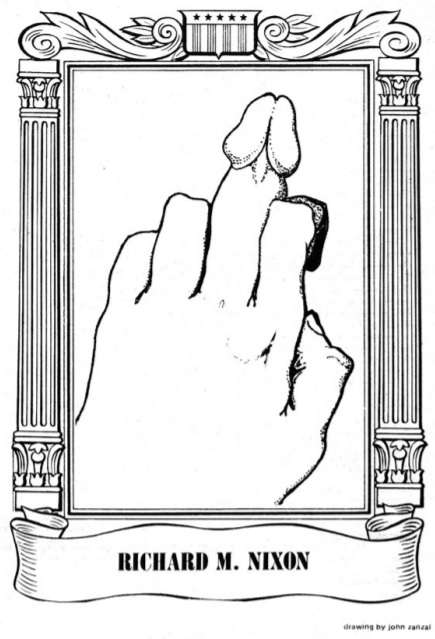 The court "decline[d] to reach the very significant constitutional questions raised" by the prosecution, because it reversed the conviction on the following (constitutional-ish) grounds:

The theory of criminal libel ever since De Libellis Famosis (1609), has been that the government has the right to punish certain utterances because they inevitably lead to breaches of the peace. 'Any publication which has a tendency to disturb the public peace or good order of society is a libel by the common law, and is indictable as such.' It is clear that the tendency of the utterance to create breach of the peace is at least nominally the basis of the crime. The crime is not defined in terms of its tendency to create violence and its possible effect on the public; rather, it is formulated in terms of the substantial character of the utterance, the assumption being that, given certain speech, violence may be conclusively presumed to result.

With the passage of [time], however, there has been an effort to expand and alter somewhat the original, narrow meaning of criminal libel. The emphasis is no longer on the effect of the libel on the public peace, but on the tendency of the publication to damage the individual. Thus, focus has shifted from the tendency of the utterance to create disorder to its tendency to harm individual reputation….

[U]nlike the few reported cases involving libel by means of political cartoons the drawing in this case bore no caption or other graphic display from which any inference of fact might possible be drawn….

Judge Learned Hand recognized this [rare] type of libel in Burton v. Crowell Publishing Co. (2d Cir.). There the publication of a picture which held the plaintiff up to ridicule was ruled actionable notwithstanding the fact that the picture did not assume to state a fact or an opinion. In coming to that conclusion, Judge Hand observed that defamation was not a favored cause to action at common law and that any "excuse" pleaded by the defendant might defeat recovery…. That there is a countervailing interest and, hence, an excuse in this case is clear from the opinion of the United States Supreme Court in New York Times Co. v. Sullivan (1964), wherein it was observed: "(W)e consider this case against the background of a profound national commitment to the principle that debate on public issues should be uninhibited, robust, and wide-open, and that it may well include vehement, caustic, and sometimes unpleasantly sharp attacks on government and public officials."

In holding that an Alabama police commissioner could not recover damages from the New York Times for a partially false and allegedly defamatory editorial advertisement appearing in the newspaper, the court formulated what has come to be called the New York Times rule: "The constitutional guarantees require … a federal rule that prohibits a public official from recovering damages for a defamatory falsehood relating to his official conduct unless he proves that the statement was made with 'actual malice'—that is, with knowledge that it was false or with reckless disregard of whether it was false or not."…

Since the publication of the drawing here directed at a presidential candidate involved comment on a public official within the meaning of New York Times and Garrison v. Louisiana (1964) [which applied the New York Times rule to criminal libel cases], we hold that the defendant was cloaked with the limited privilege recognized by those decisions. Applying the standard enunciated in those cases, … we further hold that the state has the burden of proving that the defendant was in fact actuated by malice toward the target of his publication. It was error for the trial court to rule that malice could be implied from the fact of publication.

In deciding this case as we do today, we are not unmindful of the unpopular and distasteful actions which have been, and will continue to be, immunized by the constitutional guarantees of freedom of speech and the press. Along with Mr. Justice Harlan, however, we measure the survival and success of liberty, in part, by the diversity of opinions and modes of expression entertained by our citizens and fostered by our constitution: "To many, the immediate consequence of this freedom may often appear to be only verbal tumult, discord, and even offensive utterance. These are, however, within established limits, in truth necessary side effects of the broader enduring values which the process of open debate permits us to achieve. That the air may at times seem filled with verbal cacophony is, in this sense not a sign of weakness but of strength. We cannot lose sight of the fact that, in what otherwise might seem a trifling and annoying instance of individual distasteful abuse of a privilege, these fundamental societal values are truly implicated. That is why '(w)holly neutral futilities … come under the protection of free speech as fully as do Keats' poems or Donne's sermons,' and why 'so long as the means are peaceful, the communication need not meet standards of acceptability.'"

It was incumbent upon the state to prove actual malice in order to sustain a conviction for criminal libel; we are forbidden by the New York Times rule to hold that malice may be implied from the mere fact that the drawing was published, however, crude and vulgar the characterization may be.

The constitutional analysis strikes me as a bit perplexing: How could the government prove "actual malice" in the New York Times sense of knowledge or recklessness as to factual falsehood when the cartoon contains nothing "from which any inference of fact might possible be drawn"? It seems to me easier to say that the cartoon is pure opinion, and thus constitutionally protected against libel liability.

But perhaps this stems from the era in which the case was decided. Until not so long ago, any damage to reputation was potentially libelous, unless certain privileges were shown—truth was often a privilege, as was "fair comment," which covered certain kinds of opinions, but if a privilege was unavailable, even some true statements or statements of opinion could be criminal libel if they damages a person's reputation. Now, "a statement on matters of public concern must be provable as false before there can be liability under state defamation law," so opinions are categorically immune. In any event, the conviction for the Nixon cartoon was invalidated in 1974, and it would surely be invalidated today.

You can read more about the case here and here.

L.A. Schools Will Require Non-Cloth Masks (Even for Sports) and Vaccination Next Year