Imagine if, at a Q & A with Donald Trump, someone got up and said, "As an American Jew I am terrified at the unholy alliance the ADL is forming with racist black activists, open borders extremists, Socialists and Communists, and no Republican should legitimize that type of anti-American globalist bigotry, and I'm wondering whether you will commit to boycotting it?" And Trump in response nodded agreeably and said yes. Now watch this clip with Elizabeth Warren regarding AIPAC, which involves at least equally inflammatory and tendentious allegations. Note that AIPAC has a huge membership for an American Jewish organization of over 100,000, primarily Jews, and is, within the Jewish community, utterly mainstream, though of course (like the ADL, though AIPAC is much more bipartisan and centrist) it has critics both left and right.

[UPDATE: Please note that I have been very critical of the ADL in the past, and I'm not much of a fan of AIPAC. There is nothing wrong with criticizing either organization. But to suggest, as the questioner did, and as Warren nodded along with, that a mainstream Jewish organization is not just wrong on its policies beyond the pale of respectability because it is purportedly promoting 'bigotry' and allying with white nationalists is basically the leftist equivalent of right-wing nuts like the Pittsburgh murders who believe that Jewish organization are responsible for undermining white America.]

Like many of her other extremist positions, Warren has come to this distaste for AIPAC rather late. I suppose she's jealous that Bernie is cornering the leftist anti-Semite vote. 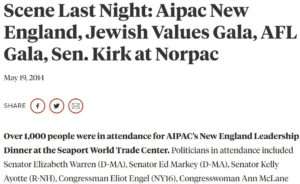 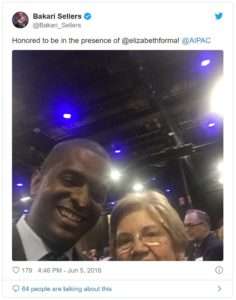