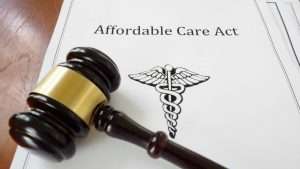 It has largely gone unnoticed thanks to the impeachment news. But, on Wednesday, a closely divided US Court of Appeals for the Firth Circuit voted against en banc review of the December panel decision in the Obamacare severability case. The court voted against en banc reconsideration by a closely divided 8-6 margin. The official order is here. Had the vote gone the other way, the case would have been reconsidered by the full Fifth Circuit.

The case involves a lawsuit filed by twenty Republican "red" state governments arguing that the Obamacare individual health insurance mandate (which requires most Americans to buy government-approved health insurance) is now unconstitutional because the December 2017 tax reform law enacted by the then-GOP controlled Congress zeroed out the monetary fine imposed on violators, thereby making it impossible for the mandate to be considered a tax any longer (the theory that it could be so considered was the only basis on which the Supreme Court upheld the mandate in NFIB v. Sebelius (2012)). More controversially—and with much greater practical significance—the plaintiff states argue that the rest of the Affordable Care Act must fall along with the now-largely neutered mandate, because the remainder of the Act cannot be "severed" from the unconstitutional part.

In December 2018, Federal District Judge Reed O'Connor issued a ruling agreeing with the plaintiffs on both issues. Last month, a divided three-judge panel of the Fifth Circuit upheld his ruling on the issue of the constitutionality of the mandate, but remanded the severability issue back to the trial court for further consideration—in the process expressing considerable dissatisfaction with with O'Connor's ruling. I assessed O'Connor's ruling here, and the Fifth Circuit panel decision here. For reasons explained in those posts, I agree with the plaintiffs on the issue of the unconstitutionality of the penalty-less mandate (which is a more important issue than most people seem to think), but differ with them on the question of severability.

To me, it makes no sense to conclude that a largely-toothless mandate is so essential to the overall structure of Obamacare that Congress could not have intended the broader law to continue functioning without it. Along with a cross-ideological group of other legal scholars, co-blogger Jonathan Adler and I developed this argument in greater detail in two amicus briefs we have filed in this case (see here and here).

This position is not driven by any great love for Obamacare.  I authored an amicus brief against the Obamacare individual mandate in the initial 2011-12 challenge to its constitutionality, and also wrote a coauthored book and various articles arguing that it and some other parts of the law are unconstitutional. I would be  more than happy to see the ACA repealed.

The Fifth Circuit's decision to deny en banc consideration is not all that surprising. Neither the majority nor the dissenting judges provided any explanation for their votes (which is not unusual in such cases). But it would be unusual to take a case en banc when the three-judge panel has not even conclusively resolved the biggest issue involved (in this case, severability).

Still, the close division suggests something more may be going on. It's possible the judges differ because some believe it is important to provide a quick resolution to this case (thereby eliminating uncertainty about the future of the ACA), while others are more inclined to follow normal procedures. Obviously, those supporting en banc rehearing may also take a dimmer view of the substance of the panel decision than those opposing it.

It is also notable that all eight judges voting against en banc review were Republican appointees. By contrast, five of the six judges voting in favor were appointed by Democratic presidents.

The one GOP-appointed judge who voted for en banc review was Judge Jerry E. Smith, who was appointed by Ronald Reagan. It so happens I clerked for Judge Smith in 2001-02. But, in case any members of the media happen to read this post, I hasten to add that I have not discussed this case with Judge Smith (it would have been inappropriate to do so), nor do I have any inside information on why he voted the way he did. I do not even know whether he has read any of my writings about the case, and—if so—whether he agrees with anything I said.

Thus, I cannot say whether Judge Smith supported en banc review because he 1) differs with the panel majority on the constitutionality of the mandate, 2) differs on severability, 3) just thinks it important to resolve the case as fast as possible, or 4) some combination of more than one of these reasons. It's even possible it could be some reason I have not thought of. If I had to guess, I would say that scenarios 2 and 3 (or some combination thereof) are probably more likely than 1, but that is no more than speculation.

The views of the Fifth Circuit judges who voted on the en banc issue could turn out to be important when this case returns to the appellate level, which could easily happen later this year. At that time, there may again be attempts to force en banc review of whatever decision the panel makes.

In the meantime, a group of blue states that have intervened to defend the ACA when the Trump administration declined to do so, have tried to get the Supreme Court to take the case as soon as possible, without waiting for further lower court decisions. But that effort has not fared well so far, and it is unlikely the Court will consider the case before the end of the year. The blue states clearly want a quick Supreme Court decision, and they sought to go directly there. The vote on en banc review was at the behest of one of the Fifth Circuit's own judges, not any of the parties to the case.

For the moment, it looks like the wheels of justice will keep grinding in this case for some time to come. But it is entirely possible we will have additional rulings before the November election, so the issue may not be out of the public eye for long.