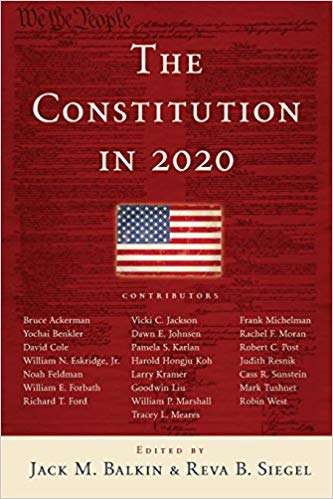 October 2009 was a very constitutional universe. Boumediene v. Bush and District of Columbia v. Heller were barely a year old. The legal challenges to Proposition 8 were in their early stages. NAMUDNO v. Holder suggested that the Voting Rights Act was in jeopardy. Justice Sotomayor was now confirmed to the Supreme Court, and Solicitor General Kagan had recently argued Citizens United. The Affordable Care Act was winding its way through Congress, and rumblings about the individual mandate's constitutionality began to form. We are in a very different place a decade later.

The book offered what it called "powerful blueprint for implementing a more progressive vision of constitutional law." I am generally skeptical of any long-term strategies, especially when the courts are involved. I critiqued Chief Justice Roberts's so-called "long game" in the wake of Justice Scalia's passing:

The Supreme Court does not exist in a vacuum, where stasis is maintained. Everything changes. Even if the Chief Justice has a broad vision of what he wants to accomplish, had President Clinton appointed three new Justices, all of those plans would have vanished instantly. His first decade of planning and calculating would have been for naught, and the Chief Justice would have been in dissent for a generation. Even if a Republican President appoints two or three Justices, there is no way for Roberts to know how they'll vote. Maybe those Justices will also have a different master plan, and will not agree with the Chief's plan. Or maybe the nominee will turn out to be another Souter or Stevens. Or what if the plan falls apart much sooner? Justice Scalia's unexpected death brings this entropy into focus.

I hope to write more this year about how the Constitution in 2020's blueprint fared over the past decade.

Did These Three Officers 'Willfully' Deprive George Floyd of His Constitutional Rights?