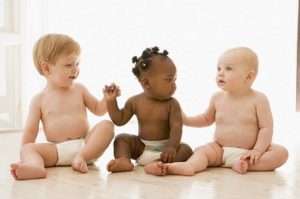 A  gay couple recently filed a lawsuit challenging the legality of a State Department policy that denies automatic citizenship to children of married US-citizen same-sex parents born abroad (in this case through a surrogacy arrangement):

Derek Mize and Jonathan Gregg, who married in New York in 2015, had their daughter Simone Mize-Gregg via surrogacy in England in 2018, their lawyer said in a statement. Both fathers are listed on the birth certificate.

When they applied for Simone's US citizenship, the US consulate in London rejected their application… "The Immigration and Nationality Act (INA) states that children of married U.S. citizens born abroad are U.S. citizens from birth so long as one of their parents has lived in the U.S. at some point, but the State Department routinely denies that right to same-sex couples and their children," the statement says.

"The State Department's policy is not only cruel, it is unconstitutional. The government refuses to recognize Jonathan and Derek's marriage and all of Simone's rights as a U.S. citizen," Aaron C. Morris, one of the couple's attorneys and executive director of Immigration Equality, said…..

The lawsuit says that, "Because she is the child of two men, the U.S. Department of State evaluated Simone's citizenship under the standards only applicable to children 'born out of wedlock' and refused to recognize Simone's U.S. citizenship."

The full text of the complaint filed by Mize and Gregg's counsel is available here. It argues that the State Department policy violates both the Immigration and Nationality Act (which does not, in its text, distinguish between same-sex and opposite-sex marriages), and the Constitution.

Meanwhile, the State Department has adopted the absurd position that the baby is only eligible for a tourist visa, and therefore can only stay in the US for 90 days at a time. If the child is forced to leave the country, she will be separated from at least one of her parents, as he cannot leave the US due to the need for ongoing treatment for a brain tumor.

Simone might have qualified for US citizenship even under the rules for children "born out of wedlock." But in such cases, the law mandates that the biological US-citizen parent must have lived in the US for five consecutive years, and Jonathan Gregg was one year short.

The plaintiffs here are absolutely right that the State Department's policy is both cruel and unconstitutional. In  Sessions v. Morales-Santana (2017), the Supreme Court struck down a law that made it easier for foreign-born children of unwed US-citizen mothers to acquire citizenship than foreign-born children of unwed citizen fathers. The Court  emphasized that "Laws granting or denying benefits 'on the basis of the sex of the qualifying parent…'  differentiate on the basis of gender, and therefore attract heightened review under the Constitution's equal protection guarantee." It also concluded that the law in question could not possibly pass heightened scrutiny, because the sex discrimination it imposes does not substantially advance any important government interest.

The same reasoning applies to the State Department policy on children of same-sex parents. Here too, the government discriminates based on the sex of the parents in question. If both are the same sex, they are treated differently than if they are not. And, here too, there is no defensible government interest that is advanced by the sex discrimination in quest.

The State Department automatically recognizes the citizenship status of foreign-born children of US opposite-sex married couples who use a surrogate or a sperm donor. It does not require both parents to have a biological connection to the child, and treat it as "born out of wedlock" if one parent does not. There is no reason, other than rank bigotry, to deny the same treatment to children of same-sex married couples. The government cannot even claim that the policy is justified by a supposed need to to privilege biological parents over non-biological ones, since the rule does not similarly disfavor non-biological parents in opposite-sex marriages.

Admittedly, the Supreme Court's 2015 decision in Obergefell v. Hodges, which struck down laws banning same-sex marriage, was not completely clear about several aspects of the scope of its holding, including whether it meant that all legal rights associated with marriage must be available to same-sex couples on the same basis as opposite-sex ones. I criticized the mushy nature of Justice Anthony Kennedy's reasoning at the time the ruling came down.

I continue to believe that the Court would have done better to simply rule that laws banning same-sex marriage are unconstitutional because they discriminate on the basis of sex, as Northwestern law Professor Andrew Koppelman and I urged in an amicus brief we filed in Obergefell. Among other things, that approach would have made clear that all government discrimination against same-sex couples is presumptively unconstitutional.

But the Supreme Court has since clarified—in a 6-3 ruling in Pavan v. Smith (2017)—that  Obergefell entitles same-sex married couples to the same "rights, benefits, and responsibilities" of marriage as opposite-sex ones. That surely includes the right to transmit citizenship to their foreign-born children. Even Obergefell itself indicates that one of the main reasons for striking down laws banning same-sex marriage is to ensure that children of same-sex parents have access to "the recognition, stability, and predictability marriage offers." There are few more denials of "recognition, stability, and predictability" than a rule that essentially prevents some children from living in the same country as their parents (or, in this case, from doing so for more than 90 days at a time).

In a similar case decided in February, a federal district court ruled that the State Department policy violates the Immigration and Nationality Act, and therefore chose not to rule on the constitutional issues. That ruling is now under appeal. If the courts ultimately conclude that the State Department policy is permissible under immigration laws enacted by Congress, the combination of Pavan, Obergefell, and Morales-Santana should doom it on constitutional grounds.

If judges conclude that the relevant parts of the INA are ambiguous, lower courts must interpret the statute to treat same-sex and opposite-sex couples equally, in order to avoid constitutional problems. In NFIB v. Sebelius (2012) and other cases, the Supreme Court made clear that it will adopt almost any reasonably plausible interpretation of a federal statute that avoids the risk of making it unconstitutional. I am no great fan of this  "constitutional avoidance" canon. But it is binding Supreme Court precedent, and lower courts have to follow it.

Elsewhere, I have argued that the right to live and work in the US (and other countries) should not be so heavily dependent on a "hereditary aristocracy" of citizenship determined largely by circumstances of birth. But the right way to address this injustice is to increase freedom of movement for non-citizens, not to make the current system of hereditary rights even more restrictive by adding a dose of sex discrimination into the mix. In any event, this broader moral issue does not change the legal analysis that applies to cases like this one.