The small and excellent Daisy Airgun Museum tells the story of America's most iconic manufacturer of air guns, including the famed Red Ryder, the most common first gun for many generations of American children. 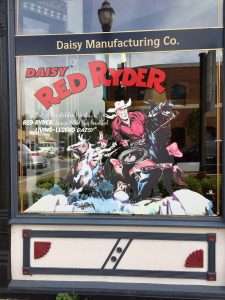 The museum is located in the center of Rogers, Arkansas, about a mile south of Daisy's manufacturing facility in the same city. Admission is only two dollars, and exhibits can be thoroughly examined in about an hour. The gift shop offers Daisy airguns at bargain prices, including remanufactured basic models as low of $15.

While powder arms are powered by burning gunpowder, air guns are propelled by compressed air. As the exhibit shows with airguns as old as 1770, air guns have been around for a very long time. Back in the eighteenth century, some airguns were comparable in caliber and kinetic energy to powder guns.

The Daisy story begins in 1882, with the founding of the Plymouth Iron Windmill Company, in Michigan. Making windmills from iron rather than wood was a good idea, but the windmill market was declining. One of the founders made an air gun in his spare time. When another founder gave it a try, he exclaimed "That's a daisy!"—a common expression of praise at the time. 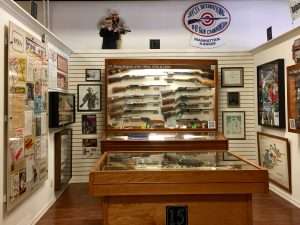 By 1895, the Plymouth Iron Windmill Company had changed its name to Daisy Manufacturing Company and had stopped making windmills. In 1958, the company closed its aging facility in Michigan, and opened a new factory in northwest Arkansas—becoming the leading edge of an economic revival in the region.

The Museum tells the Daisy story from the 19th century to the present, using exemplar guns, vintage advertising, newspaper and magazine articles, and excellent narrative text. There's even a reproduction of the original Daisy.

Daisy made a lot of different items over the years, including toy guns, pop guns, and even powder arms for a short period. During World War II, manufacturers were not allowed to use steel for the domestic market, so Daisy employed its expertise in stamping steel to make artillery canisters, spark plug gaskets for military vehicles, and other war materiel.

But what has made Daisy great has been its air guns. They're not the precision models for Olympic competitors, but rather an affordable and reliable first or second gun for American youth. 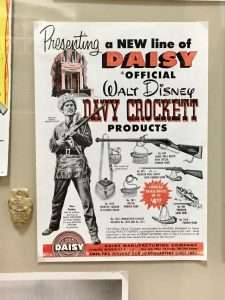 Most famous of the Daisy air guns is the lever action Red Ryder. Gene Shepherd's memoir, later made into the movie A Christmas Story, captures the popularity of the Red Ryder after its 1938 introduction (and for decades afterward).

Incidentally, as the exhibits explain, the particular model that Ralphie aspired to in A Christmas Story, didn't exist on the market. Ralphie wanted a Red Ryder an engraved stock containing a compass and sundial. Daisy never made such a gun until 1983, when the company produced a Christmas Story limited edition.

There's a lot more to learn at the Daisy Museum. Did you know that when astronaut Alan Shepherd became the first man to hit a golf ball on the moon, it was a Daisy logo ball?

Moon shots aside, the Daisy story has been at the wholesome core of America's gun culture for 137 years. The Daisy Museum tells the story with pride and love.

After you finish the Daisy Museum, you can drop by the showroom and store of A.G. Russell Knives, also located in Rogers, Arkansas.

Here's What Happened When Other Countries Rolled Back Abortion Rights

The FDA's War on Juul Will Kill People