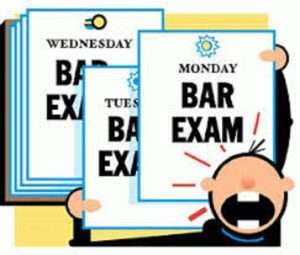 This month, many of my former students will be going through the painful drudgery of studying for and taking the bar exam, as will many other recent law school graduates. Last year, my co-blogger Orin Kerr, wrote a post recounting his experience taking the California bar exam at the age of 46. The whole thing is worth reading. But I wish to highlight this part:

"I know it's crazy stressful now. But it will be over soon, and when it is over you can forget everything you just learned."

The reason why you can "forget everything" immediately after the exam is that very little of the material on the exam is actually needed to practice law. It's a massive memorization test that functions as a barrier to entry, not a genuine test of professional competence. That strengthens the case for my view that the bar exam should simply be abolished. But if that isn't feasible, there is also my "modest proposal" for bar exam reform. I first wrote it up  ten years ago. But I believe it remains just as relevant today:

In this post, however, I want to suggest a more modest reform. Members of bar exam boards… and presidents and other high officials of state bar associations should be required to take and pass the bar exam every year by getting the same passing score that they require of ordinary test takers. Any who fail to pass should be immediately dismissed from their positions, and their failure publicly announced (perhaps at a special press conference by the state attorney general). And they should be barred from ever holding those positions again until – you guessed it – they take and pass the exam.

Of course, few if any bar exam officials or state bar leaders could pass the bar exam without extensive additional study (some might fail even with it). That's because, as anyone who has taken a bar exam knows, they test knowledge of thousands of arcane legal rules that only a tiny minority of practicing lawyers ever use. This material isn't on the exam because you can't be a competent lawyer if you don't know it. It's there so as to make it more difficult to pass, thereby diminishing competition for current bar association members (the people whose representatives, not coincidentally, control the bar exam process in most states – either directly or through their lobbying efforts). Effectively, bar exams screen out potential lawyers who are bad at memorization or who don't have the time and money to take a bar prep course or spend weeks on exam preparation.

Today, I would amend the proposal by adding the requirement that bar leaders must take the exam at the same location and under the same conditions as ordinary test takers. That would create an incentive to end the situation where – in many states –  exams are only administered at one or two locations that are time-consuming and expensive for test-takers to get to.

The time has come to make bar exams great again – or at least less awful than they currently are!