Prattle is an online game in the same vein as Wordle, the extremely popular word-guessing puzzle that debuted in October 2021 and was acquired by The New York Times in 2022. Whereas Wordle requires players to guess a five-letter word in the English dictionary, Prattle restricts the possible solutions to words appearing in the published works of William Shakespeare.

"Prattle is based on the popular Wordle, but with a Shakespearean twist!" write the creators. "All words in this game are ones that Shakespeare used in his plays, poems, and sonnets, as they appear in The Folger Shakespeare online."

Prattle doesn't use every word in the Shakespeare-verse, however. Trying to guess the word slave, for instance, results in the following warning: "Shakespeare did use this word, but we decided not to. Please guess a new word to keep playing."

Roy Thomas, former editor in chief of Marvel Comics and a fan of Prattle, lamented this "mind-boggling bit of virtue-signaling."

"This is the worst kind of pandering, the more so by a company supposedly devoted to major English-language literature," Thomas tells Reason. 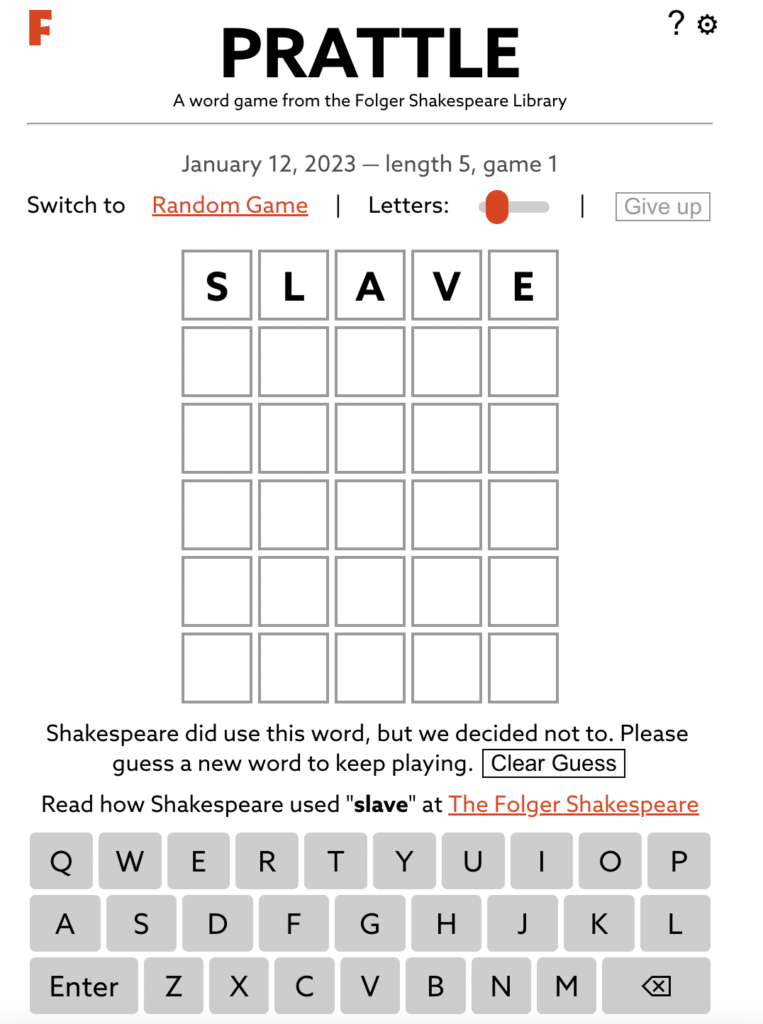 Slave, of course, appears numerous times throughout the works of Shakespeare. In some cases, the bard uses the term figuratively, as in Romeo and Juliet ("let mischance be slave to patience"); in others, such as The Merchant of Venice, he describes actual slaves: "What judgment shall I dread, doing no wrong? You have among you many a purchased slave, which, like your asses and your dogs and mules, you use in abject and in slavish parts  because you bought them."

Slavery is a terrible crime—a shameful evil that engulfed millions of innocent people throughout history. As a state of being, slave is deeply offensive. But is the word itself so offensive as to be utterly unsayable when used figuratively, or even when describing an actual, historical reality?

In the modern U.S., it is sometimes considered good etiquette to say enslaved persons rather than slaves, the former sounding more respectful. Historical tours of Mount Vernon, for instance, make reference to the enslaved persons in George Washington's household. But it's quite another matter to pretend that actual works of literature do not use the (arguably) outdated term; it certainly doesn't make slavery any less bad to pretend the word slave never existed.

Unfortunately, efforts to cleanse the English language of all potentially problematic verbiage seem to accelerate with each passing year. Stanford University's I.T. department recently penned a list of offensive terms and phrases that included "stupid" and "crazy." The Michigan Department of Health and Human Services sent a memo to employees last week asking them to phase out any use of the term field work because of its "implication for descendants of enslaved Black and Brown individuals." But field work is not a term reserved for the experiences of enslaved persons of color. Free people work in fields, too.

As for Prattle, Thomas says that he's unlikely to continue playing it unless it revisits the policy.

"This anti-free speech, anti-intellectual, anti-common-sense action deserves all the scorn it can get," he says.