Earlier this month, a "landmark U.N. biodiversity agreement" was adopted by delegates from 190 countries at the Fifteenth Conference of Parties (COP15) of the U.N. Convention on Biological Diversity in Montreal. The chief goal of the new Global Biodiversity Framework (GBF) is that "the integrity, connectivity and resilience of all ecosystems are maintained, enhanced, or restored, substantially increasing the area of natural ecosystems by 2050." The GBF asserts that around 25 percent of assessed plant and animal species are threatened, suggesting that around 1 million species may already face eventual extinction unless action is taken.

The GBF specifies that by 2030, 30 percent of Earth's lands, oceans, coastal areas, and inland waters are "effectively conserved" and that restoration be completed or underway on at least 30 percent of degraded terrestrial, inland waters, and coastal and marine ecosystems. Currently, 17 percent and 10 percent of the world's terrestrial and marine areas respectively are under protection. In addition, the GBF aims to reduce annual subsidies harmful to biodiversity (e.g., biofuels, fisheries, fossil fuels) by $500 billion; and to cut food waste in half by 2030.

Ecologist Rebecca Nesbit in her new book, Tickets For The Ark: From Wasps to Whales – How Do We Choose What To Save?, launches a sustained frontal attack on the "myth of wild nature." Nesbit hammers home the absolutely correct point that there is no objective scientific standard providing some kind of value-neutral ecological baseline toward which conservation should aim. Since there is no goal or end state toward which any particular ecosystem is heading, who is to say that landscapes and ecosystems modified by human activities are somehow inferior? 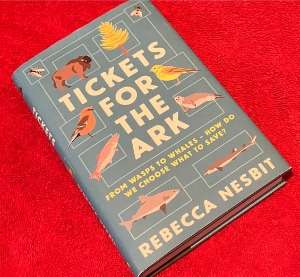 "Ideas about pristine nature invoke a state that nature was in before humans affected it," Nesbit notes. "The trouble is that humans have played a role in shaping nature for roughly 2.5 million years." She explains that species and ecosystems do not have intrinsic value. Instead, humans confer value on them. This realization "should be liberating," she argues, because it makes us "free to discuss logically what we should save and why, and not just fight an anti-extinction battle that is doomed to failure." Nesbit notes that "The resources we dedicate to conservation will never be enough to prevent all extinctions, and we are forced to choose our priorities." As she makes plain, it's tradeoffs all of the way down.

Consequently, her goal isn't to tell readers how we should choose what to save. Instead, she provides a series of case studies showing that human choices guided by our ethical and aesthetic values are inevitable regarding biological conservation.

Let's take a look at a few of the conservation tradeoffs that Nesbit highlights. For example, due to centuries of sheep grazing, the prehistoric birch forests that once covered Norway's craggy mountains have been replaced by meadows. Many Norwegians prefer the hiking and skiing opportunities and magnificent views made possible by sheep meadows to dense birch forests. "This recent baseline for what the natural world should look like has no more moral relevance than a prehistoric baseline, yet it is the form of nature that Norway now aspires to protect," she notes.

Another example is the effort to preserve the flightless brown and white striped Guam rail. That bird was driven to near extinction by introducing brown tree snakes to the island, which ate its chicks and eggs. In 1987, the 22 remaining rails were put in a captive breeding facility. The good news is that rails from the captive breeding project have now been released on snake-free islands near Guam where they have established self-sustaining populations.

Nesbit, however, asked the biologists overseeing rail conservation what happened to the Guam rail louse that lived only on that species. As standard practice, the conservationists had cleared the captured birds of their parasites, thus bringing about the extinction of that parasitic insect. Is the rail more valuable than the louse? And who says so? Conservationists cannot avoid such questions as they choose among species to try to save some from extinction.

Conflicts of values are inherent in conservation. "The people who benefit from wildlife protection are seldom the ones who pay the price," Nesbit observes. "Different people and wildlife benefit from different management, so inevitably there will be opposing outlooks. But it's an advance if, at least, we recognize that there is no historic baseline to aspire towards." She illustrates how opposing outlooks played out in with the case of seals versus salmon in Scotland's Moray Firth.

Seals compete with local fishers for the salmon, so fishers were licensed by the Scottish government to kill seals. On the other hand, tour operators argued for protecting the seals that thousands of visitors came to see in the wild. While no one side was entirely happy, a series of stakeholder discussions led to an agreement in which fishers could cull "rogue" seals.

"Dispensing with the idea that there is an objective 'natural' state of nature opens up huge possibilities for what conservation can achieve," she argues. Among the possibilities is using biotechnology to install a blight-resistant wheat gene in American chestnuts. Literally, billions of these forest giants succumbed to an introduced fungus in the 20th century. The new blight-resistant trees could be restored to their native range in the Appalachian Mountains. Even more ambitiously, biotechnology could combine the recently decoded genetics of extinct wooly mammoths with those of Asian elephants to restore them to the Arctic.

Also, Nesbit urges us to free "ourselves from the shackle of believing that species 'belong' only in their past ranges" so that we can "open up possibilities for assisted colonizations." Conservationists could move creatures threatened with extinction in their home ranges to others where they would be protected and allowed to thrive. For example, Nesbit notes that Chinese water deer are declining in their native Asian range but are expanding in various parts of Europe.

Nesbit also stands firmly against eco-colonialism. The GBF's goal of protecting 30 percent of the world's landscapes and seascapes must not become instances of what Nesbit calls "fortress conservation," in which local people are banished from their lands and livelihoods. "With Indigenous lands representing about a quarter of the Earth's land surface, there is huge potential for synergy between wildlife conservation and upholding Indigenous rights," argues Nesbit. She cites a recent World Bank study that found community-managed forests are more effective at reducing deforestation than strictly protected areas. Hopefully, the signatories to the GBF will uphold its commitments toward "recognizing and respecting the rights of indigenous peoples and local communities, including over their traditional territories."

Nesbit concludes, "Now that we have shaken off the idea of an unobtainable 'pure' nature, we can embrace the possibilities that come from celebrating nature in its many forms. We're not doomed to simply mourn a paradise lost, we're free to create a new form of paradise." Let's get at it.