We're almost halfway through our annual Reason webathon, the only time of the year when we ask our online readers, listeners, and viewers to support our journalism and commentary with tax-deductible donations. Go here to learn about the various swag we're offering this year. (My favorite is the Reason stress ball which can be yours for just $50!). Make no mistake, your generous support is actually critical to our work—we can't do what we do without it. And here's some great news: A Reason donor has agreed to match the next $100,000 of gifts, so your dollars go twice as far if you give right now!

My colleagues Katherine Mangu-Ward and Matt Welch have already talked up what your support helps fund in previous posts, and I've written about our award-winning, eyeball-capturing video platform that got off the ground in late 2007 thanks to comedy legend and Reason Foundation Trustee Drew Carey. You'll be hearing from Features Editor Peter Suderman in the coming days too.

But let me lay out a different case for donating to our print and web journalism, our videos, and our podcasts: Reason is one of the greatest recruitment tools for the libertarian movement, for winning hearts and minds to a vision of "free minds and free markets," of dignity and respect and human flourishing, of autonomy and empathy and innovation, of beautiful, beautiful freedom, baby. We pull an average of 3.8 million visits to this site every month, and our YouTube channel has generated 260 million views (!) since launching 15 years ago. Plus, 41 percent of our video audience is under the age of 35, when people are still forming their political and ideological worldviews.

Established in 1968 by a (literally) mad genius, Reason in all its emanations is a catalog of human possibilities ranging from great art to lifestyle liberation to space exploration and a warning system against the sorts of hubris and coercion that produced so much misery in the last century (and, truth be told, the first 20-odd years of this one).

I became a libertarian primarily because of Reason, which I started reading in high school after my older brother John discovered it while attending Milton Friedman's alma mater, Rutgers University. He started sending it my way—this would have been in the late 1970s—and by the time I followed his path to Rutgers, I was a subscriber for life. Reason didn't just lay out principled philosophical cases for radically increasing freedom in all areas of human activity, it also told fascinating, compelling, dramatic stories of unintended consequences and of triumphs over adversity. Month after month, the magazine drove home the message that governments (and many businesses too!) routinely miscalculate their ability to dictate and control our behavior and mistake their desires for the range of legitimate options. 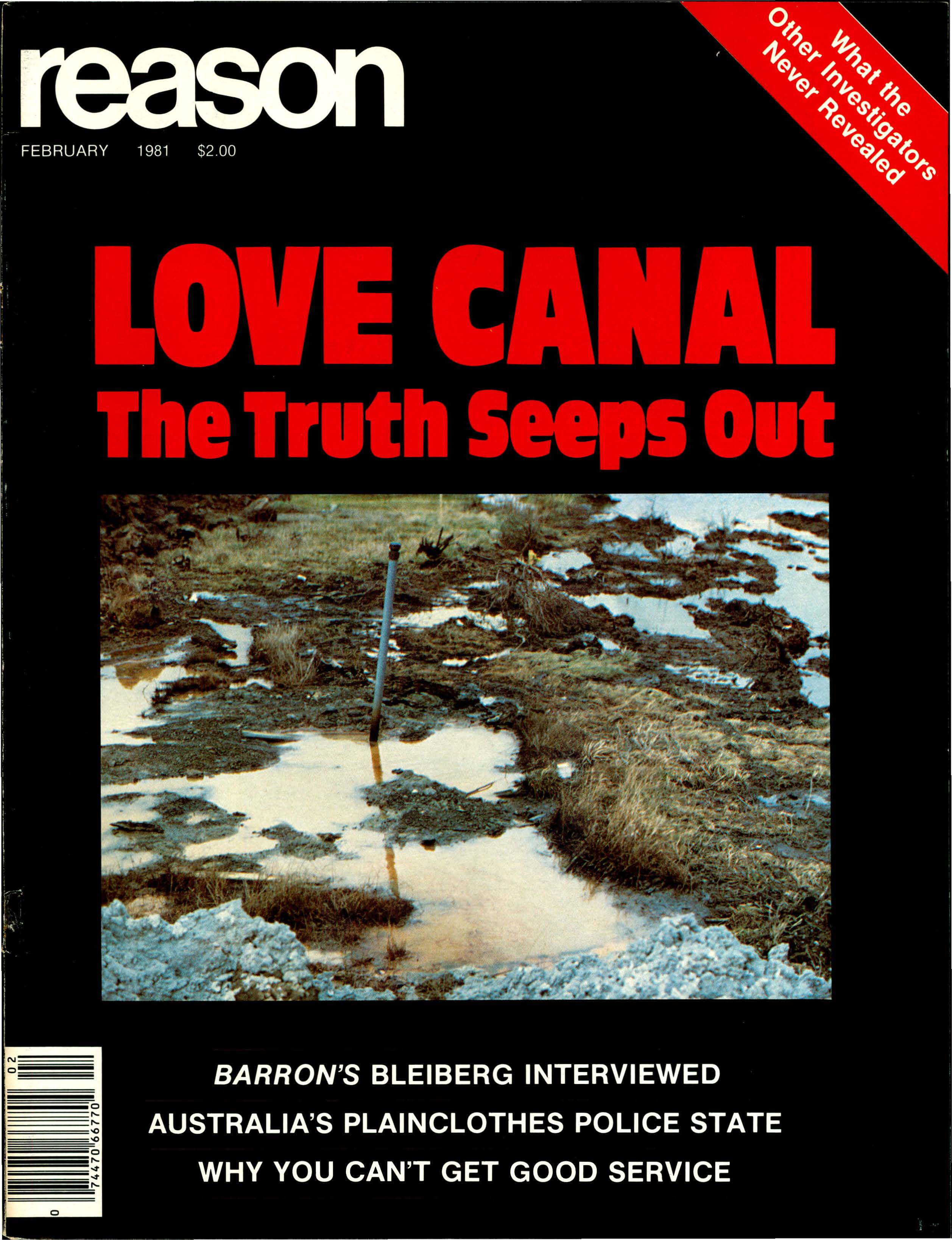 One of the earliest Reason stories I remember reading, "Love Canal: The Truth Seeps Out," was from the February 1981 issue. If you grew up in the 1970s like I did, fear of birth defects caused by corporate villainy was never more than a TV Movie of the Week away. "Love Canal," a toxic neighborhood somehow built on top of a chemical dump in Niagara Falls, fueled such anxieties that it became a national outrage in 1978 due to local activism. Of course a chemical company had secretly poisoned pregnant women, created monster babies, and jacked up cancer rates for the out-of-work folks living in a Rust Belt hellhole!

So imagine my surprise in February 1981, when Reason documented that Hooker Chemicals had sold the property to the Niagara Falls Board of Education in 1953 for $1.00 while explicitly cautioning against building a school on it or selling it to a housing developer. Which the Board promptly did anyway, even as officials from Hooker publicly protested. "Love Canal: The Truth Seeps Out" was among the very first Reason stories I remember reading as an impressionable high schooler. It exemplified the sort of smart, reality-based exposés that shatter the conventional wisdom and became our stock in trade.

Here we are, decades later, and Reason is not just still countering the conventional wisdom on a regular basis (see, for instance, Elizabeth Nolan Brown's new cover story "In Defense of Algorithms") but offering up new ways of thinking about the world and human flourishing. (Watch Zach Weissmueller's "Forget the Great Reset. The Great Escape Is Here.")

Your (tax-deductible!) donations support all our work on all platforms. Thanks for that! Go here now to make a gift—especially because the next $100,000 in donations will be matched by the generosity of a Reason donor!

Here's a livestream that Zach Weissmueller and I did yesterday where we talked with Katherine Mangu-Ward, Austin Bragg, Meredith Bragg, Billy Binion, Robby Soave, and Elizabeth Nolan Brown not just about their work for Reason but also how Reason shaped their understanding of the world. When you support Reason, you're helping to create the next generation of libertarians. And thanks to the donor match happening right now, your dollars will go twice as far!