On October 14, Iranian authorities had put up a photomontage on Vali Asr Street—Tehran's equivalent of Times Square—featuring female artists, athletes, politicians, and academics. The caption read "women of my homeland, Iran." Under normal circumstances, the billboard might have been a cringey piece of patriotic kitsch.

The timing made it a public relations fiasco. The art installation seemed like an attempt to co-opt recent women's rights protests, which the government was in the process of violently suppressing. (At least 200 people have died in the crackdown, including many teenagers.) Several of the celebrities demanded that their pictures be removed.

In a tearful video, actress Fatemeh Motamed-Arya declared her solidarity with 22-year-old Mahsa Jina Amini and 16-year-old Sarina Esmaeilzadeh—both killed by police. Observers even noted that one of the women featured on the poster, photojournalist Nooshin Jafari, was currently in jail for her political views.

Within a day, authorities took all the photos off the billboard. Mehrdad Moazzami, spokesman for the billboard's designers, made a foot-in-mouth statement about the controversy. The installation was supposed to "present a handful of successful women from our homeland," he claimed, "since everyone is talking about women these days."

The Islamic Republic has long tried to portray itself as the hand that giveth and the hand that taketh away. On one hand, police and paramilitaries ruthlessly crack down on street protests, and arrest political figures who step out of line. On the other hand, authorities emphasize their inclusiveness and openness to reform.

The state makes changes, but it portrays them as a magnanimous gesture from a position of strength—or perhaps even a correction the system wanted to make all along—rather than a concession in the face of pressure.

But the strategy can backfire. Like the meme of an older Steve Buscemi dressed as an undercover teenager greeting his "fellow kids," the Vali Asr billboard came off as tone-deaf and out of touch. If people feel that Iran's powerholders are pandering to the opposition without satisfying its fundamental demands, they will be roused to greater anger. 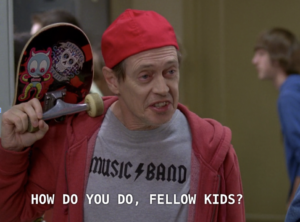 Iran is far from the only state that behaves this way. Saudi Crown Prince Mohammad bin Salman abolished many of Saudi Arabia's infamous restrictions on women, while jailing and torturing the feminists who had demanded those changes. Burma's military dictatorship took a similar attitude when it introduced political reforms known as "disciplined democracy" in 2011.

"I could tell even from these early meetings that [military leaders'] instinct was never to show any weakness," wrote former diplomat Thant Myint-U in The Hidden History of Burma. "Change was possible, even desirable, but it could never seem to have come under pressure."

Iran once looked to be on the verge of a political opening. After winning competitive elections in 2013 and 2015, a Reformist government promised to ease up on some of the Islamic Republic's most unpopular social restrictions, such as Internet censorship and religious dress codes for women.

But after a series of increasingly bold protests and a near-war with the United States, the Iranian deep state charged in the opposite direction. It violently suppressed unrest in November 2019, blatantly rigged the 2021 elections, and stepped up enforcement of dress codes.

Amini, a Kurdish woman, had been arrested for her clothing when she died in police custody last month. Her death kicked off widespread civil disobedience against the dress code, and street protests calling for the end of religious rule altogether. And so resumed the game of carrots and sticks.

Supreme Leader Ali Khamenei declared on October 3rd that women "who don't have complete hijab are among the serious supporters of the Islamic Republic," and praised Kurds' contributions to the Iranian nation, even as he blamed foreign agitators for the protests, a green light for a heavy-handed police response.

Around the time of Khamenei's speech, video emerged of an all-woman riot police unit confronting demonstrators. Their uniforms were somewhat less modest than the clothing the government tries to promote; some observers claimed that those officers would be arrested for immodesty if they were average citizens.

Earlier this week, Iranian rock climber Elnaz Rekabi competed in South Korea without her mandatory headscarf. She then disappeared into the Iranian embassy, and issued an apology that appeared to be under duress, leading to reports that she was about to be imprisoned.

But then something strange happened. Rekabi was given a hero's welcome in Tehran, and officials hinted that she may go on to represent Iran at the Olympics, while insisting that her scarfless performance had been a big misunderstanding. Rekabi even appeared in a photo op with the minister of sports—wearing a baseball cap instead of a headscarf.

In its own peculiar way, the Islamic Republic is acknowledging that the authorities have gone too far, and the system has to make a course correction. But that may not be enough. After a month of tear gas and beatings and gunfire, Iranians may not be convinced to move on so easily.

UPDATE: BBC Persian, citing an anonymous source, is reporting as of October 21 that Rekabi was quietly taken to house arrest.