Next week, Alex Wagner takes over the MSNBC slot once held by Rachel Maddow, who now broadcasts only on Monday evenings. (Wagner will handle the other four nights of the week.) Let's mark the occasion by dusting off the story that Maddow once declared her favorite. It wasn't a super-serious segment. It's one of those little items that's there to make people chuckle as much as it's there to make a point. But jokes can be revealing sometimes, and this one encapsulated the most aggravating element of The Rachel Maddow Show: its host's capacity for unearned smugness.

It was 2010, and Carl Paladino was the Republican nominee to be governor of New York. In the course of the campaign, he periodically said some dumb things, as he is wont to do. He also had lawn signs that said "I'm Mad Too, Carl!" This reminded Maddow of all the times she had seen the face of J.R. "Bob" Dobbs—the messiah of the tongue-in-cheek Church of the SubGenius—alongside the slogan "I'm Mad Too, 'Bob.'" Clearly, she declared, there was a method to all those Paladino gaffes. His campaign, she concluded, is a SubGenius-style art project.

She tells the story in a winding way, launching with a montage of Paladino proclaiming himself mad before she delivers a lecture on the history of "urban street art," which culminates with her introducing the "ubiquitous" image of Dobbs. We then get a review of various embarrassing Paladino moments, with a particular focus on his inability to back up his claims that Gov. Andrew Cuomo had cheated on his ex-wife. The "I'm Mad Too" bit is the punchline dropped at the very end—the wild fact that's supposed to everything together:

Now, I don't want to dwell on the fact that her chief beef with Paladino here involves his suggestion that Cuomo was an adulterer. Yes, it's pretty easy to believe that the Republican was right, given that Cuomo eventually resigned in the face of credible charges of sexual harassment. But Paladino didn't exactly do a convincing job of making his case, and it's fair to go after him for that.

Nor do I want to dwell on her description of the Church of the SubGenius as "iconic 1990s-era American urban street art." The first SubGenius pamphlet actually came out in 1980—but sure, the group was still around in the '90s. And while "street art" was never really the center of the project, it was certainly a part of it. It's an odd way to describe the church, but it's not what makes this piece of television so memorable.

No, the memorable thing is that punchline. The whole joke of the segment is that Paladino had somehow stumbled into accidentally recycling a countercultural slogan. That's what lets Maddow adopt that let-me-tell-you-some-history tone at the beginning of the story, and that's what's supposed to justify all the smirks along the way. But the joke is a bust, because Maddow didn't probe that history enough. When she recognized that phrase from some graffiti she'd seen in the '90s, she should have taken a moment to type "I'm Mad Too" into Google, just to see if there had been any prior art.

Ever hear of a Texas oilman named Eddie Chiles? He founded the Western Company of North America. He used to own the Texas Rangers. And in the 1970s, he started doing fiery radio editorials. Riffing on Howard Beale's famous line from Network—"I'm as mad as hell, and I'm not gonna take this anymore!"—he built a whole persona on how mad he was. His radio spots would start with an announcer saying, "What are you mad about today, Eddie Chiles?" The answer usually involved liberals and/or big government. 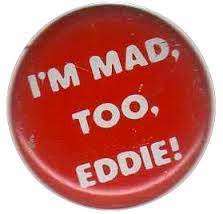 And what slogan did his fans embrace, buying it on bumper stickers, buttons, and baseball hats? "I'm Mad, Too, Eddie!"

The Church of the SubGenius was founded by a couple of Texans. When they dreamed up the phrase "I'm Mad Too, 'Bob,'" they were spoofing a slogan that was all over their home state in the '70s and '80s. Paladino is not a Texan, but that doesn't mean he wouldn't have heard of Chiles too. At their peak, the man's commentaries were airing on 650 stations around the country—and if you didn't hear the spots themselves, you still might see the stories about them on TV and in outlets like Time and The Christian Science Monitor. Or maybe you just saw the bumper stickers. They were at least as ubiquitous as "Bob" was.

Look, I feel a bit ridiculous fact-checking a joke, especially when I'm doing it 12 years late. As far as I know, Paladino's people didn't bother to correct the record. (It's not like they'd be doing their guy any favors by calling attention to the segment.) And the SubGenii were happy to take the publicity, chatting about the story on their Hour of Slack radio show with what was, by their standards, only a small dose of snark. ("It's actually 1980s iconic street art.") When it comes to cable-news fuckups, this is about as harmless as it gets.

But it's the Maddow show in a nutshell. Scroll back up to that video. Watch the glee with which our host delivers her punchline, that smug certainty that she knows a little history that will make someone look foolish. If only she had known a little more history, she might have avoided looking foolish herself.

(For more editions of the Friday A/V Club, go here. For another one involving a cable host looking foolish, go here. For more on the Church of the SubGenius, read chapter nine of my book The United States of Paranoia.)

The Cochrane Library's review of masking trials should sound the death knell for mask mandates everywhere.

The analysis found that wearing masks in public "probably makes little or no difference."

The age verification proposal is a disaster for both children and adults.