Young people are much more fearful of cancel culture than older Americans, but they are also more supportive of it, according to a new report by the Manhattan Institute's Eric Kaufmann that surveys public attitudes toward various culture war items like critical race theory, free speech on college campuses, and diversity training.

When analyzing polling data from a variety of surveys, Kaufmann found that 45 percent of working people under the age of 30 were afraid of losing their jobs because "someone misunderstands something you have said or done, takes it out of context, or posts something from your past online"—i.e., the kind of social sanction typically described as cancel culture. Among Americans 55 and older, just 29 percent had this same fear.

But if younger millennials and members of Gen Z have more to fear from cancel culture, they are also much more willing to say that they accept these terms.

"By a 48–27 margin, respondents under 30 agree that 'My fear of losing my job or reputation due to something I said or posted online is a justified price to pay to protect historically disadvantaged groups,'" notes Kaufmann. "Those over 50, by contrast, disagree by a 51–17 margin. Younger age brackets are both more fearful of cancel culture and more supportive of it than are older age groups."

Kaufmann pushes back against the idea that there's a hypocrisy here: On the contrary, it seems that many young people are taking a self-sacrificial attitude.

"Rather than viewing such individuals as thin-skinned or inconsistent, we should consider them to be adhering to a consistent set of ideas that places the emotional safety and advancement of minority groups above their personal freedom of expression," he writes. "An individual aged 18–25 who fears cancellation has a nearly 60% chance of agreeing that this is a justifiable price to pay to protect minorities, compared with only 10% of the oldest survey respondents who fear being canceled."

That's just one finding of the report, which describes young people's affinity for what it calls cultural socialism, a worldview that "values equal results and harm prevention for identity groups over individual rights" and "has inspired race-based pedagogies and harsh punishments for controversial speech." Kaufmann contrasts this with cultural liberalism, the presumption in favor of free speech, individuality, and due process that compromises the older, default way of thinking about social issues.

These categorizations are somewhat crude, and it's hard to say what's specifically socialist about the newer attitudes. (Thinking that the government ought to prevent private employers from disciplining employees over a misunderstanding or prior social media post could be described as the more socialist stance.) Nevertheless, the survey results are fairly interesting, and the responses to this question and many others all point in the same direction: Young people are far more supportive of cancel culture.

And while ideology remains the very best predictor of support for cancel culture—with progressives supporting it and conservatives opposing it—age was a remarkably useful proxy: Cancel culture drew some support from young Republicans, for instance.

"Younger respondents are significantly more politically biased, even controlling for party identification, race, and gender," writes Kaufmann. "Some 55 percent of [Joe] Biden voters 25 and under would not hire a [Donald] Trump supporter for a job, dropping to 39 percent for the 26–49 group and 29 percent for those over 50. Only 23 percent of young Biden supporters said that they would be comfortable having lunch with a Trump supporter, compared with 42 percent of Biden voters over 25." 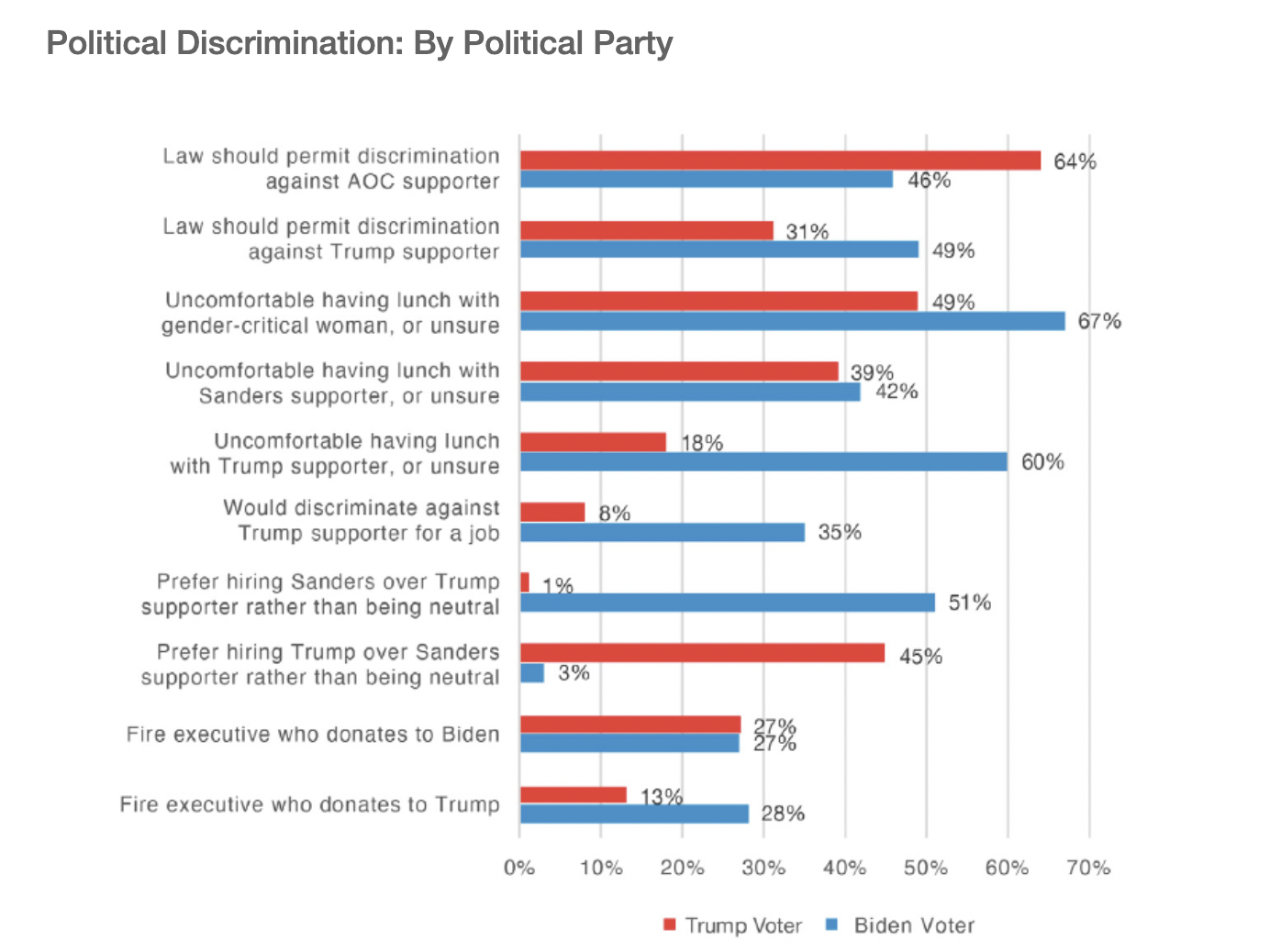 Kaufmann's report does not paint a pretty picture of the future for libertarians. Younger Americans are both more supportive of cancel culture and more interested in using the power of the state to right perceived wrongs. While older Republicans have more of a libertarian streak, and are less willing to consider government action as the right solution, younger Republicans have few such hangups, "indicating a possible generational shift within the GOP base toward a more interventionist and less libertarian form of conservatism."

For those of us who oppose the excesses of cancel culture but do not think that giving the government more authority to set the rules is the right approach, much convincing remains to be done.