"The number of weather, climate and water extremes are increasing and will become more frequent and severe in many parts of the world as a result of climate change," declared World Meteorological Organization (WMO) Secretary-General Petteri Taalas last August. He was making the statement in conjunction with the release of a 2020 WMO report that claimed that the number of weather disasters has "increased by a factor of five over the 50-year period, driven by climate change, more extreme weather and improved reporting." Keep that last caveat in mind. Below is a chart of the weather and climate disasters tallied in the WMO report.

The WMO report relies largely on the disaster data collected by the Emergency Events Database (EM-DAT) established in 1988 by the Centre for Research on the Epidemiology of Disasters. The EM-DAT compiles and reports natural disasters from 1900 until today. However, the compilers acknowledge that the increase over time of the disasters included in the database could in part be the result of improved reporting around the globe.

Similarly, in 2020, the United Nations released its Human Cost of Disasters report, also using EM-DAT data, which parsed global disaster trends between 2000 and 2019. Below is that report's chart tracking the annual toll of disasters around the globe. 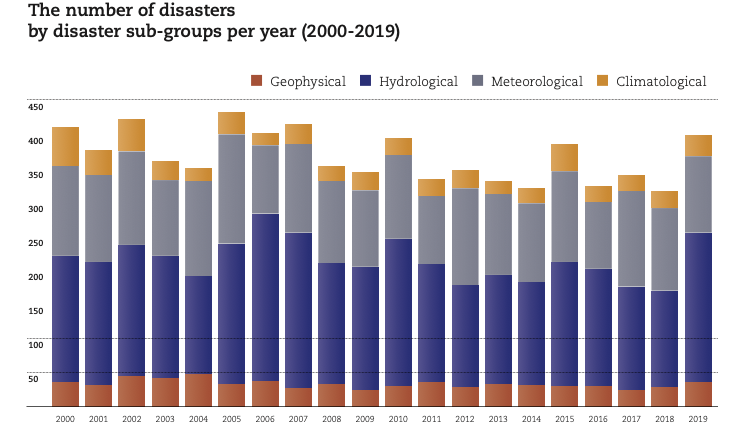 Unlike the WMO chart, the U.N. report included disasters caused by geophysical events including earthquakes, volcanoes, and landslides. Interestingly, six of the 10 deadliest disasters in the past 20 years were earthquakes, killing 657,000 out of 943,000 wiped out by those events (70 percent).

So what does the recent trend in weather and climate disasters look like if the geophysical ones are excluded from the EM-DAT dataset? University of Colorado political scientist Roger Pielke Jr. has done just that and updated it through 2021. 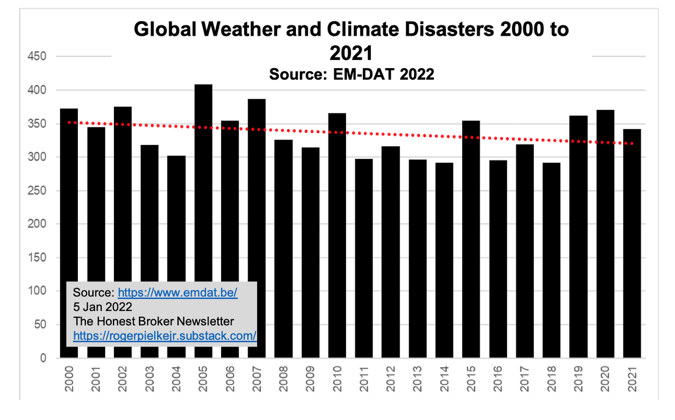 "The data show that from 2000 to 2021, the number of global weather and climate disasters declined by about 10%, which is very good news and completely contrary to conventional wisdom," notes Pielke over at his new Honest Broker Substack. "The period since 2000 is viewed as the most reliable for data reliability, but it is safe to say that even since 2000, coverage has improved. So the 10% decline is possibly an underestimate." Note that even the WMO report shows a decline between the 2000–2009 and 2010–2019 periods.

Pielke properly cautions, "Of course, don't use data on disasters to say anything about changes in weather or climate — data on specific weather and climate variables are always more appropriate for tracking changes in climate." Data such as global temperature and precipitation trends. Humanity is losing more houses and infrastructure to bad weather largely because a richer and more populous world has put much more property in harm's way. Despite the alarmism about increasing weather disaster damages, toting up their costs cannot serve as reliable proof for man-made climate change.