During the first full year of the COVID-19 pandemic, Americans fled from states like California and New York to seek refuge in places with lower taxes and fewer public health restrictions.

New data from the Census Bureau show that 18 states (plus Washington, D.C.) lost population between July 2020 and June 2021. But the losses sustained by most states pale in comparison to the mass exodus from New York and California. The two states lost 319,000 and 260,000 residents, respectively, during those 12 months. Illinois, which has been hemorrhaging population for several years, finished third after losing about 113,000.

But when looked at as a percentage of their overall population, no place took as big of a hit as Washington, D.C, which lost more than 3.4 percent of its prepandemic population in just 12 months.

Overall, fewer people have moved during the pandemic than in a typical year. According to a different set of data released by the Census Bureau a few months ago, moves declined to their lowest levels in at least 70 years in the 12 months between April 2020 and March 2021. But that only serves to throw some of the migration figures into starker relief. Despite fewer moves overall, both New York and California saw a significant increase in the number of people leaving during the July 2020 to June 2021 period. 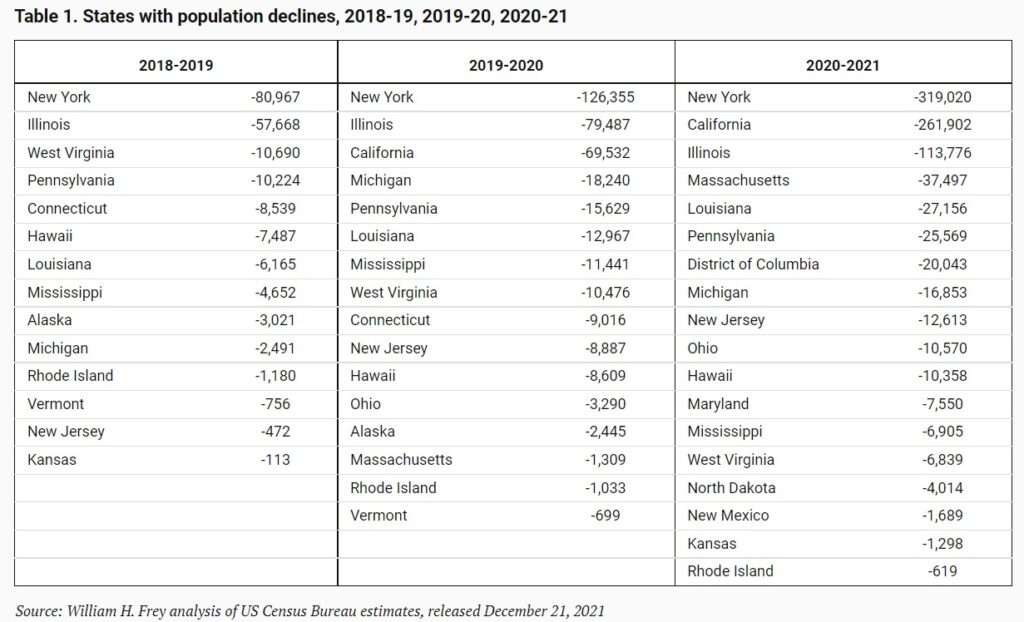 As it did in other ways, the pandemic seems to have exacerbated migration trends that were already underway. California and New York "showed substantially greater losses in 2020-21 than in the prior two years, as was the case for most states that sustained recent population losses," notes William H. Frey, a senior fellow at the Brookings Institution.

Indeed, New York has been losing population for years, and, after decades of explosive growth, California's population was nearly flat over the past decade. Because the rest of the country grew faster, California will see its congressional delegation shrink for the first time ever.

There are many reasons why someone might choose to move from one place to another, and those decisions probably have more to do with individual factors than with political or economic issues writ large. As such, we should be careful about assigning too much meaning to migration figures. Partisans may want to score points by claiming that Americans are moving from blue to red states, for example. And that might even be true, in broad strokes. But it ignores the more nuanced reality, that people make personal decisions based on lots of reasons, many of which are not political.

Despite those important caveats, it's tough to look at the new Census Bureau data without making at least a few generalizations about what made California and New York (and to some extent, D.C.) such remarkable outliers over the past year.

Pandemic policies certainly come to mind. New York didn't lift capacity restrictions on businesses until May of this year, long after similar rules were abolished in most other places. Los Angeles' economic restrictions fell hardest on small businesses, and often made little sense. School closures, where were concentrated in big cities and blue states—places that have, not surprisingly, now seen a corresponding drop in enrollments—made life more difficult for parents and children. "Financial pressure" is the main reason why people say they move, and pandemic-era policies have been ripe for creating new financial headaches for a wide swath of Americans.

But I suspect that what's also showing up in the Census data is something that goes beyond frustration with pandemic rules and school shutdowns. Wendell Cox, an expert in demographics and policy who runs a consulting firm based in St. Louis, notes that D.C.'s loss of about 3.3 percent of its population comes after a period when the district was averaging significant year-over-year population gains for the past decade. Then, he looks at the states gaining population—and not just the biggest ones.

West Virginia and Delaware share some other features with the big population-gaining states like Texas, Florida, and Arizona—namely, low taxes and relatively cheap land (with some exceptions, of course).

To the extent that remote work (or part-time remote work) is here to stay, places like West Virginia and Delaware stand to be huge winners in the post-pandemic sorting out along the East Coast, where the geography of having lots of states bunched close together makes for more robust competition. If you only have to go into the office once per week, more people may opt to avoid paying the high cost of living and high taxes that come from living in New York City, Washington, D.C., or their suburbs.

Of course, most people will stay. Even after a year when it lost a stunning percentage of its population, 96 percent of Washingtonians are still Washingtonians. New York City will remain one of the world's biggest economic engines, and California will always have nearly boundless natural resources.

But the number of Americans that moved during the pandemic should send a signal to policy makers about what's happening on the margins. Competition between the states is real, and the eventual end of pandemic restrictions won't automatically halt the trends that COVID has kicked into high gear.

In a world where more workers are empowered to live where they like, some states won't like where workers choose to live.